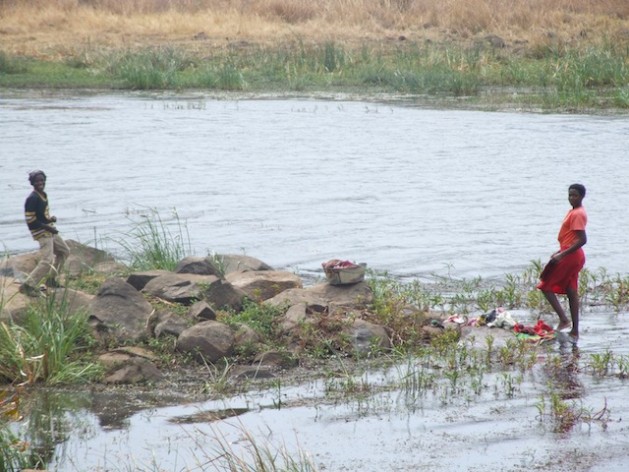 Villagers in Zimbabwe’s Mwenezi district have not had access to running water for more than a decade after more than half of the boreholes in the broke down. Credit: Jeffrey Moyo/IPS

HARARE , Apr 25 2013 (IPS) - For the last 13 years, Trynos Mbweku, the headman of Mwenezi district in southeastern Zimbabwe, has had to use a cart to fetch water from the only remaining borehole in his area, which lies some 10 kilometres from his home.

For villagers in this district, which is about 160 km southwest of Masvingo, the capital of Masvingo Province, the water crisis seems to have no end in sight.

“We have been reduced to becoming water scavengers owing to several dysfunctional boreholes that broke down over 10 years ago,” Mbweku told IPS.

Officials from the Mwenezi Rural District Council, who requested anonymity, told IPS that out of a total of 46 boreholes in the district, 26 had broken down and had not been repaired for the last 13 years.

Locals blame the District Development Fund (DDF) and the Mwenezi Rural District Council, which are responsible for repairing and maintaining the boreholes.

But officials from the Mwenezi Rural District Council said that over 120,000 dollars was required for repairs, and that the DDF was underfunded and could not afford it.

Zimbabwe is still recovering from an economic crisis. Between 2003 and 2009, the country had one of the worst rates of hyperinflation in the world – year on year inflation was reported as 231 percent.

However, economists in this Southern African nation attribute the deepening water woes here to the forced departure of agricultural investors at the height of the country’s controversial and often violent land reform programme, which began in 2000. The programme was a government initiative that attempted to reclaim land from almost 4,500 white commercial farmers, and was carried out by disgruntled war veterans.

“The water crisis is Zimbabwe’s national problem. It worsened after the 2000 chaotic land reform programme, which saw a downturn in the country’s economy. It resulted in the country losing revenue to maintain community boreholes when productive commercial farmers were evicted from their farms,” economist Kingston Nyakurukwa told IPS.

With around 70 percent of Zimbabwe’s population living in rural areas, improving access to water, sanitation and hygiene is critical. Although the United Kingdom’s Department for International Development funded a 50-million-dollar rural water and sanitation hygiene programme in 2012, which aimed to benefit drought-prone areas, most of rural Zimbabwe has difficulty accessing safe drinking water.

“We are grappling with water shortages here because several community boreholes broke down and have been out of use for years now, owing to the country’s poor economy,” Dereck Siyaya, an agricultural officer based in Guruve, a rural district in Mashonaland Central Province, told IPS.

According to figures from a 2010 United Nations Children’s Fund report titled “Child-Sensitive Social Protection in Zimbabwe”, almost half the population lives below the poverty line of 1.25 dollars a day.

A top official from the Ministry of Water Resources Development and Management told IPS that about 60 percent of rural water pumps, out of a total of about 2,714, were broken.

“Failure to act on the water crisis in the country will see Zimbabwe fighting over the precious liquid … we must commit to a sustainable water sector,” Minister of Water Resources Development and Management Samuel Sipepa Nkomo said at a water summit on Mar. 20 in Bulawayo.

A senior government official from the Ministry of Education, Sports and Culture told IPS that rural school children were also affected as they invested considerable time in fetching water instead of attending classes.

“The water crisis in rural areas has resulted in school pupils spending much of their time fetching water for their teachers alongside ordinary villagers also hunting for the precious liquid,” the official said.

In 2009, Zimbabwe signed an agreement with the U.N. Educational, Scientific and Cultural Organization, the World Wide Fund for Nature and the Institute of Water and Sanitation Development, Zimbabwe, to raise funds to supply clean water to the local population. But four years later, the agreement is yet to be implemented.

In order for Zimbabwe to reach the U.N. Millennium Development Goals to increase improved access to water sources, the country needs an investment of 400 million dollars per year, according to a 2010 U.N. Children’s Fund report. There are eight MDGs that were adopted by all U.N. member states in 2000 in order to curb poverty, disease and gender inequality.