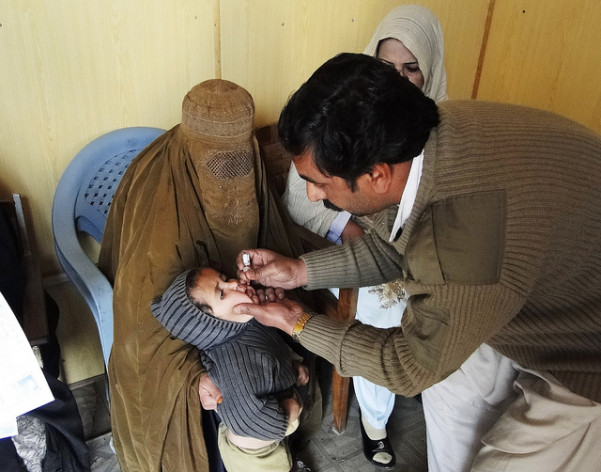 A child is vaccinated for polio outside Peshawar, Pakistan. Credit: Ashfaq Yusufzai/IPS

The new brief has been published by InterAction, a Washington-based umbrella of international NGOs, is supported by 37 organisations. It warns that any future cuts to these programmes would endanger important health milestones achieved in part due to U.S. assistance.

We have a choice: we can invest now or pay forever.

These include the near-eradication of polio and the treatment of over five million people living with HIV/AIDS. In addition, the brief warns that austerity-related budget cuts that went into effect on Mar. 1 could lead to the re-emergence or worsening of critical global health threats, like those posed by the spread of malaria and tuberculosis.

“The U.S. is at a critical juncture in its global health efforts: budget pressures threaten the global health gains that have been made and jeopardize programming … Capitalizing on our successes and meeting emerging global health challenges will require increased and sustained commitments by all donors,” the brief says.

But the warning is competing with snowballing enthusiasm for budget-cutting that has seized Washington since the recent cuts, known here as the “sequester”, went into effect. Cutting roughly five percent of all federal budgets, analysts say the sequester would slice around 433 million dollars from U.S. global health aid for the remainder of this fiscal year alone.

The United States is the world’s largest individual donor to a spectrum of global health initiatives.

“Sustained US investments in global health programs and health systems strengthening are crucial – health problems will only be more expensive and more difficult to resolve in the future, especially with the rise of non-communicable diseases (cancer, lung and heart-disease and diabetes) in all populations,” the brief says.

Sequester-related cuts have been forced to impact on nearly all federal programmes, with Congress purposefully designing them so that neither policymakers nor agency heads could target the reductions at waste or initiatives of low priority. Critics note that foreign aid generally only constitutes about one percent of the U.S.’s total budget – with just a tenth of that for global health.

Nonetheless, U.S. spending still has an outsized impact on global health projects. Indeed, the United States has taken on an even more expanded role since the 2008 financial crisis led other donor countries to cut their aid programmes.

Newly released data from the Organisation for Economic Co-operation and Development (OECD), a grouping of rich, industrialised countries, has revealed a 5.4-billion-dollar decline in general international aid flows worldwide in the past year.

Advocates have expressed particular concern about the future of U.S. health assistance because it does not have the deep political support that bolsters other kinds of foreign developmental assistance. Projects for which mutual economic opportunities for donor and recipient countries are far more visible – such as improving infrastructure or trade, for instance – tend to benefit from deeper political support than that for health aid.

“Domestic donor interests have much more influence in donor capitals where aid decisions are being made,” Gregory Adams, head of the aid effectiveness programme at Oxfam International, a humanitarian group, told IPS. “The more locally owned and demand-driven aid gets cut first.”

Adams listed the Global Fund to Fight Aids, Tuberculosis, and Malaria, an international financing organisation, as one of the groups that is affected by this decision-making bias.

Indeed, on Monday the Global Fund announced a massive new 15-billion-dollar fundraising goal. If it attains this goal, the group says it will be able to prevent a million new HIV infections and save the lives of almost six million people with tuberculosis.

“We have a choice: we can invest now or pay forever,” Mark Dybul, executive director of the Global Fund, said Monday. “Innovations in science and implementation have given us a historic opportunity to completely control these diseases. If we do not, the long-term costs will be staggering.”

Oxfam’s Adams further warns that there is a “double problem” with foreign aid.

“It’s not just that the [aid] is not getting to the people who need it, but you take these countries that trusted the United States and give them reason not to trust the U.S,” he said.

“We keep asking partner countries to show more leadership – to do a better job of leading and meeting their own countries’ needs, but sometimes the global donor country makes it very difficult for those countries to plan their leadership by changing the goal posts.”

In addition, failure to follow through on health assistance could introduce the additional obstacles of reduced immunity and new drug-resistant strains of a disease, particularly with malaria and tuberculosis.

“History shows that if we scale back funding, malaria will re-emerge worse than ever, especially since populations with reduced immunity will face an increase in morbidity,” the InterAction brief states.

In March, the World Health Organisation issued a statement on the increasing spread of drug-resistant tuberculosis, a growing public health crisis due in part to its history of incomplete treatments in developing countries. A study in August 2012 found that almost half of TB patients were not responsive to either first- or second-line treatments, suggesting the disease could become “virtually untreatable”.

For now, health and aid groups are expressing fear, uncertainty and a fair amount of outrage as they wait to feel the concrete effects of the March cuts.

“The sequester is going to have a significant and detrimental effect,” Oxfam’s Adams said. “[But] it’s a blunt instrument – it’s hard to predict how the axe is going to fall.”