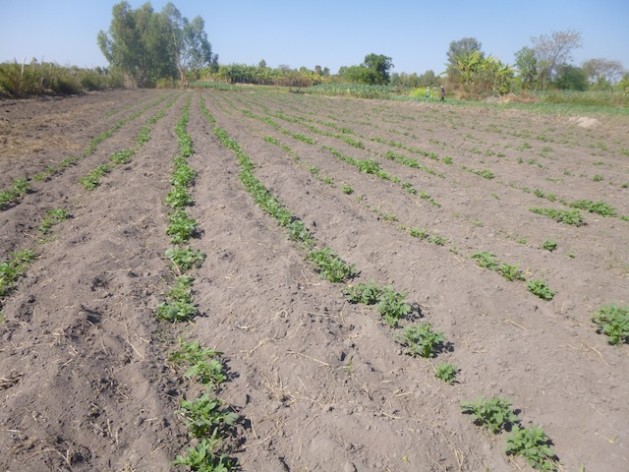 But he lives in an area that is one of Zimbabwe’s most drought-prone.

“Yes, we hear world governments often meet to discuss ways of combating the impact of climate change, but truly I have neither seen nor heard about anything good that has come out of such talks. Drought has become part of our lives here in Mwenezi. If the rains come, it’s either too much or too little,” Duri told IPS.

In 2012 the United Nations Development Programme commissioned a 8.3-million-dollar project to incorporate climate change policies into a national plan.

“Let’s have a budget line to address our own climate change challenges in Africa. Climate change is an issue of life and death and African governments need to implement climate change policies like yesterday." -- Professor Godwell Nhamo

However, Veronica Gundu, Zimbabwe’s principal climate change officer in the Ministry of Environment and Natural Resources Management, told IPS that the money was not enough. Additional funding of 170,000 was received from the Common Market for East and Southern Africa, but this too was short of the 400,000 needed to complete public consultations for the draft National Climate Change Policy.

“There is no fixed amount available for climate change adaptation. It’s not yet clear, but we are likely to get estimate figures from the action plan we are developing,” Gundu said.

The Africa Development Bank estimates the cost of climate change mitigation in Africa will be between 22 and 30 billion dollars annually by 2015, and between 52 and 68 billion yearly by 2030.

In 2009 at the world climate change talks in Copenhagen, developed nations pledged 100 billion dollars by 2020 for the Green Climate Fund (GCF).

The Oversees Development Institute stated in a recent report that developing countries had only contributed just over 10 million dollars to the fund to date, with South Korea, a developing nation, pledging the most – 40 million dollars. And at the November climate change talks in Warsaw, Poland, developed countries failed to make further pledges to the fund.

Many African countries are unable to even access the limited funds in the GCF.

“For climate change adaptation funds, countries need to establish national implementation entities which would help them access funds, but funders have their own stringent and very specific requirements to be met for funds to be granted,” Farai Madziwa, programmes manager for Heinrich Böll Stiftung southern Africa, a foundation that deals with sustainable development, told IPS.

“The challenge faced by African countries seeking climate change funding is the capacity to meet the requirements in terms of the expertise and resources needed to access climate funds,” he said.

He explained that African governments were battling with how to move funds within the national budgets and how to set up institutional instruments to handle climate change funds in order to ensure the smooth flow of funds down to local level.

“The challenge that is there is how to streamline the national budgeting processes and channel money from the national fiscus to trickle down to the provincial level, streamlining down to the municipal level, where the actual climate impact is happening,” he said.

Jerome van Rooij, co-director for the African Climate Finance Hub, a South African-based advisory and research organisation working in Sub-Saharan Africa on the supply and demand side of climate finance, told IPS that not all African countries even have climate change policies.

“There are instances where draft policies have been put in place, but have not been approved by cabinet. Climate change is not considered a priority in other African countries owing to lack of political will,” he said.

Professor Godwell Nhamo, chief researcher and chair of the Exxaro Chair on Business and Climate Change at the University of South Africa, told IPS that it was time for African governments to make money available to address their own climate change challenges.

“African governments have a social obligation to address climate change issues. Finance ministries must allocate the funds, but the bottom line is where should the money for adaptation come from? A lot of people think there is a big pot of money from the developed world, but these countries are also struggling financially,” Nhamo said.

“Let’s have a budget line to address our own climate change challenges in Africa. Climate change is an issue of life and death and African governments need to implement climate change policies like yesterday,” Nhamo added.

Zimbabwe, a nation that is bankrupt, has called on other African governments to do so.