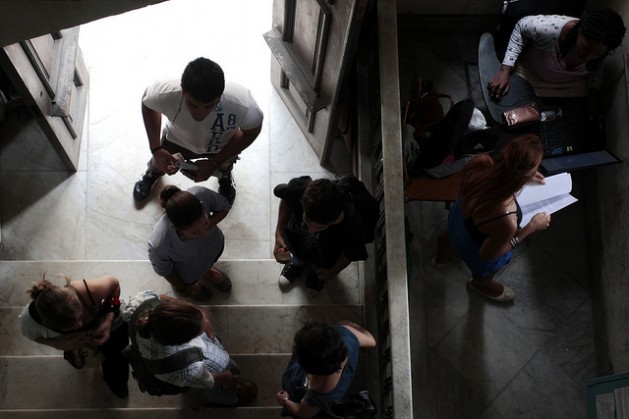 Students of communication at the University of Havana. Coursera was recently forced to suspend service in Iran, Sudan and Cuba. Credit: Jorge Luis Baños/IPS

WASHINGTON, Jan 29 2014 (IPS) - Even as the United States and European Union begin to lift some sanctions on Iran, U.S. law continues to prohibit some businesses that provide non-controversial services, such as online education, from operating in Iran and other countries.

Coursera, a California-based company that works with top-tier universities around the world to provide free online university-level classes to millions of students, has recently suspended service in Iran, Sudan and Cuba.

"When you have something like an embargo, which is so large and overreaching, you can’t really fine tune it to include certain things and not include other things." -- Lisa Ndecky Llanos

“Last week, Coursera received definitive guidance indicating that access to the course experience is considered a service, and all services are highly restricted by export controls.”

Because the U.S. government’s strict interpretation of services includes functions as far-reaching as the grading of assignments and the operation of discussion forums, Coursera has had to cease operations in certain countries or face legal repercussions.

While the U.S. Office of Foreign Assets Control (OFAC), the body of the Treasury Department responsible for implementing sanctions, does not comment on specific licences, it points to licensing exemptions for educational purposes.

Coursera has stated that it remains committed to taking action to operate in Iran, Sudan, and Cuba once more.

“Coursera is working very closely with the U.S. Department of State and Office of Foreign Assets Control to secure permissions to reinstate site access for students in sanctioned countries,” Coursera wrote on Tuesday in a blog update concerning the issue. “The Department of State and Coursera are aligned in our goals and we are working tirelessly to ensure that blockage is not permanent.”

While Coursera initially interrupted its service in Syria as well, the State Department later informed the company that OFAC had a general license in place in Syria for institutions working to increase access to education. Since then, Coursera has restored access to its classes for Syrian students.

However, unlike in Syria, OFAC sanctions programmes on Iran, Sudan and Cuba, do not have a general educational license exemption. Nonetheless, Coursera remains committed to operating in those countries again.

Coursera is not the first education programme that has been adversely affected by U.S. sanctions. Educational Testing Service (ETS) was prohibited from administering the TOEFL test, an English proficiency exam that non-native English speakers have to pass in order to enter most American universities, in Iran in 2010.

Because TOEFL qualifies as an education programme, ETS was eligible to apply for an exemption with OFAC. But it could only do so after considerable difficulty, including finding a bank able to legally facilitate financial transactions with Iran.

Rather than navigate OFAC’s bureaucratic maze to apply for exemptions and risk potential criminal persecution, businesses often opt instead for blanket discrimination against Iranians. Recently, TCF Bank terminated the accounts of Iranian students studying at the University of Minnesota over fear of violating sanctions.

In 2012, Apple refused to sell products to people speaking Persian in their stores, citing the U.S. embargo on doing business in Iran.

But Abdi said Apple experienced public backlash for this decision. “The company has changed its policies as a result,” he noted, “even if they deny that was the reason.”

In addition to hindering access to education, some analysts and legal experts argue that the sanctions actively undermine U.S. interests around the world.

Ebrahim Afsah, an associate professor in international law at the University of Copenhagen, teaches a Coursera class called Constitutional Struggles in the Muslim World, which has thousands of participants worldwide, especially in the Middle East and North Africa.

Afsah says he was particularly upset when he learned about the effect of U.S. sanctions on access to his course.

“I don’t think there’s a conceivable scenario where this could harm U.S. interests, so I don’t think it’s a very wise way of forming legislation – and it’s certainly counterproductive,” Afsah told IPS.

Afsah believes that courses such as his serve as valuable tools for students living in Middle Eastern countries, particularly those with rigid state control over educational systems. He says the course allow students to openly engage in debate and to learn about their peers in other countries in a less polemical atmosphere.

“My course in particular has done a good job bringing these people together and making these people aware of some of the problems they encounter, not least the sectarian divide between Sunnis and Shias, which we’ve had some very good discussion on,” Afsah said.

As the U.S. seeks to contain a rapidly spiralling conflict between Sunnis and Shias in Iraq, Syria and Lebanon, fostering increased intellectual understanding between people in the region is essential to combating the very sectarian agendas the U.S. government seeks to contain.

Lisa Ndecky Llanos, of the Centre for Democracy in the Americas, a Washington-based think tank, attributes Coursera’s closure in these countries to the far-reaching nature of overzealous embargos.

“This situation with Coursera is a way of showing that when you have something like an embargo, which is so large and overreaching, you can’t really fine tune it to include certain things and not include other things,” Ndecky Llanos told IPS.

Although sanctions on Cuba are ostensibly intended to force President Raul Castro to implement government reforms, the side effects of the sanctions run counter to stated U.S. interests, she said.

“The stated U.S. policy is that they want to enable Cubans to access information and be a part of a global community, but in this instance the policy is doing the exact opposite of that,” Ndecky Llanos said.

“U.S. sanctions have really isolated Cuba and the Cuban people. That’s not the intention of the sanctions but it’s the result, and it’s harming Cubans not to have access to sites like this and, in the grander scheme, quick Internet access and telephone services.”