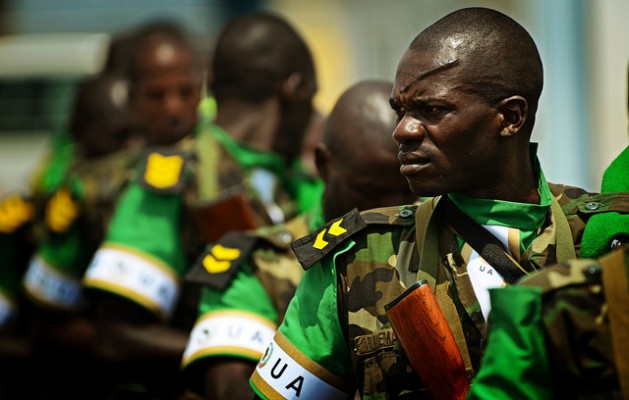 ADDIS ABABA, Feb 4 2014 (IPS) - There are growing concerns that the massive funding crisis for peacekeeping operations in the Central African Republic (CAR) will jeopardise any prospect of restoring stability to the country.

“The resources being allocated to the crisis are so inadequate to the task. The notion that a few thousand troops – even if they were well-trained and equipped, which is true for the French and some, but certainly not all, of the African contingents – are enough to provide security for an area larger than France itself is risible at best,” Peter Pham, director of the Africa Centre at the Atlantic Council, a research institute for U.S. and European policy approaches to Africa, told IPS.

“The notion that a few thousand troops ... are enough to provide security for an area larger than France itself is risible at best.” -- Peter Pham, director of the Africa Centre at the Atlantic Council

As peacekeepers in CAR recaptured the key town of Sibut from rebel fighters on Feb. 2, donor countries made a 315-million-dollar pledge to boost peacekeeping operations in the conflict-ridden country. But this response from the international community has been criticised for being tardy and insufficient to adequately equip the fledgling African Union (AU) mission and fill a security vacuum that has caused 2,000 deaths.

“That’s why the forces have largely limited their activities to Bangui, the country’s capital, and one or two other centres while the countryside has largely been left unsecured,” Pham said.

Vicious attacks and counter attacks between Seleka-aligned Muslims and Christian vigilante militias displaced a quarter of the country’s 4.6 million people and plunged the land-locked nation into bloody anarchy.

The new funds offer modest support to the cash-strapped International Support Mission to the Central African Republic (MISCA) – an AU-led operation currently around 5,500-strong supported by 1,600 French troops. But Pham says a poverty of resources for overstretched peacekeeping troops will fail to de-escalate violence spreading throughout the lawless jungle countryside. The impact of the conflict goes beyond CAR as the violence threatens to destabilise the region.

To try and close the funding gap the international community, including Japan, Norway and Luxembourg, pledged 315 million dollars – which is just short of MISCA’s operational budget of 409 million dollars for 2014. The largest single donation came from the Central African Economic Community, which pledged 100 million dollars to the MISCA force.

In addition, the United Nations World Food Programme has requested 95 million dollars from donors to stem a spiralling humanitarian crisis and provide food assistance to the population.

The European Union (EU) donated 61 million dollars, half of which will support MISCA. The other half will be dedicated to the preparation of elections at the earliest date possible to hasten a return to constitutional order. The EU also plans to send 600 troops by March to support the AU force.

“The EU is committed to financially supporting the AU to find military equipment for the troops, MISCA is still establishing its modus operandi and is in urgent need of equipment to support the troops,” Nicholas Westcott, Africa director at the European Union, told IPS.

Although France has requested that the U.N. take over the peacekeeping operation, the AU maintains that MISCA should lead the mission for at least 12 months to allow the regional force to show its military mettle. MISCA comprises soldiers from the Central African countries of Burundi, Rwanda, Chad, Gabon and Congo-Brazzaville.

The appointment of Catherine Samba-Panza, mayor of Bangui, as interim president of the transitional government, has also raised hopes that a return to political process might stem the blood-letting between Christian and Muslim groups. Her election follows the resignation of Djotodia and his prime minister on Jan. 10 due to international pressure.

“The new transitional government does not have more financial capacity than the previous one but, when it comes to the reconstitution of state security forces, it has three advantages. It has more competence within its ranks, it has more legitimacy in the eyes of the Bangui population and it has the backing of the African and French security forces and the Europeans,” Thierry Vircoulon, from the International Crisis Group, told IPS.

The newly-elected interim prime minister, Andre Nzapayeke, attended a donor event at the AU headquarters in the Ethiopian capital Addis Ababa and said his country needed “a real Marshall plan” and that “in a period of international economic crisis these pledges have a special value.”

“Uncoordinated, atavistic violence of the sort we are seeing in CAR cannot be stopped by military force alone since both the would-be killers and their victims are largely civilians. Rather, it requires massive police forces to prevent multiple small-scale atrocities over a sustained period and, then, an extended period of dialogue and peace building to restore peace in the community,” Pham said.