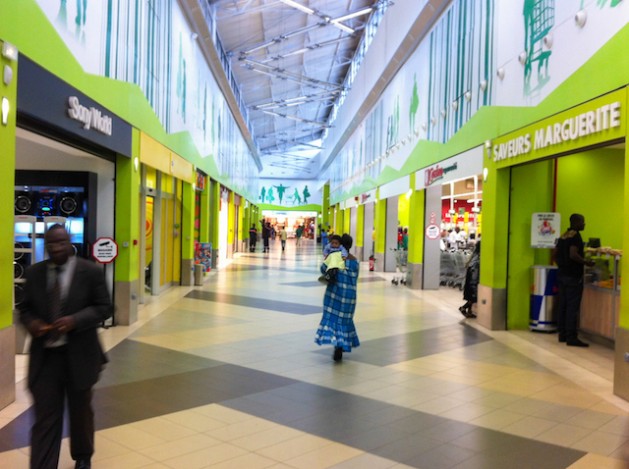 A shopping mall in Côte d’Ivoire. While malls like this appeal to the upper middle class and the upper classes, several supermarkets and stores are beginning to targeting the middle class. Credit: Marc-André Boisvert/IPS

But while Anoh freely talks about her economic status, not many others brag so easily about being middle class in this West African nation.

Defining the African “middle class” is a challenge. For the World Bank, it comprises everyone who earns between two and 20 dollars per day. It’s a range that is far too broad and while the African Development Bank uses the same income range, it emphasises the need to subdivide the middle class into two.

The middle class here has become a more diverse, complex grouping that is not necessarily just comprised of civil servants anymore.

Côte d’Ivoire used to have the strongest middle class in West Africa until it was seriously hit by the post-1980 economic meltdown and the recent post-electoral political crisis from 2010 to 2011. More than 3,000 people died in the violence that followed former Ivorian president Laurent Gbagbo’s refusal to concede victory to current President Allassane Ouattara. Now the Ivorian middle class represents over two million of this country’s 23 million inhabitants, according to government figures.

While Côte d’Ivoire’s middle class may have shrunk, there are signs that this economic group appears to be slowly starting to increase. But its expansion remains limited by two decades of economic problems and conflict.

According to the Moscow-based Institute for Emerging Market Studies, the African middle class will rise three times from 32 million in 2009 to 107 million by 2030 — the largest increase in the world. And with the World Bank predicting that Côte d’Ivoire’s economy will grow at a rate of 8.2 percent for 2014, there is hope that this boom will lift many more of the country’s people out of poverty.

“Houphouet-Boigny [implemented] several policies to transform a middle class dependent on the state into an entrepreneur class. The state fostered the middle class to invest in cocoa or palm oil plantations as a way to build a middle class that would also be able to produce goods.” 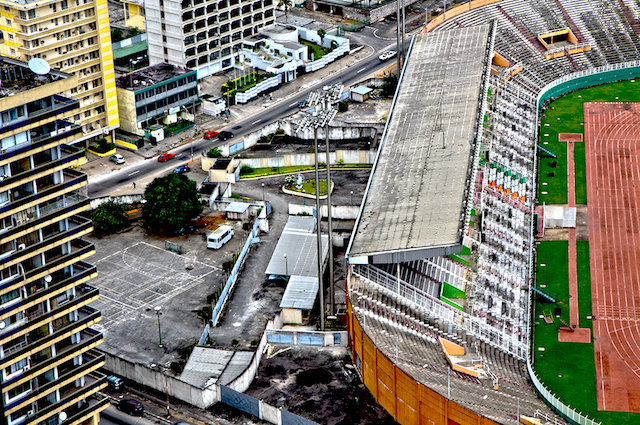 The Felix Houphouet-Boigny stadium and the surrounding buildings in downtown Abidjan were built during his presidency when Côte d’Ivoire was a West African economic miracle that favoured the emergence of a middle class. Credit: Marc-André Boisvert/IPS

Jean Coffie is a retired civil servant and an example of what Houphouet-Boigny dreamt of for the middle class. He is an entrepreneur who lives off his investments.

“My pension is not enough to live on. But I invested in hevea [rubber trees]. Income is random but I still earn more with that than from my government pension,” he tells IPS.

With this extra money, he is helping pay for his grandson’s studies in France. But Coffie is quick to point out that life for a middle class Ivorian is not what it used to be.

“At the time [during Houphouet-Boigny’s presidency], we had a lot of support to develop ourselves. University [education] and health care were more accessible. We might still be middle class but we lost all our privileges.”

“The middle class has shrunk. Twenty years ago, teachers and doctors were middle class. Now, they can’t afford a new car. The Ivorian middle class lost its purchase power.”

Purchase power is a key word. Accountants differ with economists in their understanding of the middle class; rather than analysing income, they look at disposable revenue.

Being middle class is about hitting a “sweet spot”, where people are able to spend money for things other than survival, says a report from accounting firm Ernst & Young.

Marcel Anné is the managing director of the supermarket chain Jour de Marché, which is situated in downtown Abidjan, the country’s economic capital. He has a good view of the emerging consumer class.

“Actually, this supermarket is less crowded than it used to be but this is more about changing consumer habits. This used to be [a] central [spot] for the middle class. Civil servants would buy things here and then go home,” he tells IPS.

The middle class here has become a more diverse, complex grouping that is not necessarily just comprised of civil servants anymore. The privatisation of companies, the need for qualified labour work in IT and on the new oil and gas fields have diversified this economic grouping.

And around Abidjan, the housing boom too suggests that there is a rising middle class.

Riviera Palmeraie, a former plantation where palm oil trees were cut down to make space for several small bungalows, has been one of the first major housing developments in Abidjan based on affordable units.

And now similar developments are slowly spreading across the city and beyond.

Ousmane Bah is the director of Alliance Cote d’Ivoire, one of the companies building middle class housing. His company will build the Akwaba Residence, one of many housing developments being constructed along Abidjan’s outskirts. Prices for homes start at 21,000 dollars for a two-room home and 36,100 dollars for four rooms.

“It targets mostly the young professionals starting up in life, as well as civil servants,” he tells IPS.

His project, like several others, is supported by the government and is part of an initiative to boost social housing for the middle class.

The government targets households with a revenue of less than 840 dollars per month. Buyers only need to provide a 10 percent cash deposit, and then benefit from a government-backed loan with low interest rates of 5.5 percent.

It addresses a difficult problem that seriously limits the growth of the Ivorian middle class: lack of credit.

“People are not used to buying flats here. They rent. Credit institutions are not used to provide housing loans. This is a big issue. We cannot simply build and expect people to buy,” says Bah.

Mohamed Diabaté is the first to agree.

“This is ridiculous. I wanted to get a credit for my house. It was easier to get credit to buy a goat for a Muslim holiday than having a real sustainable project. They did not even look at my file,” the 40-year-old IT specialist tells IPS.

He says even though he has a “comfortable revenue” and a steady job for 12 years, he could not obtain a home loan.

Benie Kouadio points out that “this is a clear limitation to the growth of the middle class. The middle class has no access to credit. Banks do not give loans for housing or cars any more.”