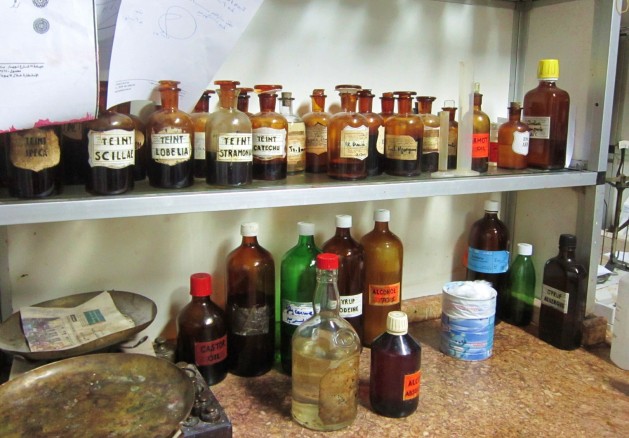 Many pharmacies and herbalists in Egypt prescribe their own 'wasfa' (secret drug or herbal elixir). Credit: Cam McGrath/IPS

CAIRO, Aug 10 2014 (IPS) - Magda Ibrahim first learnt that she had endometrial cancer when she went to a clinic to diagnose recurring bladder pain and an abnormal menstrual discharge. Unable to afford the recommended hospital treatment, the uninsured 53-year-old widow turned to what she hoped would be a quicker and cheaper therapy.

A local Muslim sheikh claimed religious incantations, and a suitable donation to his pocket, could cure the cancer. But when her symptoms persisted, Ibrahim consulted a popular herbalist, whose wasfa (secret drug or herbal elixir) was reputed to shrink tumours.

“I felt much better for a few months and thought the tumour was shrinking,” she says. “But then I got much worse.”

When she returned to hospital the following year, tests revealed that the tumour was still there, and the cancer had spread to her lymph nodes. Moreover, the herbal mixture she was taking had caused her kidneys to fail.

“Our health care system is deeply deformed,” Bakr told IPS. “It’s not just a matter of low funding and corruption, ignorance (pervades every tier of) the health system, from government and doctors to the patients themselves.”

It is estimated that one in every five private medical clinics in Egypt is unlicensed, and thousands of medical practitioners are suspected of using false credentials or having no formal training.

“There are a lot of so-called doctors who practise medicine in Egypt,” says Bakr. “They mostly work out of small clinics, but you’ll even find them in the most prestigious hospitals.”

The incompetency goes all the way to the top.

In February, Egypt’s military announced it had invented a device to remotely detect hepatitis C – along with acquired immunodeficiency syndrome (AIDS), swine flu and a host of other diseases. The device, which is said to work by detecting electromagnetic waves emitted by infected liver cells, is based on a fake bomb detector marketed by a British con artist.

The military also claimed that it had invented a revolutionary blood dialysis machine that can cure hepatitis C, AIDS and even cancer in a single treatment.

“I was shocked when I saw these incredible claims were being made with barely any clinical evidence,” says Dr Mohamed Abdel Hamid, director of the government-run Viral Hepatitis Research Lab (VHRL). “With any new medical treatment you should perform peer-reviewed, double-blind clinical trials before announcing it.”

Reacting to the global swine flu pandemic in 2009, overzealous parliamentarians passed a motion to slaughter all of Egypt’s 300,000 pigs.

There was no evidence that pigs transmitted swine flu to humans, nor had the virus been detected in Egypt. But officials, swayed by the Islamic prohibition on eating pork, appeared to seize the opportunity of a like-named virus to rid the Muslim-majority nation of its swine.

“The pigs were kept almost exclusively by poor Christian zebaleen (rubbish collectors), who used them to digest the organic waste,” says Milad Shoukri, a zebaleen community leader. “Thousands of families lost their livelihoods to this absurd decree, which had no scientific basis.”

“With each health scare we see the same patterns,” says Cairo pharmacist Amgad Sherif. “People panic and throw science out the window. The low level of education and high illiteracy among Egyptians makes them susceptible to believe even the most ridiculous medical claims.”

When a swarm of desert locusts descended on Cairo, enterprising charlatans took out ad space in local newspapers offering a “locust vaccine” to anxious citizens.

Not surprisingly, the injected serum, which turned out to be tap water dyed with orange food colouring, offered no protection against “locust venom”. But it did leave duped households poorer, and at risk of blood contamination or hepatitis C infection from jabs with unsterilised needles.

“The people doing this only care about getting money from people who don’t know any better,” says Sherif. “They know nothing about medicine and do not follow even the most basic hygiene practices.”

“Sometimes they give people injections – who knows what’s in them,” says Sherif.

Egyptian authorities have also found themselves in a cat-and-mouse game with thousands of “sorcerers”, whose superstition-based folk medicine draws desperate working-class patients suffering physical and psychological ailments. The self-proclaimed doctors and faith healers are particularly difficult to catch, say prosecutors, because they tend to work out of rented apartments and advertise mostly by word of mouth.

An Egyptian judicial official told pan-Arab newspaper Al Arabiya that despite attempts to prosecute sorcerers for swindling and fraud, most cases are dropped when the sorcerers reach a settlement with their victims. “There is almost one sorcerer for every citizen,” he concluded.