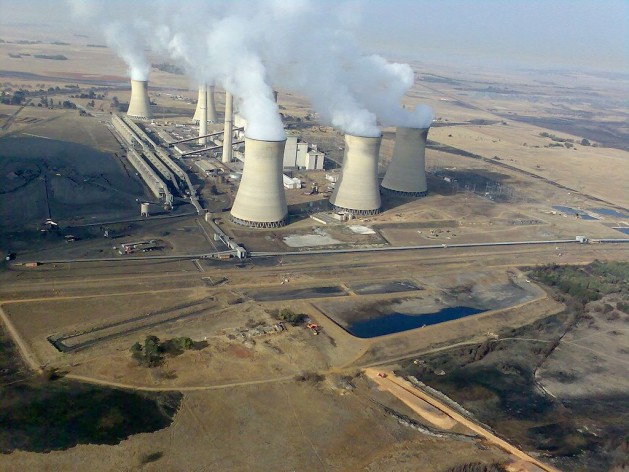 Arnot coal-fired power station in Middelburg, South Africa. Climate activists are pushing for a much greater rollout of renewable energy as the key to shifting the carbon-intensive energy sector towards a sustainable low carbon future. Photo credit: Gerhard Roux/CC BY-SA 4.0-3.0-2.5-2.0-1.0

CAPE TOWN, Jul 28 2015 (IPS) - Anti-nuclear energy activists are up in arms, and have taken to vigils outside South Africa’s parliament in Cape Town to protest against President Jacob Zuma’s push for nuclear development.

The protest has been building since September 2014 when Zuma struck a deal with Russia’s Rossatom to build up to eight nuclear power stations in South Africa. The stations would cost the country around 1 trillion South African rands (84 billion dollars).

As the protests mount, the Southern African Faith Communities’ Environment Institute (SAFCEI), an interdenominational faith-based environment initiative led by Bishop Geoff Davies, has said the government’s nuclear policy is not only foolish but immoral.

“SAFCEI does not believe that nuclear energy is an answer to climate change but is a distraction likely to bankrupt the country [South Africa] and lead to further energy impoverishment” – Liziwe McDaid, energy advisor for the Southern African Faith Communities’ Environment Institute

SAFCEI is demanding that the government take a fresh look at its drive for nuclear energy, and the call has found resonance among clean energy civil society organisations (CSOs) in South Africa.

Although CSOs and government agree in the need to tackle climate change urgently, they differ on core issues as South Africa prepares for the U.N. Climate Conference (COP21) in Paris in December.

“We believe that adaptation needs to be given greater emphasis,” says Liziwe McDaid, SAFCEI’s energy advisor. “Building the capacity of affected and vulnerable communities to respond to climate change must be a priority,” she adds.

For mitigation, argues McDaid, a much greater rollout of renewable energy is the key to shifting the carbon-intensive energy sector towards a sustainable low carbon future.

As a participant in the country’s National Climate Change dialogues, she says that SAFCEI shares the aspiration for responsible climate change and “we are in agreement with government on many of the priorities as outlined in the White Paper.”

However, stresses McDaid, when it comes to nuclear energy, “SAFCEI does not believe that nuclear energy is an answer to climate change but is a distraction likely to bankrupt the country and lead to further energy impoverishment.”

Meanwhile, David Hallowes researcher and editor of Slow Poison for groundWork, another climate change pressure group, feels there is no consensus between the government and the CSOs ahead of the crucial Paris meeting.

South Africa is not doing enough on adaptation, said Hallowes. “Government is still allowing mining and industry to poison water and land in key catchments and agricultural areas,” he told IPS, adding that the result is that climate impacts will be amplified.

The same plants and developments that are driving climate change are poisoning and killing people, animals and plants that are in the path of pollution, “so the people’s struggles for an environment not harmful to their health and wellbeing are also climate struggles.”

According to Hallowes, “there are different views on what can be achieved with renewable energy. We (groundWork) do not think it can power infinite economic growth and hence we do not believe it can sustain a capitalist economy. In the short term, we think we should be looking for a reduction in energy consumption. The question is who gets it for what.”

Referring to South Africa’s Renewable Energy Independent Power Producer Procurement (REIPPP) programme, which some say proves the benefits of privatisation, he also pointed to differences over nationalisation or privatisation.

“We think we should have a programme that creates democratic ownership and control of renewable energy at different levels from community or settlement, to municipality to national. We call it energy sovereignty.  The National Union of Metalworkers of South Africa calls it social ownership. It’s the same thing.”

The groundWork researcher said that CSOs want to see an end to new coal developments, such as new mines or power stations. “I think everyone agrees but don’t necessarily mean the same thing. For some, it’s just a matter of jobs. We think it means the transformation of the economy towards equality and freedom that is democratic control rather than plutocratic control.”

Muna Lakhani, founder and national coordinator of the Institute for Zero Waste in Africa (IZWA), is equally concerned that government is not doing enough to fight climate change.

“Our government sees too much of ‘business as usual’ and is very lax in implementing even the minimal legislation, such as air quality permits, carbon taxes and the like,” he says.

According to Lakhani, CSOs are mostly united on key issues, such as the call for no more fossil fuel, a bigger push for renewables, and promoting local resilience especially of poorer communities and the generally disadvantaged.

Leluma Matooane, director of Earth Systems Science at Department of Science and Technology (DST) says the Department of Environmental Affairs has the responsibility to implement the country’s National Climate Change Response Policy but that the DST has taken a leadership and coordinating role in climate change research and in ensuring that the country’s responses to climate change are informed by robust science.

Under DST’s 10-Year Innovation Plan, argues Matooane, more focus is being placed on improving the scientific understanding of the drivers, impacts and risks of climate change, as well as on technological innovations the country may need to allow vulnerable sectors of the economy and society at large to adapt.

While views may differ on how to deal with climate change, notes the DST official, government has allowed the setting up of a multi-stakeholder grouping in which government has been joined by the private sector and civil society to discuss solutions.

Discussions in this grouping, he adds, influence and shape the country’s position in international debates and there is a deliberate attempt to have South Africa’s representatives deliver the similar position and messages at different platforms.