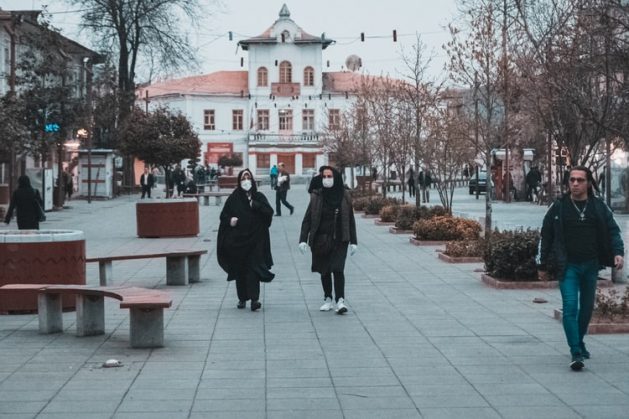 In Iran, which has seen some of the highest COVID-19 infection and death rates in the world, a number of reporters are now facing jail after being detained earlier this month for challenging official statistics about the outbreak of the disease in the country. People in Rasht, Gilan Province, Iran, taking precautions to prevent infection by wearing masks in public. mojtaba mosayebzadeh

BRATISLAVA, Mar 20 2020 (IPS) - Growing intimidation and repression of journalists reporting on the coronavirus is threatening public health in some countries, press freedom monitors have warned.

Repressive regimes desperate to control the narrative around the disease’s spread have stepped up their harassment of journalists challenging official information on cases and their handling of the outbreak, they say.

And by cracking down on those trying to report accurately on the disease, these regimes are jeopardising the dissemination of essential facts the population may need to keep themselves safe, the groups argue.

“When the truth is repressed, everyone’s lives are put in danger, not just journalists,’” Robert Mahoney, deputy executive director of the Committee to Protect Journalists (CPJ), told IPS.

Since the emergence of the disease at the end of last year in China and its subsequent transformation into a global pandemic, there have been growing concerns over the treatment of reporters covering virus outbreaks in some states.

In China, there have been reports of local journalists who criticised the government’s response to the virus being harassed by security forces. Some have even vanished, presumed taken by police and detained in an unknown location.

Meanwhile, last month, three Wall Street Journal reporters were expelled from China over an article about the impact of the virus on the Chinese economy. And just this week 13 journalists working for The Wall Street Journal, New York Times and Washington Post had their credentials revoked by Chinese authorities.

Beijing said this followed United States authorities’ tightening of rules for Chinese media outlets operating in the country, but the editors of the three newspapers all condemned the decision. Dean Baquet, the executive editor of the New York Times, said it was “especially irresponsible at a time when the world needs the free and open flow of credible information about the coronavirus pandemic”.

But it is not just China where journalists are facing problems for not toeing the government line.

In Iran, which has seen some of the highest COVID-19 infection and death rates in the world, a number of reporters are now facing jail after being detained earlier this month for challenging official statistics about the outbreak of the disease in the country.

Fardin Moustafai, the editor of a news channel on the Telegram instant messaging app, was this month formally charged with publishing figures contradicting official information about the epidemic’s progress, according to press freedom watchdog Reporters Without Borders (RSF).

Reza Moisi, head of the Afghanistan-Iran Desk at RSF, told IPS that some journalists who had been brought in for questioning over their reporting will now stand trial and could face jail sentences.

He said though that the regime’s approach to such journalists would “do nothing to help combat the coronavirus epidemic, quite the contrary.”

“The repression of press freedom in Iran is systematic and therefore the control of information there is implacable. This repression targets journalists, of course, but also the public’s right to be informed. Researchers and journalists themselves have said this is one reason why situations, especially in a crisis, worsen.

“In the current crisis, the concealment of information and lack of complete and independent information has clearly put the population in danger,” he said.

The crackdown on journalists in Iran, and in other places such as China, is little surprise, said Mahoney.

“We have seen journalists face repression in places like China and Iran in the past. There are governments which want to control the narrative when something embarrassing, something they appear to be dealing badly with, or has got out of their control, like a pandemic, happens,” he said.

“The apparatus of censorship is already in place, this is just another time that it has been turned on to control the flow of information,” he added.

But concerns over the press’s ability to report accurately on the crisis are not confined solely to countries seen to have repressive regimes.

In the U.S., for instance, there has been criticism about the way the White House has informed about the disease. Critics say there has been a litany of scientifically baseless, false, misleading or confusing statements from President Donald Trump and other officials for months.

U.S. media also reported that Trump tried to have at least one health expert, Dr. Nancy Messonnier, director of the National Centre for Immunisation and Respiratory Diseases, muzzled after she publicly contradicted the President’s statements and that the White House tried to gag health officials who wanted to warn elderly people to avoid air travel.

Officials have also openly attacked media for their reporting on COVID-19. At the end of last month, acting White House chief of staff David Mulvaney said the media was overplaying the dangers of the disease as a way to “bring down the president”.

Mahoney said that in situations where governments effectively bypass the press and speak directly to the people, or do not give them proper access to relevant officials and experts, incorrect or misleading information can end up being passed out to the population unchecked.

“Look at the US where the White House was telling people for weeks that the coronavirus was just like seasonal flu, and then suddenly it’s an emergency,” he said.

“The work journalists do in uncovering things, such as corruption or political scandals, is important but often does not have an immediate impact on normal people’s lives. But their work now has real-time consequences – it could be a matter of life and death. This is why journalists need to have, and be able to disseminate, correct information. If the truth is repressed, the correct information is not getting out,” he explained.

The importance of ensuring accurate information is relayed to not just the public but healthcare workers and scientists has recently been pointed out by health professionals.

Last month, dozens of public health scientists wrote in The Lancet medical journal of their concerns that misinformation about COVID-19 could be hindering efforts to contain the disease.

Previous studies, including on recent Ebola outbreaks on Africa, have shown that misinformation can worsen infectious disease outbreaks.

To this end, governments around the world have taken action to stop the spread of hoaxes and fake news about the disease. Some of this has been drastic, including criminalisation and long jail terms for people found guilty of posting or sharing misinformation about the virus and its spread.

This has led to fears that in some countries these measures are being used to silence critical voices, including journalists.

In China alone, as of February 21, China’s Ministry of Public Security had registered more than 5,500 cases of people “fabricating and deliberately disseminating false and harmful information”.

In Malaysia, for example, dozens of people, including a journalist, have been arrested for allegedly spreading false information about the virus via social media. There have been similar arrests across Asia, including in India, Thailand and Indonesia, in recent weeks.

Moiri told IPS that in Iran, more than 130 people have been arrested since the end of February for publishing false information. “Not all these people are journalists, but many of them are probably citizen journalists who have published something that contradicts official information,” he said.

Journalism experts have cast doubt over the effectiveness and motivations behind such measures.

Lynette Leonard, Associate Professor at the Journalism and Mass Communication Department of the American University in Bulgaria, told IPS: “Censorship is always a concern even with ‘fake news’. There is rarely a clear way of distinguishing the political goals of criminalising information dissemination from public health goals.

“Fake news, the intentional spread of false information to gain influence or power, is a real problem but the term has been manipulated so much that any legislation that is enacted quickly will likely lack the precise definitions needed to be useful in the fight [against it].”

With no end expected to the pandemic anytime soon, it is unclear what further threats journalists in some countries will face for challenging their governments’ handling of the crisis.

But in at least one country they are unlikely to be effective in completely suppressing critical reporting.

During a string of crises over the last year, including floods in March 2019, popular protests last November, the shooting down of a Ukrainian airliner in in February, and now the coronavirus outbreak, the regime has made increasing use of censorship and repression, particularly to control the population, according to Moisi.

“But the question is, will the Islamic Republic of Iran win this war on information? The country’s recent history shows that repression and imprisonment have not kept journalists quiet,” he said.