Stories written by Diana Cariboni
Diana Cariboni has been the co-editor-in-chief of IPS since june 2013. Before that, she was IPS associate editor-in-chief for three years. She has also served as the regional editor of IPS Latin America since March 2003. Working together with the editor in chief, she is responsible for the content of the IPS World Service and overall journalistic production, particularly in Spanish. Since March 2007, she has served as editor of the award-winning Tierramérica, a weekly service about the environment and sustainable development published by more than 20 Latin American newspapers. She led the teams that reported from the Copenhagen and Cancun climate change negotiations in 2009 and 2010. Diana has trained dozens of journalists throughout Latin America and taught journalism in the ORT University school of media and communications, Uruguay. In 2007, she was co-awarded the AVINA scholarship for investigative journalism in sustainable development for the project The Unusual Wealth of the Chocó. She began her career as a journalist in 1992 working for various media outlets in Uruguay, such as El Observador and El País newspapers, and the Sarandí and Setiembre FM radio stations. Cariboni specialises in technology, science and public health. She also worked as a writer on international politics, economy and the environment for Third World Institute publications, a subsidiary of the Third World Network. She is married and the mother of five children. She was born in Argentina in 1962 and has lived in Uruguay since 1984. She joined IPS in 2001. | Twitter | 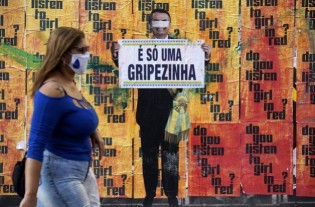 By Diana Cariboni and Isabella Cota
Half a dozen US Christian right groups have poured millions of dollars into Latin America and have promoted misinformation about COVID-19 and other health and rights issues, openDemocracy can reveal today.

By Diana Cariboni
The natural resources of currently buoyant Latin America could be significantly depleted in less than a generation. Combined with the fact that this is the region with the greatest income inequality between the rich and the poor, the outlook might appear disastrous. But the warning, voiced by the World Bank, is not meant as cause for despair.

By Diana Cariboni
It’s not true that developing countries conditioned the inclusion of the green economy in the final document at Rio+20 on clearly defined provisions for financing, the head of the Venezuelan delegation, Claudia Salerno, told TerraViva.

By Diana Cariboni
Despite scientific evidence and continued weather disasters across the globe, climate change continues to be relegated to second tier among national and international priorities.

By Diana Cariboni
"We are the coldest country in the world... so global warming is good for us. The warmer it is, the bigger the harvests... They talk about stopping deforestation of the tropical jungles to fight climate change, but we don't have tropical jungles."

By Diana Cariboni
The short-cuts that the United Nations system is offering companies to profit from strategies against global warming were the target of loud protests on the Day of Action for Climate Justice.

By Diana Cariboni
What some people view as modest but real progress in the climate change talks, now in their second week in this southeastern Mexican resort city, others see as no more than smokescreens or "false solutions."
Next Page »
ADVERTISEMENT ADVERTISEMENT