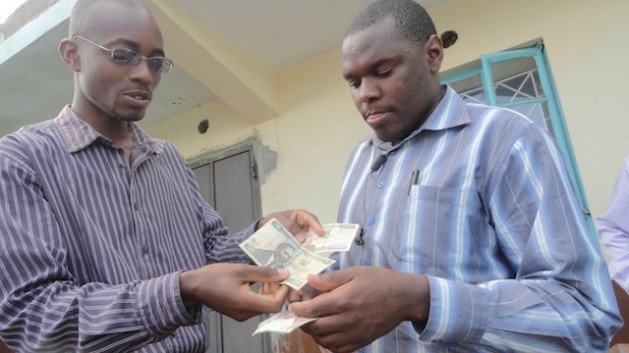 Money changing hands will soon be a thing of the past as East Africa standardises an electronic payment system. Credit Miriam Gathigah/IPS

NAIROBI, Jul 17 2012 (IPS) - For months now East Africans have been expectantly waiting for an economic revolution to begin as they anticipate the launch of a new standardised payment system that will integrate the electronic transfer of money in the region. But continued delays in the launch of the system have economists fearing that the weak financial infrastructure here is hindering its implementation.

The system, a replica of the Single Euro European Payments Area (SEPA), will make all electronic payments in the East African Community (EAC) domestic ones through harmonised laws, policies and regulations within the region.

Although people still make electronic payments across the region, it is often insecure. Currently, cross border transfers in East Africa also take a number of days to be processed.

But when finally launched, the system will be unprecedented in Africa. Not even the Southern African Custom Union, the world’s oldest union, has a common electronic payment system in place. Sources say that it will eventually lead to the creation of one central bank for Kenya, Uganda, Tanzania, Rwanda and Burundi, the countries involved in the formation of the system.

“This system is a step forward towards the establishment of one central bank in the region, as well as one common currency,” Dr. Danson Mwangangi, an economist and market researcher in East Africa, told IPS.

And it is also about integrating trade.

“This is about electronic transfers. A payment method that is increasingly becoming common as the East African Community continues to integrate trade,” explained an economist and policy analyst at the Central Bank of Kenya involved in the process, and who did not wish to be named.

But that future appears a long way off. Though the payment system was supposed to have been launched in April, it has yet to come into effect. And the Central Bank of Kenya, one of the architects of the project, has refused to divulge information about its progress or set a new launch date.

However, Dr. George Ntawagira, a Rwandese economist working in Kenya, told IPS that the delay could be because the region’s cash-based economy is characterised by weak financial infrastructure. At least 60 percent of all payments in EAC are made in cash, a system that is bulky, risky and often inefficient.

Ntawagira added that banking remained risky in the region as a significant number of banks in Kenya lose millions of shillings every year from illegal withdrawals by computer-savvy criminals.

“These kind of risks have to be minimised. Still, East Africans have great expectations for this system and there has been concern over the delay in the inception of it.

“But this is to be expected, the financial infrastructure is still too weak to support this system. One of the greatest challenges is the discrepancies in regulatory and supervisory frameworks.”

He added that close supervision of all the banks in the region would be critical to the success of the system.

“Although it is rare to find supervisors across banks scrutinising each other, this is an important aspect of regional integration because weaknesses in one financial institution can be corrected to prevent it from putting the entire system at risk.”

Ntawagira was quick point out that even the highly successful M-PESA, a mobile phone system where a maximum of 500 dollars can be transferred from mobile phones to pay bills and accounts and even purchase airtime, faced numerous problems when first launched in 2007. This included issues of network connectivity and financial integration.

But, according to the World Bank, it has since become Africa’s success story and facilities payments totalling almost 320 million dollars a month in the region.

And economists still believe that the new electronic payment system will significantly change how money moves across the region’s borders. The system is expected to not only be more secure than the current banking structure, but also cheaper and more efficient.

“Currently, if you move to another country in East Africa, even temporarily, you will have to go through a number of complex procedures in order for you to open a new account in your new country.”

With the new electronic payment system, residents of East Africa will be able to continue using their existing bank accounts from their home countries while residing elsewhere in the region.

It is also hoped that the system will lead to increased investment.

“EAC has continued to struggle in their attempt to lure foreign direct investment (FDI). This has largely been due to poor infrastructure in all sectors, be it roads, financial and so on. This system might improve FDI,” economic analyst, Titus Mwakazi, told IPS by phone from Tanzania.

“An integrated financial market can enhance liberalisation of intra-trade, boost the development of viable projects, strengthen financial institutions, encourage innovation as well as the pooling together of scarce resources in the region,” he said.

Still, despite of the promise that an integrated financial system holds for the struggling EAC economy, it nonetheless still has with a number of challenges. This includes the issue of the uneven level of growth and sophistication in the banking sector in some countries like Rwanda and Burundi.

“Kenya has achieved a much higher level of growth compared to the other countries. A weak banking system in one country may compromise the success of the system by increasing the risk of cross border electronic transfer,” Mwangangi said.