CAPE TOWN, South Africa, Aug 7 2012 (IPS) - The road between Zimbabwe’s Victoria Falls and Livingstone, in Zambia, is a well-traversed one, criss-crossed by bicycle riders towing trailers of bread and other supplies, with their bicycle spokes reinforced to bear the extra weight.

“If you have a bicycle, you can be rich,” said one cargo cyclist on the road just beyond the falls, as he abandoned pedalling and pushed his wheeled load. “This is how we trade.”

Although they are low-tech, the trailers are skilfully designed and often neighbourhood- manufactured, have two wheels and are attached to the bicycle via a hitch behind the saddle. They can carry up to around 200 kilogrammes of goods, water or, less often, people. These are significantly greater weights than what can be transported by head load, handcart or backpack. 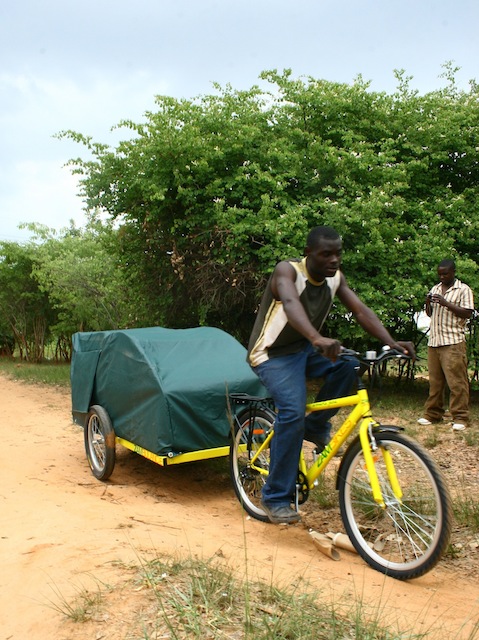 Zambulances – bicycle trailers with a mattress, privacy curtain and basic medical equipment – have replaced walking or being pushed in a wheelbarrow for many ailing rural people who live some distance from healthcare centres. Credit: Gail Jennings/IPS

In Zambia, Namibia and more recently Congo-Brazzaville, bicycle trailers save not only livelihoods, but also lives. Zambulances – bicycle trailers with a mattress, privacy curtain and basic medical equipment – have replaced walking or being pushed in a wheelbarrow for many ailing or pregnant rural people who live some distance from healthcare centres.

Designed and produced by Zambikes, the 2012 winner of the international MobiPrize for mobility-related social entrepreneurship, these trailers have been found to save one life for every nine days they are used.

South Africa has been slower than its neighbours to embrace the bicycle as an obvious example of low-cost, low-carbon mobility. But slowly micro-entrepreneurs and bicycle tourists are discovering the ease and economic opportunity a bicycle trailer can offer as a way of transporting goods and passengers.

Malibongwe* lives in Khayelitsha, a low-income neighbourhood on the outskirts of Cape Town, South Africa. He makes a living buying ice cream and selling it from his make-shift bicycle trailer – and manages to support his whole family. Recently he tested positive for HIV and now uses his bicycle to make the monthly trip to collect his anti-retroviral medication as well.

So it was with dismay that Malibongwe learned that his enterprise is in danger, from a surprising source. Despite the country’s draft non-motorised transport (NMT) policy that aims to increase the role of NMT as a key transport mode and allocate adequate and sustainable funding for its development and promotion, the South African National Department of Transport (NDoT) is considering prohibiting the use of bicycle trailers on public roads.

However, the department recognises that although there is growth in motorised transport in developing countries such as South Africa, a large portion of the population depends on non-motorised forms of transport. This is likely to not only continue, but increase following global trends of rising fuel prices and the need for low-carbon transportation.

“Local transport solutions such as trailers, handcarts or bicycles could assist poor and rural communities in making them more efficient with small business and domestic duties,” stated the draft NMT Policy.

It also noted that the “effects of inefficient transport systems in rural parts of Africa, which rely on non-motorised transport in its most basic form, are manifested in a lack of market integration, poor provision of education and health services, low productivity and low rates of regional and local economic activity.”

Yet in June, the NDoT published an intention to amend the National Road Traffic Regulations, proposing that “no person shall ride a pedal cycle on a public road drawing or towing a trailer or anything.”

Malibongwe told IPS that he is “very worried about the new law, as if it is passed I’ll have no way of supporting my family.” He is one of a number of bicycle riders who petitioned the NDoT in July, asking that the proposal be reconsidered.

Kyle Mason-Jones, a chemical engineer whose work focuses on carbon emissions reduction, and who also bicycle commutes 15 kilometres most days in Cape Town, is another.

“By limiting the ability of bicycles to carry goods and passengers, this regulation will undermine their potential as a primary mode of transport for individuals and for most entrepreneurial small businesses,” he told IPS.

“For the poor, this will destroy a very promising possibility for affordable transport and wipe out many small business opportunities. For wealthier citizens, it will make the ownership of a motorcar a necessity of life, eliminating many of the benefits of bicycle-centred transport.”

Concerns about road safety were among the reasons behind the proposed amendments, said one of the policy-makers working with the NDoT. “We know that we have a poor safety record – almost half of the deaths on our roads are pedestrians and cyclists,” he told IPS, asking for anonymity.

South Africa has one of the highest road death tolls in the world. During the holiday period from Dec. 1, 2011 to Jan. 10, 2012, 1,475 people were killed in road accidents according to the NDoT. This contrasts sharply with the United Kingdom, for example, where the death toll for all of 2010 was 1,857.

“Road safety activists brought to our attention that in mostly rural areas, people were being carried by these trailers, and we had a concern about the speed of downhill transportation,” the source said.

Safety-conscious countries such as Germany and the UK – where bicycle trailers are popular modes for parents transporting young children, and for long-distance bicycle tourists – strictly regulate bicycle trailers as merely one facet of comprehensive attention to safer road behaviour.

In Germany, bicycle trailer loads (goods and people) may not exceed 250 kg, or 100 kg in a rigid coupling with no independent brakes, and 60 kg if the trailer itself has no brakes and has a flexible coupling.

Trailers must be less than 80 centimetres wide. In the UK, all wheeled vehicles designed for transport must comply with British or European safety standards – the equivalent of the rules and regulations issued by South Africa’s Bureau of Standards. Certain visibility precautions must be taken, such as reflectors, lights and pennants.

In South Africa, current legislation forbids bicycles from towing other vehicles, but does not define bicycle trailers as vehicles. Instead, trailers were broadly defined as a vehicle towed by a car. The country’s Vehicle Technical Committee, in reviewing these regulations in 2011 and 2012, determined to prohibit bicycle trailers rather than regulate or define them.

The new, prohibitive measures seem counter-productive in a middle-income country with high levels of poverty, where the overwhelming majority of people rely on non-motorised transport.

Improving the goods and passenger carrying of non-motorised transport vehicles will not only facilitate the fulfilment of any government’s transportation goals, but also its goals for job creation, micro-enterprise and community sustainability, suggested NMT engineer and safe cycling educator Louis de Waal.

There is no doubt that road danger is a major fear for people who walk and cycle in South Africa, De Waal told IPS. In addition to the ill-disciplined behaviour of road users, the road environment itself is often not conducive to keeping pedestrians and cyclists safe.

“But to ban one form of bicycle transport, ahead of implementing other safety regulations such as mandatory 1.5 metre passing distances, slower road speeds and compulsory bicycle reflectors, just does not make enough sense,” he said.

Citizen action and the resulting correspondence to the NDoT might have made an impact, though.

“Now that we have seen people’s objections, and read their reasoning, we agree that we will have a significant impact on entrepreneurs and small businesses, and livelihoods of people, with this possible regulation. So we will be back at the drawing board,” said the source at the NDoT.

This is good news, of course, said Malibongwe. But he raised a new concern. Unaccustomed to reading South Africa’s government gazette, blogs or social media, he was not on the “public engagement” radar; he found out about the proposed amendments only because a vigilant activist was looking for interviewees. How will he know of the outcome, he asked?