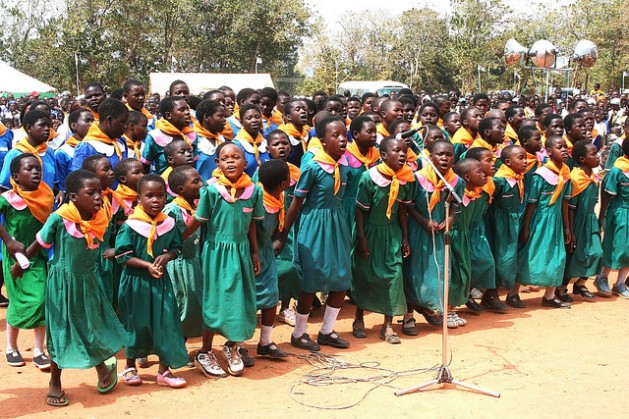 "Sweet 16" marriages are a cause of controversy in Malawi. Credit: Claire Ngozo/IPS

UNITED NATIONS, Oct 11 2012 (IPS) - The United Nations has launched a global campaign to abolish an anachronistic social practice still prevalent in some communities around the world: child marriages.

“International conventions declare that child marriage is a violation of human rights because it denies girls the right to decide when and with whom to marry,” says a new report released Thursday by the U.N.Population Fund (UNFPA).

The launch also marked the first International Day of the Girl Child – Oct. 11 – as designated by the 193-member General Assembly last year in order “to recognize girls’ rights and highlight the unique challenges girls face around the world”.

If present trends continue, this will rise to an average of 15.1 million girls a year, starting in 2021 until 2030, according to the study titled “Marrying too Young: End Child Marriage”.

UNFPA Executive Director Dr. Babatunde Osotimehin, who is highly critical of the practice, says he is determined to help abolish child marriages worldwide.

“No social, cultural or religious rationale for child marriage can possibly justify the damage these marriages do to young girls and their potential,” he said. “A girl should have the right to choose whom she marries and when. Since many parents and communities also want the very best for their daughters, we must work together to end child marriage”.

“It is the only course by which we can avert what otherwise is the human tragedy of child marriage,” he said.

Dr. Osotimehin also said that child marriage is an appalling violation of human rights and robs girls of their education, health and long-term prospects.

Like Apartheid, Gender Discrimination Has to End, Says Tutu

Speaking at a press conference to mark the first International Day of the Girl Child, Nobel Laureate Archbishop Desmond Tutu pointed out that women and girls have been "dogged" by gender discrimination for centuries.

Until recently, he said, most royal couples wanted their first child to be a boy. And the birth of a princess was a sad event in the royal household.

But all that is changing, said Tutu, chair of the Elders and a founder of Girls Not Brides: the Global Partnership to End Child Marriages.

He described child marriages as "vicious and cruel".

Despite all the injustices done to more than 50 percent of the world's population, Tutu pointed out that Ireland had its first woman president (Mary Robinson, a former U.N. high commissioner for human rights, who was present at the briefing) and the first woman chancellor in Germany (Angela Merkel).

For the first time, he said, the church will ordain two women bishops.

"We have ended apartheid and we can end this discrimination against women," said Tutu, one of the leading fighters against apartheid in his home country South Africa.

Salamatou Aghali Issoufa, a young activist from Niger, said when she was 14, she was to be married to a 50-year-old man who was already married with children.

She was saved from being a child bride primarily because of the intervention of her elder brother who convinced their parents not to go ahead with the marriage.

"I wanted to stay in school and become a midwife. And I was lucky and fortunate. But the girls in my village who got married young stopped going to school and some even died giving birth," she said .

She thanked the U.N. Population Fund (UNFPA) for funding her education. She is now a qualified midwife, and married with a child.

U.N. Secretary-General Ban Ki-moon said that education for girls is one of the best strategies for protecting girls against child marriage.

"When they are able to stay in school and avoid being married early, girls can build a foundation for a better life for themselves and their families".

“Marriage for girls can lead to complications of pregnancy and childbirth – the main causes of death among 15-19-year-old girls in developing countries,” he added.

Dr. Osotimehin also expressed concern over the 14-year-old Pakistani school girl who was shot Wednesday for being an education rights campaigner in her home country.
The campaign to abolish child marriages has strong support from several U.N. agencies, including UN Women, the U.N. children’s agency UNICEF, and international human rights organisations such as Girls Not Brides: The Global Partnership to End Child Marriage and Human Rights Watch.

“The report should be a wake-up call to all of us that we need to take strong action to end child marriage,” she said.

She said no girl should be robbed of her childhood, her education and health, and her aspirations.

“Yet today more than 14 million girls are denied their rights each year when they are married as child brides. UN Women calls on all governments and all people to stop child marriage and protect the rights of girls,” said Bachelet.

Anju Malhotra, of the Gender and Rights Section at UNICEF, said the International Day of the Girl Child readily reflects the need to put girls’ rights at the centre of development.

“The U.N. and partners are coming together to show the incredible progress made and to highlight the ongoing challenges,” she said.

In a statement released Thursday, UNICEF said in India, one of the countries in the world with the largest number of girls being married before their 18th birthday, child marriage has declined nationally and in nearly all states from 54 percent in 1992-1993 to 43 percent in 2007-2008, but the pace of change is slow.

The testimonies of the children interviewed illustrate the profoundly detrimental impact of child marriage on their physical and mental well-being, education, and children’s ability to live free of violence.

The consequences of child marriage do not end when child brides reach adulthood, but often follow them throughout their lives as they struggle with the health effects of getting pregnant too young and too often, their lack of education and economic independence, domestic violence, and marital rape.

Asked it was fair – or unfair – to say that most child marriages take place in Muslim countries, Liesl Gerntholtz, director of the women’s right’s division at Human Rights Watch, told IPS, “It is very unfair to say this, as child marriage happens in many different communities, including Christian ones.”

To give a few examples, she said, in Burkino Faso, 48 percent of girls now between the ages of 20 and 24 were married before they reached 18; in Cameroon, the figure is 36 percent; in the Central African Republic it is 61 percent; and in the Democratic Republic of Congo is 39 percent.

“These are UNICEF figures, so they are as reliable as it is possible for them to be,” she said.

Meanwhile, the UNFPA announced it will invest an additional 20 million dollars over the next five years to reach “the most marginalized adolescent girls in 12 countries with high rates of child marriage”. The countries include Guatemala, India, Niger and Zambia.

“This investment will allow UNFPA to deliver more systematic and integrated programmes at scale to support married and unmarried girls aged 10-18 years that are at risk of dropping out of school, child marriage, and adolescent pregnancy,” said Dr. Osotimehin, UNFPA’s executive director.