IPS correspondent Sabine Clappaert interviews MARLEEN TEMMERMAN, head of the Department of Reproductive Health and Research at the World Health Organisation (WHO)

BRUSSELS, Jan 20 2013 (IPS) - Despite staggering advances in medical science and technology over the years, women around the world continue to suffer gravely as a result of inadequate access to basic reproductive health services. 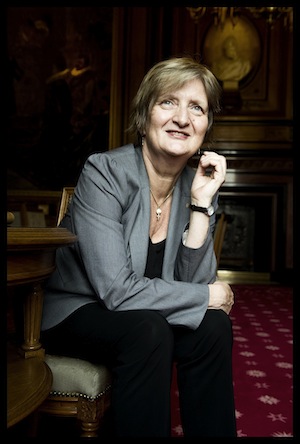 Roughly 134 million women are “missing” worldwide as a result of sex-selective abortions and neglect of newborn girls. Complications in childbirth are responsible for the deaths of over 350,000 women annually, 99 percent of them from developing countries.

Against this backdrop, the appointment this past October of fifty-nine-year-old Marleen Temmerman – known as ‘Mama Daktari’ in Kenya, where she worked as a gynaecologist for many years – as head of the Department of Reproductive Health and Research at the World Health Organisation (WHO), is a promising move in the right direction.

IPS correspondent Sabine Clappaert spoke to Temmerman, an illustrious Belgian physician, about her plans to weave the reproductive health agenda tightly into the WHO’s mission.

Q: Why did you decide to leave your career as head of the Obstetrics and Gynaecology Department and member of the board of directors at the Ghent University Hospital to join the WHO?

A: Throughout my career, my goal has always been to improve the reproductive and sexual health and rights of women and girls across the world. While I wasn’t actively looking for a new job I realised that this opportunity at the WHO presented a very powerful lever to help me achieve these goals.

Q: What budget are you working with and what are your goals?

A: I have a working budget of approximately 40 million dollars, which is less that what it has been in previous years. The (global financial) crisis is clearly also impacting the budgets allocated to sexual and reproductive health. At the time of my appointment, for example, I was promised a significant contribution by the Belgian government. Sadly, it never materialised.

I do fear that the difficult economic climate will mean that sexual and reproductive health are seen as less of a priority, yet nothing is further from the truth. If we want the next generations of women to be healthy and empowered, we need to give them access to facilities and programmes that keep them alive and well during pregnancy and childbirth or give them access to family planning services so they can plan their own future.

Family planning is key not only to women and children’s health, but also to slowing unsustainable population growth and sustaining the economy and ecology.

In my new role, I will be looking at why this problem persists and how we can reduce it from various perspectives: by looking at contraceptive solutions in the R&D (research and development) pipeline, through implementation research that aims to identify possible barriers – cultural and religious beliefs or the availability and cost of family planning, as well as what educational initiatives need to be taken to correct misconceptions at the community and individual level.

Adolescent sexual and reproductive health is also enormously important if you consider the fact that abortions and complications during childbirth remain the number one cause of death among 15 to 19 year-old girls.

Q: In 1994 you founded the International Centre for Reproductive Health (ICRH), which today is active in many countries across the world including Kenya, Mozambique, China and Guatemala. What lessons did you learn that you take with you into your new role at the WHO?

A: One of the most important lessons I’ve learnt is that collaboration is key to the success of projects in the sexual and reproductive health realm. At the moment we’re working on a project in Kenya that aims to support girls and women who are victims of sexual violence. We’re training medical staff to make sure they follow correct procedures and do all the right medical checks. We also ensure that girls are given psychological support and that they have access to legal advice.

There is still so much to be done to end female genital mutilation (FGM), to lower mortality rates during childbirth or to make sure that every girl and woman has access to sexual and reproductive health facilities. There is a saying that says ‘If you want to go fast, go alone; if you want to go far, go together’. I think we must go fast and far. And we can only do this together.”

Q: What is the developed world’s role in assuring reproductive health and justice in the global South?

“I think the developed world has a fundamental responsibility toward developing countries. The traditional North-South view is clearly out-dated, but on the other hand, women’s rights and gender equality are much more advanced in the developed than in developing world. It is our responsibility to support women in the South, to ensure that programmes of sexual and reproductive health don’t “disappear” into global health initiatives, that we continue to commit sufficient resources and budgets to advancing women’s access to sexual and reproductive health facilities.

Q: What has been the hardest lesson for you while undertaking your work in Africa?

I am also always shocked by the ease with which our societies brush over topics such as sexual violence, as if it is normal. So often I am told “but it is part of our culture”. This has to change. The way we bring up boys and girls, and the gender roles we instil in our children, must change.