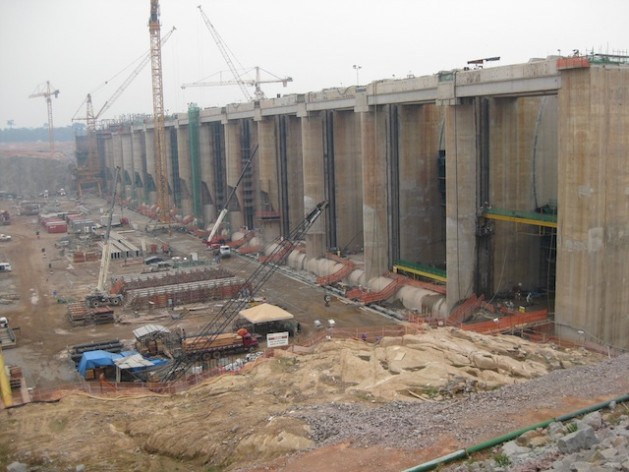 Construction of the Santo Antônio hydroelectric dam in the Amazon region, one of the mega power projects that feed Brazil's power hungry industries. Credit: Mario Osava/IPS

RIO DE JANEIRO , Feb 13 2013 (IPS) - Brazilian President Dilma Rousseff, whose political career was fuelled by her stellar performance in the energy sector, is now faced with an ironic challenge: how to bring down the unusually high price of electricity predominantly generated by hydropower – the cheapest source – in this South American country of 196.6 million people.

Conditions today are unfavourable. The cost of power generation shot up due to the lack of rain throughout 2012, which meant the country had to resort in the last quarter of the year to the oil power plants that operate as backup for the hydroelectric stations during times of drought.

“The government wants to repeal the law of supply and demand by decree, with the absurd strategy of reducing utility rates and stimulating consumption in the middle of a power shortage,” economist Adriano Pires, head of the Brazilian Infrastructure Centre, told IPS.

Rates will have to go up again soon when the thermoelectric power plants “start collecting their bills” for operating overtime, as the scarce rainfall that is expected over the remaining summer months fails to fill the reservoirs, Pires added.

According to Pires, the high cost of energy in Brazil is caused by a failure to stimulate supply and competition in the sector, and by “monopolistic practices” and high taxes.

Roberto D’Araujo, director of the Ilumina Institute for the Strategic Development of the Energy Sector, also criticised the government’s strategy, although for different reasons. He told IPS that the government “is dismantling Brazil’s power system by using public companies” to meet the demands of industry in the southern state of São Paulo.

D’Araujo estimates that complying with the government’s measures will cost Furnas, a state-owned power company where he headed the Department of Energy Studies, 60 percent of its revenue. And he added that it would not be one of the hardest-hit companies.

The power companies run by the state operate either nationwide, like Furnas, or at a regional level. They all have a minority interest owned by private shareholders, and most are traded on the stock exchange.

The reduction in electricity bills will be made possible through subsidies and state companies that operate old hydroelectric plants under concessions whose terms will expire between 2015 and 2017. The government offered to extend these contracts in exchange for compensation and rate cuts of more than 90 percent in some cases.

Some of these companies, located in states governed by opposition parties, rejected the measure. But since they are controlled by the central government they had no choice but to comply and watch their stock prices plummet along with their investment capacity.

The situation in Furnas, which supplies 10 percent of Brazil’s electricity, is getting more complex. The company has 1,700 employees due to retire this year, and it will also have to let many other people go in order to absorb the rate reduction.

This will unfortunately deprive the company of “intelligence and experienced staff” said D’Araujo, who is a defender of energy as a public service within the context of the “natural monopoly” held by the hydroelectric power sector in Brazil.

According to D’Araujo, electricity prices “have doubled since 1995”, with the sector’s first privatisations and the implementation of the “market model”.

The government was unmoved by social protests and it was not until the industrial sector started demanding cheaper energy to regain competitiveness and overcome what analysts refer to as the country’s “de-industrialisation” that it lowered prices.

Before the January rate cut, industries complained that one megawatt/hour cost them 165 dollars on average, while the mean cost of energy for its top 27 trading partners is 108 dollars.

While residential rates vary enormously, in a middle-class neighbourhood of Rio de Janeiro, for example, one kilowatt/hour cost some 24 cents in December.

“Lowering the cost of energy is a good thing, but not if it’s done with subsidies that transfer resources from taxpayers to consumers in a blood transfusion that doesn’t get the patient out of the ICU,” Pires said.

He was alluding to the risk of blackouts and the use of power prices to contain an inflation rate that has exceeded the annual target of 4.5 percent for years now.

The government does the same with fuel, keeping consumer prices at artificially low levels since 2005 through Petrobras, the state-owned oil consortium, which sells fuel products on the domestic market at a lower price than what it pays to import them. This subsidy costs an estimated two billion dollars a month, analysts say.

On Jan. 30, the price of gasoline went up 6.6 percent and diesel 5.4 percent. The hike was authorised by the government because the impact on inflation will be neutralised by the reduction in electricity rates. But it will not offset the losses suffered by Petrobras, whose net profit dropped 36 percent last year, in comparison to 2011.

This is another snag in Rousseff’s otherwise excellent performance in the field of energy, which was instrumental in her political rise to the presidency in January 2011.

She had an outstanding run as energy secretary for Rio Grande do Sul, a state that was spared the crisis that forced the country into energy rationing from June 2001 to February 2002.

That position was the springboard for her appointment as mining and energy minister in 2003 and as chief of staff in 2005. This last post in turn paved the way for her nomination to succeed Luiz Inácio Lula da Silva (2003-2011) in the presidency.

As energy minister she led an electric system reform in 2004 to improve safety and planning.

The memory of the 2001 power shortage sparks fears of a new crisis, but the situation today is not the same, as new investments have been made throughout the system, said Emilio La Rovere, an engineering professor at the Federal University of Rio de Janeiro.

A number of thermoelectric plants were built to cover energy demand when low reservoir levels reduce hydroelectric power generation capacity, La Rovere noted. But he said there were no absolute guarantees as “zero risk is very costly”.

He added that while government planning has been adequate, there have been glitches in implementation caused by delays in the construction of several projects. He mentioned, for example, wind power plants that are not operative because transmission lines have not been installed.

The controversy over electricity prices is “a dispute among capitalists”, said Gilberto Cervinski, one of the leaders of the Movement of People Affected by Dams.

Cervinski told IPS that it was a battle between power companies, whose profits shot up in the wake of privatisation, and industries, which are now benefiting from the reduction in rates.

The movement – which estimates that more than a million people have been affected by the construction of hydropower dams over the last 30 years – supports the government’s rate cuts. But it is calling for even lower prices for Brazilian families, which it says could be achieved by trimming the profits of distributors and not just generators, as is currently done.

Cervinski also said it was unfair to favour industry with a 30 percent reduction, as it already benefited from cheaper electricity prices, while households were only granted an 18 percent cut.

In addition, he said he was worried that the high rate cuts would affect the financial health of the state power companies, and argued that rates should be double the less than five dollars per kilowatt/hour set by the government.