Gordon Brown, U.N. Special Envoy for Global Education and former Prime Minister of Britain, writes that our failure to reach the marginalised is a result of universal development goals that do not explicitly target resources on the most vulnerable populations. Without corrective remedies, unequal outcomes in one generation conspire with unequal access to resources in the next to make a mockery of genuine equality of opportunity. 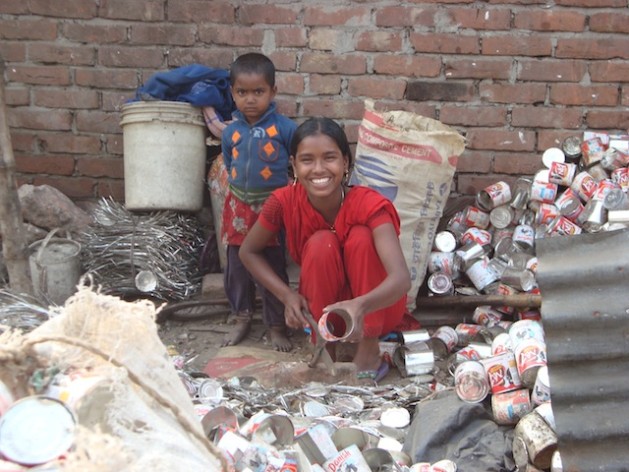 WASHINGTON, Apr 20 2013 (IPS) - “Recall the face of the poorest and weakest man you have seen, and ask yourself if this step you contemplate is going to be any use to him.”

Gandhi’s challenge from 1948 should be uppermost in our thoughts this week at the Washington summit led by U.N. Secretary-General Ban Ki-moon and World Bank President Jim Yong Kim, when we examine why progress to meet the Millennium Development Goals (MDGs) has stalled.

Gandhi’s challenge is this: who will speak up for the most marginalised – the out-of-school child, the child slave, the trafficked boy, the girl bride, the street child? Who will speak up for the most vulnerable and the hardest to reach? These are the forgotten millions that the MDGs were to do most to help. And yet the most revealing conclusion of our decade-long anti-poverty crusade is that despite great, and in some cases, outstanding progress, we have done least for those most in need.

This week in Washington, in the presence of Ban Ki-moon and Jim Yong Kim, we are discovering that unless we target resources on the most vulnerable, they will continue to miss out. While the MDG process has made huge strides for universal education, it has been best at plucking the “low hanging fruit” – with some of the most marginalised left high and dry. So there are still 15 million children working full-time when they should be at school, and ten million school-aged girls who get married every year, unlikely to return to education.

For these reasons, but also because of shortages of teachers and classrooms – and often sheer discrimination against girls – a total of 500 million girls growing up today will never complete their schooling.

Unfortunately our failure is no accident: universal goals, which do not explicitly target resources on the most vulnerable, mean that those who are already the most marginalised will continue to go without. Indeed, as we formulate a new set of post-2015 anti-poverty targets, we have to recognise that future MDGs will also fall short on delivery if they do not ensure more resources go to those in need.

Adam Wagstaff of the World Bank concludes from his studies on health as well as on education that: “It’s not actually true that progress at the population level will automatically entail faster progress among the poor. If inequalities in education and health outcomes across the income distribution matter, and if we want to see ‘prosperity’ in its broadest sense shared, it looks like we really do need an explicit goal that captures inequality.”

Our failure to reach those most in need is not just ethically indefensible for anyone who believes in equal opportunities. It is self-evidently bad for the MDGs: we can’t accelerate progress unless we get serious about reaching the poor.

So a new focus on the marginalised is central to new plans put by Ethiopia, Bangladesh, Nigeria, Yemen, the Democratic Republic of the Congo and others to the Washington summit this week. Nigeria is considering extending a World Bank pilot offering conditional cash transfers to girls in northern states who represent the largest group in the country’s ten million out-of-school population.

Ethiopia – which has seen one of the most rapid expansions of education enrolment anywhere in the world – is also now targeting the out-of-school girls in hard to reach rural areas who have so far not benefitted from the country’s progress. The DRC wishes to abolish school fees, which currently deter two million pupils from going to school.

Bangladesh wants to go further. It has also decided more resources are needed for the children of the flood zones and hill areas and the victims of child labour and child marriage – but it is also making an equity goal explicit in order to reach the most marginalised. It has committed to closing the gap in attendance rates between the richest and poorest income groups and to closing the learning gap between the best and poorest performing areas. Bangladesh faces a huge uphill fight to deliver on its new policy of increasing public spending on schools. It simply does not have the money for educational investment – either domestically or from the international community – to fund its new direction.

So while the public justification for all our efforts is to help the poorest, the frailest, the neediest and most vulnerable, we are coming to realise that our focus on universal goals must be matched by extra resources for the most marginalised. Indeed, when the next set of post-2015 MDGs includes more ambitious universal targets for learning outputs and secondary education, we must do more to prevent the most disadvantaged being left further behind. Put simply – as we start to raise the ceiling, we must not forget to finish putting in place the floor.

As Pauline Rose of the UNESCO Global Monitoring Report has concluded: “Unless we have a goal that tracks progress for the poorest and richest…on education access and learning, gaps are likely to remain when we reach the next deadline for goals.”

So one of the lessons to learn from more than ten years of experience in trying to meet the MDGs is that, without corrective remedies, unequal outcomes in one generation conspire with unequal access to resources in the next to make a mockery of genuine equality of opportunity. Here we rely on and are influenced by the original thinking of Indian economist Amartya Sen, who argues that “equivalent freedom” for people who come to the table with unequal advantages requires more resources to turn the right to equal treatment into real opportunity.

Fortunately there is already a growing consensus that without this focus on inequality we cannot meet our ambitions on behalf of the poor. In education we need what Kevin Watkins of the Overseas Development Institute calls “stepping stone” targets for reducing inequalities, with timelines for 2020 and 2025 on the way to our universal goals in 2030. Further commitments are required to reduce the gap in school attendance and completion rates between poorest and wealthiest and between best and worst performing areas.

What makes me convinced that we could gain support for these measures? It is that these forgotten millions that the MDGs were to do most to help are prepared to be silent no more.

Poor rural girls now know that they do not have the freedom to choose to go to school – and that the 2015 goal of schooling for all will not be worth the paper it is written on without a commitment to greater equity. Child labourers know that they have been left behind – and that their human right to education is not being delivered by their governments or the international agencies responsible.

I am struck by the energy, creativity and determination I see in these new civil rights movements, led by Malala Yousafzai. Children are providing leadership lessons from which we can learn.