The Other Side of the Coin in Spain 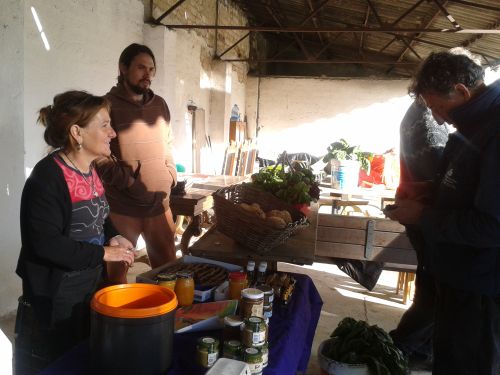 MÁLAGA, Spain, Apr 8 2013 (IPS) - Wholemeal rye bread, lettuce and chard are some of the products on offer from the El Caminito urban vegetable garden at the small organic produce market in this southern Spanish city, with prices set in “comunes”, one of more than 30 social currencies circulating in the country.

“The aim is to find an alternative to the curse of unbridled capitalism and to sow the foundations of a more just and compassionate society,” activist David Chapman of the Málaga Común platform, the network responsible for the market, told IPS.

In the network, more than 700 registered users exchange goods and services using “comunes” as currency and recording transactions on the internet.

In Spain, over 30 local currencies coexist with the euro, and they are “tools empowering communities by means of the exchange of products and services and the creation of parallel markets,” economist and writer Julio Gisbert told IPS.

The común, the lazo and the coín in Málaga, the puma in Seville, the zoquito in Jerez de la Frontera (Cádiz), the pita in Almería and the justa in Granada – all in the south of Spain – are some of the social currencies created with the shared mission of dynamising local economies and moving toward a more sustainable economic and production model all over the country.

The Puma Social Currency Network was launched a year ago in the Old City of Seville as a people-to-people mutual credit system. It seeks to “relaunch and localise the economy of this part of the city, and create community,” local resident Natalia Calzadilla, one of its members and a producer of vegetable jams, told IPS.

Puma users keep a hard copy of their transactions in goods and services on cards. They also upload their offers and requests on the Community Exchange System (CES), a platform created in 2002 in Cape Town, South Africa, which can be used in 56 countries for transactions in social currencies or time exchange.

Madrid has the boniato; in the northern city of Bilbao, the local currrency is the bilbodiru; and in the northeastern town of Girona, the euro-RES.

The euro-RES was created in Belgium over 15 years ago, with the same value as the euro. It is used by a network of some 5,000 small and medium businesses, as well as by individuals, as explained on its web page.

Users of these alternative currencies come from all walks of life: “They are masseuses, doctors, electricians, lawyers, professors… and the quality of what is on offer is amazing,” said Chapman.

The Puma Network, which brings together students, the unemployed, professionals and tradespeople, promotes creativity, the development of new skills, moral support and self-esteem for its members, said Calzadilla.

She paid another member 25 pumas (equivalent to 25 euros) for a massage. Now that person is credited with that amount to buy another service or goods in the community. The project organises a monthly market, called Mercapuma, where producers display their wares, and on Mondays a food store sells organic and homemade foods.

Carmela San Segundo offers English, French and Esperanto classes to members of Málaga Común, and told IPS she paid for painting two rooms in her house and repairing her computer in comunes.

Spain’s economic and financial crisis is encouraging experiments in social exchange, which may use alternative currencies, barter or time banking, “because people are seeking different ways of life,” said Gisbert, the author of “Vivir sin empleo” (Living Without a Job) and the blog of the same name.

According to Gisbert, there are more than 300 time banks in Spain, so called because they do not bank money but hours. When a person performs a service, he or she is credited with the appropriate number of hours in return.

Although complementary currencies are criticised for not solving the problem of poverty, Gisbert argues that their goal “is not to feed people in need, but to seek mutual help to achieve self-sufficiency and a new and more sustainable social model.”

The coín, a currency created in the town of Coín in the province of Málaga, is part of the global transition movement and is intended to serve as an instrument of reaction to and change from “the energy, economic and environmental crisis,” according to its web site.

Most of these social currencies, launched by organisations or networks, have no official basis, Gisbert said. However, that does not mean this small-scale phenomenon is illegal.

Alternative currencies are not a new invention, but a global phenomenon that has emerged especially in industrialised countries. There are complementary currencies in the United States, Canada, Germany, Austria, Switzerland, the Netherlands and other countries. For instance, in the multicultural London borough of Brixton, transactions can be made in Brixton Pounds.

The Brixton Pound, which is issued in different bills annually, is one of the most innovative social currencies, Gisbert said.

Meanwhile, groups associated with alternative currencies are becoming interested in providing microcredit. José Luis Gámez, the son of the founder of the axarco, which circulates in Axarquía in Málaga province, would like to be able to finance social economy projects in the region with this currency that was created in 1988.

But the silver and copper axarco coins are no longer used because of the cost of minting them. Today, they are collectors’ items.

As well as promoting the exchange of goods and services, alternative currencies can be used to put a value on the work of volunteers or those who create learning, according to the philosophy of an international project, tgl (teaching, giving, learning).

As it makes headway in Spain, tgl is using the social currency L, which is created when people teach or learn skills or knowledge, participate in voluntary projects or carry out social enterprises that generate employment and local wealth.

“L is not a currency to facilitate barter or exchange, but to generate wealth because it injects liquidity into the system. It is created by teaching and learning, volunteer work and social enterprise,” Raúl Contreras, co-founder of the social change platform Nittúa and promoter of the Okonomía popular economics school, where students and tutors are paid in this alternative currency, told IPS.