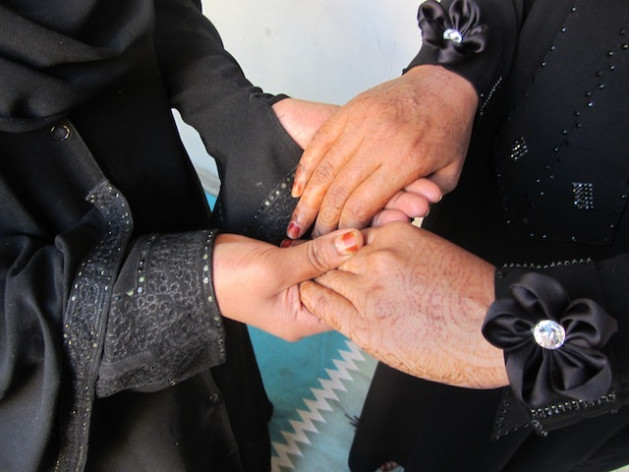 KUALA LUMPUR, May 31 2013 (IPS) - Liberian journalist Mae Azango says she spent a year living “like a bat, going from tree to tree” with her daughter in order to escape religious fanatics who were threatening to kill her for exposing the practice of female genital mutilation in her home country last year.

A senior reporter at the local FrontPage Africa publication, Azango told IPS that although the Liberian government signed a treaty in 2012 promising its citizens the right to information, it continues to hold back data on sexual and reproductive health and rights from journalists.

“With every story that I write, I take a great risk,” she says, adding that she is entirely dependent on “secret sources” within the government to gather information, since very little is shared in the public domain.

Her woes found echo among hundreds of women and health experts gathered in the Malaysian capital of Kuala Lumpur for the third annual Women Deliver global forum that ended Thursday.

Hailing from different corners of the globe, participants at the conference had no trouble identifying common goals: breaking taboos surrounding sex education and creating a safe climate for advocates, health professionals and educators to spread awareness on safe sex and family planning.

In Morocco, a country of 32 million people, schools are banned from offering sex education to young people because parliamentarians believe it to be an “evil concept, designed to promote promiscuity,” sexual and reproductive advocate Amina Lemrini told IPS.

She says progress on improving sexual health services in her country has been particularly slow due to taboos introduced by religious leaders.

With a government unwilling to challenge clerics, the job of providing crucial health services falls entirely on the shoulders of civil society, who are then threatened for their efforts.

Lemrini says she does not know a single reproductive rights activist who has not been threatened, yet the government offers them no protection.

Their distress has been recognised by leading experts in the field, including the executive director of the United Nations Population Fund (UNFPA), Babatunde Osotimehin, who told IPS that religious fundamentalism is a “indeed a worry” when it comes to progress on sexual health.

Still, he urged activists to continue their work, adding, “Fundamentalism exists in all societies and all religions – what matters is how we communicate our message.”

He believes that if more people are made aware of their rights and choices, they will not hesitate to defy archaic laws and so-called “cultural taboos.”

“The average person on the street does not want a situation where death comes calling every day for reasons that can be prevented,” he stressed.

Indeed, even a cursory glance at global statistics is enough to make a strong case for the need for better communication: according to the UNFPA, nearly 800 women die every single day as a result of pregnancy-related complications; in a year, that number is closer to 350,000 deaths, of which 99 percent occur in developing countries.

Doing a wide sweep of global data, the UNFPA estimates that “millions of girls” practice unsafe sex and lack information on contraceptives. Osotimehin recently wrote that an “unmet need for family planning exists among 33 percent of girls between 15 and 19 years old…in Ethiopia, 38 percent in Bolivia, 42 percent in Nepal, 52 percent in Haiti and 62 percent in Ghana.”

Nyaradzayi Gumbonzvanda, head of the Young Women’s Christian Association (YWCA), told IPS that giving up on communication about sexual and reproductive health and rights was not an option.

“We need an operative environment for those who are discussing this issue,” she said. “We need to protect the media — this isn’t a choice. Governments must scale up the level of cooperation with the media and provide supportive legal backup where it is not yet available.”

Gumbonzvanda thinks that citizen journalism could be an effective way to mitigate the risk posed by fundamentalists, not only by amplifying the voices of those who often go unheard, but also by empowering common citizens to take action.

Nowhere was the power of citizen journalism more evident than during the revolution in Egypt in 2011, where blogs, tweets, and Facebook posts replaced TV channels, newspapers and radio stations in reaching millions of people.

Today, as Egyptians struggle against the conservative policies of the ruling Muslim Brotherhood, that network of citizen journalists has turned its attention to reproductive health and safe sex, topics that are frowned upon by Islamists.

As a result, the number of bloggers increases every day, as citizens and advocates flee to cyberspace in search of safe forums to share information and ideas.

“When I blog about the sexual rights of women I break two rules,” Awadalla said. “First, by speaking about a forbidden issue and secondly by speaking as a man, who is not supposed to take the side of women.” Though he faces harsh repercussions, nothing will persuade him to give up his advocacy.

But even while citizens innovate new ideas to get around the deadly threats of engaging in sex education, experts say governments must not be let off the hook for failing to provide these basic services.

Governments in Asia, Africa and Latin America must be held accountable by foreign funders, says Agnes Callamard, executive director of the London-based ‘Article 19’, an organisation dedicated to freedom of expression.

“Every government has committed to spending a certain amount of the funding they receive (on sexual health),” she said, so tracking aid flows could pressure governments to improve their track records on information sharing.

In fact, when the Mexico-based Grupo de Información en Reproducción Elegida (GIRE) started to track aid supposed to be allocated to providing information on sexual and reproductive health in 2011, “we found that nearly a million dollars were missing,” said GIRE Information Rights Advocate Alma Luz Beltrán y Puga. “We sued the government over that.  If the same tracking is done the world over, it can lead to greater accountability.”

According to a study done by the World Health Organisation (WHO), developed countries donated nearly 6.4 billion dollars to help provide access and information on reproductive health in developing countries. It is now up to civil society to ensure that money is responsibly allocated.