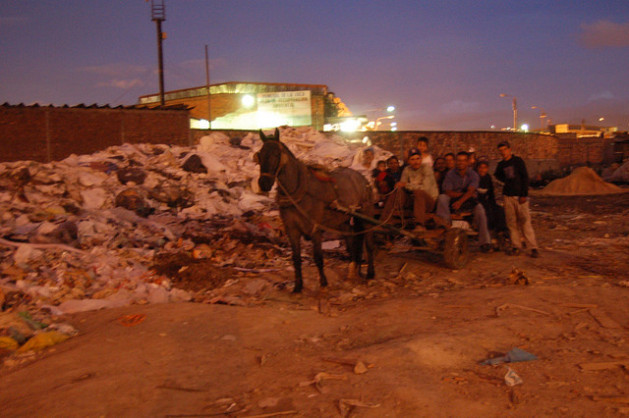 May 2 2013 (IPS) - Nora Padilla, one of the six winners of this year’s Goldman environmental prize, dedicates her days to organising informal recyclers in the Colombian capital, where the city’s eight million inhabitants are just now reluctantly starting to classify their garbage at source.

Waste pickers in Colombia have finally gained recognition from the state after a 10-year legal battle.

Bogotá’s informal recyclers are now formally recognised as providers of a public service, and since March 2013 the city government pays them 44 dollars per ton of recyclable solid waste that they collect and transport to scrap dealers.

This income is in addition to what they earn selling partially processed, clean recyclable material to the scrap dealers, who pay them per kilo.

No healthcare or schooling

The census commissioned by the Bogotá city government found that 23.3 percent of the recyclers interviewed had no health coverage and 45.3 percent lived in precarious conditions, even under bridges, where they were often evicted by the police.

Last year, 75.7 percent of the recyclers earned less than the legal minimum wage, which at the time was 270 dollars a month.

Until the city government issued the decree that waste pickers were to be paid for the service that they offer as part of the trash management system, only large private garbage collection consortiums received payment for transporting solid waste, in an industry that collects 7,700 tons of rubbish a day.

“We are very happy because this achievement by Bogotá’s recyclers is to be applied nationwide,” Padilla told IPS by phone from San Francisco, California, where she travelled to receive the Goldman Prize, often referred to as the “Green Nobel”, on Apr. 15.

“This victory – because it is a victory that after so many years of struggle the work of recyclers has been recognised and valued, that social justice has been done, through these payments – is an achievement that the rest of the world is noticing,” she added.

Padilla heads the Bogotá Recyclers Association (ARB), a pioneer organisation that emerged in 1987 and now groups some 5,000 waste pickers – one-third of the city’s informal recyclers.

“Recyclers on every continent, in every country we know about, are saying: ‘yes, it’s possible, we also want that’,” said Padilla, referring to the recognition of Bogotá’s informal recyclers as a valued part of the waste management system.

“This is not only a triumph for Bogotá’s recyclers; it is an achievement for recyclers around the world,” she said. “We thank the city, because it has begun to recognise us and to say: recyclers have rights.”

Padilla calls herself a “grassroots recycler, which means I offer an essential public service.” She estimates that with their manual labour, garbage pickers like herself collect 100 times as much recyclable waste material as is collected by formal industry in Bogotá.

The private garbage companies truck the waste they pick up to a giant landfill to the south of the city, known as Doña Juana, where they are paid by weight, which means classification of the waste is not a priority for them.

The landfill, created in 1988, is at the limit of its capacity. In recent years, there have been frequent complaints about the dumping of liquid waste from Doña Juana into the Tunjuelo river, a tributary of the Bogotá river, which in turn runs into the Magdalena river that crosses the country from south to north.

In the United States, the amount of energy wasted by not recycling aluminium and tin-plated steel cans, paper, printed materials, glass and plastic is equivalent to the annual output of 15 medium-sized power plants, according to the Global Alliance for Incinerator Alternatives (GAIA).

In Colombia, such estimates don’t exist.

“I started working as a recycler as a young girl. By the time I was seven or eight, I was already going to the dumps, or to El Cartucho,” a slum in the heart of Bogotá, Padilla said.

She proudly explained that the first decision reached by the association was to guarantee that the members’ children would not have to go out with their parents to sort through waste. Towards that end, the ARB members pay the salaries of several women members who take care of the children while the adults go out to work.

Bogotá’s waste pickers sell the material they collect to scrap dealers at 1,361 centres.

But the census did not count unorganised recyclers, including homeless people.

On Mar. 21, a historic event occurred in Colombia, which was cited by the Goldman prize: 790 recyclers received, for the first time, payments for transporting 5,700 tons of recyclable waste to the scrap dealers over the space of two months. A few days later, another 700 people received payments.

The new system was designed in response to a 2011 Constitutional Court ruling that ordered actions to be taken to foment the social integration of Bogotá’s marginalised scrap pickers.