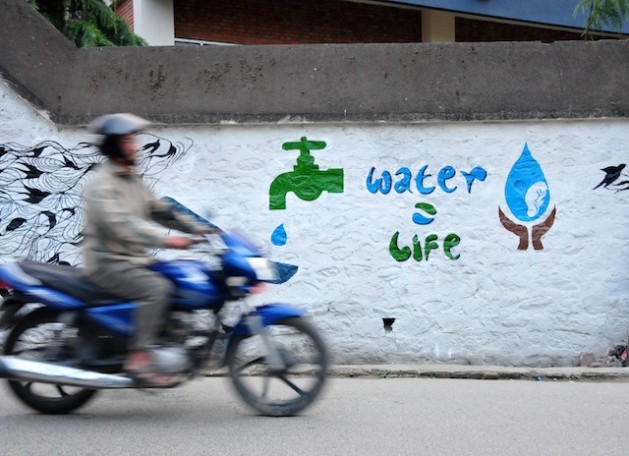 COLOMBO, Jun 19 2013 (IPS) - The Monetary Board of Sri Lanka’s Central Bank, tasked with keeping the island’s economy on an even keel, does not only keep tabs on exchange rates, gold prices and inflation – it also has an eye on a less obvious indicator of economic stability: water levels in the country’s main reservoirs.

Central Bank Governor Ajith Nivard Cabraal last week told a group of journalists in the capital, Colombo, that the Board pays as close attention to water as it does to oil prices.

"An extreme wet monsoon that currently has a chance of occurring only once in 100 years is projected to occur every 10 years by the end of the century." -- World Bank
The reason is simple – Sri Lanka’s power generation is hugely dependent on rainfall. Last year, when a severe drought hit between the months of January and November, water levels in the country’s nine reservoirs used for power generation fell badly.

By August, hydroelectricity made up only 17 percent of the grid, whereas in a normal year the country expects to secure about 40 percent of its annual electricity needs through hydro, or even 50 percent in good years.

The drought forced the country to spend a colossal two billion dollars on imports of furnace oil for thermal generation, according to Finance Secretary Punchi Banda Jayasundera.

Cabraal told IPS that the government is “concerned” about these changing weather patterns and “will take steps well ahead of time, before they become an issue.”

Some say these promises offer too little, too late.

Erratic weather patterns are wreaking havoc across the country. In the last fortnight alone over 50 fishermen were killed at sea due to heavy winds, yet the Central Bank does not have an official or a desk that routinely keeps tabs on the weather and its impact on poverty levels, industrial output or even cargo handling at the island’s ports, which was badly disrupted during the recent storms.

But new research from leading international bodies suggests that countries like Sri Lanka will not be able to take a lax approach to climate change any longer, as extreme weather events are set to become the deciding factor in economic growth.

The World Bank today released its report entitled ‘Turn Down The Heat: Why a 4°C Warmer World Must be Avoided’, detailing how global warming could affect sub-Saharan Africa and South and Southeast Asia.

The report paid particular attention to “the likely impacts of present day two-degree and four-degree-Celsius warming on agricultural production, water resources, and coastal vulnerability for affected populations” in South Asia.

In Bangladesh, land areas at risk of floods could increase by close to 30 percent if temperatures rise by two degrees. Two major industrial and financial hubs in South Asia, Mumbai and Kolkata, are meanwhile both threatened by sea-level rise.

In India, where over 60 percent of crops are rain-dependent, erratic monsoons and rising temperatures are likely to impact harvests and crop yields.

“With a temperature increase of two to 2.5 degrees Celsius compared to pre-industrial levels, by the 2050s reduced water availability for agricultural production may result in more than 63 million people no longer being able to meet their caloric demand by production in the river basins (of the Indus, Ganges, and Brahmaputra),” according to the report.

The Bank also warned that if pledges made at the climate summits in Copenhagen and Cancun are not met, there is a greater-than-40-percent chance of “warming exceeding four degrees Celsius by 2100, and a 10-percent possibility of this occurring already by the 2070s, assuming emissions follow the…business-as-usual…pathway.”

In South Asia, whose population of 1.6 billion is expected to rise to 2.2 billion by 2050, the biggest issue is water scarcity or excess in the extreme.

The report predicted that even if action is taken and warming is reduced, the effects of a hotter climate would still be pronounced in the region, adding, “Many of the climate change impacts in the region, which appear quite severe with relatively modest warming of 1.5-2°C, pose a significant challenge to development.”

Major industrial and financial hubs like Colombo, Mumbai and India’s capital, New Delhi, are vulnerable to flash floods. Floods in May 2010 were estimated to have caused over 50 million dollars worth of economic damages in Colombo, while just last week New Delhi’s main airport was flooded due to the fast moving monsoon.

In countries like Bangladesh, which is struggling to move off a list of the world’s Least Developed Countries (LDCs), extreme weather events can set back a year’s worth of development in the course of a single day. On Nov. 15, 2007, Cyclone Sidr tore through Bangladesh, destroying 800,000 tonnes of rice, accounting for two percent of total annual production in 2007. The storm left in its wake a bill of 1.7 billion dollars, amounting to 2.6 of that year’s gross domestic product (GDP).

The South Asian monsoon, once as predictable as clockwork, now comes in fits and starts, either evading desperate farmers for months at a time or emptying in buckets on unsuspecting and vulnerable populations. Pakistan felt the weight of these changes in 2010 when torrential rain turned into rushing floods that claimed nearly 2,000 lives and affected 20 million people.

On Jun. 17, officials at the Indian Meteorological Department said that the monsoon arrived in New Delhi almost two weeks before predicted dates. The last instance of the monsoon moving so quickly over India and reaching the capital so fast was recorded in 1961.

Last year, Cyclone Nilam swept the Southern Indian coast, consuming half a million hectares of agricultural land and leaving over 1,300 small tanks and 7,000 km of roadways in dire need of repairs.

“An extreme wet monsoon that currently has a chance of occurring only once in 100 years is projected to occur every 10 years by the end of the century,” according to the World Bank report.

De Silva said that countries should also be worried about lack of water and the impact on agriculture. “It is expected that the southernmost tip of India and Sri Lanka will be affected, with 20 to 30-percent of summer months experiencing unprecedented heat with disastrous consequences on agriculture, livelihood and health,” she said.

The World Bank expert told IPS that attention paid to the issue is marginal compared to the damages caused, adding, “A change in thinking is urgently needed.”

She believes that all development and poverty reduction programmes, as well as urban planning, should have an in-built mechanism that factors in the impact of a changing climate, rather than waiting for disaster to strike before taking action.

Poor urban planning is now forcing the Sri Lankan government to spend 233 million dollars on a flood protection scheme in the capital. This economic burden will only increase until governments start taking seriously the reality of a much hotter world.