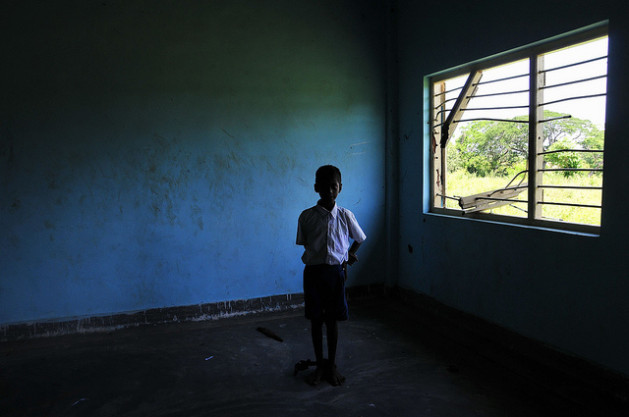 COLOMBO, Oct 9 2013 (IPS) - Stricter laws could curb the rising trend of child abuse in Sri Lanka, experts say. However, recommendations like witness protection, special courts and procedures to hear abuse cases and more legal assistance to victims are unlikely to be included in a new draft Child Protection Policy that is to be presented to parliament before the end of the year.

Although detailed data are not available, estimates suggest between three and five incidents of grave child abuse are reported daily in this island nation of 20 million.

“Certainly there is more reporting of cases that is taking place now,” he told IPS.

And in the first six months of this year, according to police statistics, 805 cases of child rape were reported.

But delays in legal proceedings, lack of witness protection and lack of assistance to victims are discouraging families and victims from reporting cases or seeking help, says a recent study by the U.N. Children’s Fund (UNICEF).

“This study indicates, as does literature over the last two decades, that the procedures for investigation and prosecution of child abuse, witness protection, and support for the victim are grossly inadequate,” the report says.

Of the more than 1,450 cases reported in 2011, not a single conviction was reported by end of 2011, and a backlog of 8,000 cases dates back six years. Officials at the UNICEF country office said the justice system remains overwhelmed with backlogged cases and is in need of a complete overhaul.

“The entire system needs to be assessed and rebuilt, through all the stages, with efficiency as a key priority,” UNICEF said in an emailed statement to IPS.

Harini Amarasuriya, a lecturer at the Open University of Sri Lanka and co-author of the report, said the Sri Lankan legal system was focused on prosecution and lacked support services like assistance to the victim and witness protection.

She also recommended that the country reform its laws to introduce special procedures to deal with cases of child abuse.

“Unfortunately, there is no indication that these issues are being given priority,” she said.

While officials at the Ministry of Justice and the National Child Protection Authority confirmed that a new national child protection policy was currently being drafted, provisions for witness protection and special procedures to deal with child rape cases were not among the new recommendations, they told IPS.

UNICEF officials, however, said that efforts were underway to clear the backlog of outstanding cases. The U.N. agency, along with various government offices, launched a programme last year to train police officers and officials at the attorney general’s department to efficiently handle child abuse cases.

The police department has also opened special district-level bureaus with trained personnel dedicated to handle child abuse and rape cases. In 2012, two special courts were also established, including one in Colombo and another in northern Jaffna, to hear child abuse cases.

Amarasuriya said that while increased awareness-raising had resulted in more cases being reported to police, more work was needed to bring about behavioural changes.

UNICEF said: There is a need for much more awareness and discussion on the issue,” adding that “behaviour change reduces incidents of abuse”.

UNICEF reported that abuse incidence was high in rural areas, like the North Central Anuradhapura District and the Central Rathnapura District. Officials also said that while the number of cases reported to the police had increased, there was still a significant amount of underreporting.

Research has also shown that child abuse is a contributory factor to rape, sexual abuse and violence against women.

“Men’s experience of emotional abuse and neglect as children was associated with non-partner rape perpetration in two countries, China and Sri Lanka,” says a recent study by the U.N. Development Programme titled Why Do Some Men Use Violence Against Women and How Can We Prevent It?

At least half of these men had been abused in their childhood, the survey found.

“Child abuse was a common phenomenon across the region, with 50 percent of Sri Lanka-national men reporting experiences of childhood emotional abuse and neglect (i.e. being publicly humiliated or insulted, parents being too drunk or drugged to care for child, etc),” the report that interviewed 13,000 participants across six countries in Asia and Pacific found.