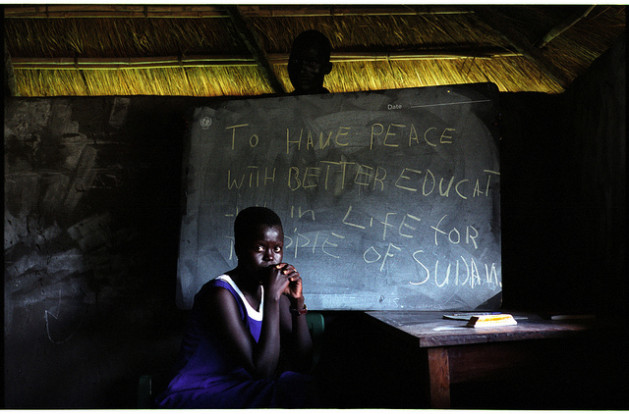 As a result of decades of civil war, many adults and children in South Sudan did not go to school. Government statistics for 2011 show that only 39 percent of primary school students and 30 percent of secondary students are female. Credit: John Robinson/IPS

Mary pleaded with her father to keep her in school. But her father was adamant. “He said it is a waste of money to educate a girl and that girls are born so that people can eat,” Mary told me in 2012, when I visited South Sudan to interview girls and women about child and forced marriages. “He said marriage, not education, will bring me respect in the community.”

Recently, I attended the African regional conference of the International Conference on Population and Development (ICPD) Beyond 2014 in Addis Ababa, Ethiopia. The meeting was held to review progress, gaps and challenges to carrying out the 20-year action plan for human rights development from the landmark ICPD conference in 1994. At that original conference, 179 governments made a commitment to deliver human rights-based development.

It was encouraging to hear delegates from South Sudan’s government talk about the importance of promoting girls’ access to education in the post-2015 development agenda, and their government’s commitment to ensuring that all girls in South Sudan go to school. Indeed President Salva Kiir has reiterated this message time and again.

To its credit, the government of South Sudan has identified education as a priority in its development plan. It has taken various policy and programmatic steps since it gained autonomy from Sudan in 2005 and independence in 2011 to increase school enrolment, including advancing the rights of girls to education. The 2008 Child Act and Transitional Constitution provide for the right to free and compulsory primary education. The Child Act also explicitly states that no girl can be expelled from school due to pregnancy and that young mothers must be allowed to continue their education.

South Sudan has an Alternative Education System that offers people who have not had access to formal education, including pregnant girls and mothers, the opportunity to go to school. In 2011, close to 70,000 girls and women went to school under this programme.

Despite these efforts, providing quality education in South Sudan is not an easy task. Government statistics for 2011 show that only 39 percent of primary school students and 30 percent of secondary students are female. The new country faces substantial development and humanitarian challenges, and education is no exception. As a result of decades of civil war, many adults and children in South Sudan did not go to school. Internal insecurity and conflict continue to disrupt education. School infrastructure is underdeveloped, and the country has few trained teachers.

For girls like Mary, these challenges are often compounded by child marriage. According to government statistics, close to half – 48 percent – of South Sudanese girls ages 15 to 19 are married, with some marrying as young as 12. Many girls in South Sudan do not attend school at all or don’t complete their education as they are married off by their families for a number of reasons – including receiving cows, money and other gifts.

Many of the girls and women I interviewed told me their dreams of continuing school to become accountants, teachers, or doctors were cut short when they married. Despite the government’s initiatives, most of those who had been in school left after three to five years of primary education — when they were hardly literate. Those who dropped out told me they found it difficult to continue after marriage because of financial constraints, domestic chores, childbear­ing and social norms that view marriage and schooling as conflicting.

As South Sudan celebrates the second International Day of the Girl Child –  whose theme is “innovating for girls’ education” – with the rest of the world tomorrow, it should recognise that strengthening girls’ access to education requires positive steps to curb child marriage. This should include enforcing the existing laws on child marriage, and developing and carrying out comprehensive programmes that address the root causes of child marriage. South Sudan needs a national action plan on child marriage to ensure a coordinated and effective response.

When I interviewed Mary in 2012 she was 24 years old, had three children and was struggling to meet their basic needs. Neither she nor her husband had any source of income. Her eldest son who was seven and her five-year-old daughter had not started school because, Mary said, she did not have money to get them to school.

I asked Mary what she thought about her father’s comments that marriage, not education, was important for her. She told me: “Now I have grown up and I know that this is not true. I cannot get work to support my children and I see girls who have some education can get jobs. Education is important for women.”

If South Sudan is to realise its vision of education for all, as well as economic development, it should listen to Mary’s words.