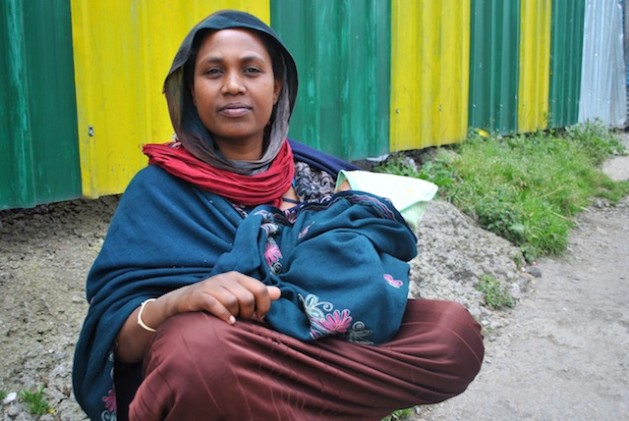 Bosena, 25, sits on the side of a busy road in Addis Ababa, Ethiopia’s capital, with a baby in her arms. She migrated to the city from the countryside and like many on the continent is affected by issues of urbanisation, child rearing, poverty and education. Credit: Jacey Fortin/IPS

ADDIS ABABA , Oct 4 2013 (IPS) - Not far from the headquarters of the United Nations Economic Commission for Africa (UNECA) in Ethiopia’s capital city of Addis Ababa, a young woman named Bosena, 25, sits on the side of a busy road with a baby in her arms.

She has two children, and all of her income – about 30 birr a day, or 1.58 dollars – comes from begging. She migrated to the city from the countryside, and wants to secure a good education for her children. “But if I don’t get enough money, then I can’t send them to school,” she told IPS.

Just around the corner, the very issues that affect Bosena – urbanisation, child rearing, poverty and education – were being discussed at UNECA, where the “Regional Conference on Population and Development Beyond 2014” took place from Sept. 30 to Oct. 4.

The meeting – which is the last in a series of regional conferences held around the world – is meant to assess developmental progress since 1994, when the first International Conference on Population and Development in Cairo set out a programme of action to adjust to demographic changes around the world.

In the two decades since 1994, quite a lot has changed. Africa’s population is seeing incredible growth – about 21 million people every single year since 1994 – and is about to hit 1.2 billion. A U.N. report last month projected that it could more than triple by the end of this century.

That could put a monumental strain on governments across the continent, which are already struggling to address rampant poverty and underdevelopment. But the news isn’t all bad; Africa boasts some of the world’s fastest-growing economies.

The International Monetary Fund predicted this year that economic growth in sub-Saharan Africa should hit 6.1 percent by 2014, far exceeding the expected global average of four percent. Urban centres are transforming into hubs of enterprise, so it’s no surprise that Africa’s population boom is increasingly centred around cities. The continent has the world’s fastest rate of urbanisation; in 1950, only 14.4 percent of people lived in cities; by 2011, the figure was 39.6 percent.

If economic development can keep up, Africa’s population growth could become a boon rather than a challenge. More than 70 percent of the continent’s population is under the age of 30, and these young people could spur incredible productivity in the years to come.

“Population can be an asset,” Abdo Yazbeck, the lead health economist for the World Bank’s Africa Region, told IPS.

“Economies are growing to allow the absorption of this bulge, which generates more income and more taxes and decreases poverty. As the population bulge graduates and starts working, countries need a functioning banking system, so workers save money. This means there is more money for investments.”

But turning population growth into an asset won’t be easy. The boom has myriad causes and effects, and addressing it is a multifaceted effort.

“Ultimately, a human rights approach is the only thing that works, which is why we’re not talking about population control,” Anne-Birgitte Albrectsen, the deputy executive director of the U.N. Population Fund (UNFPA), told IPS. UNFPA is the secretariat for the global implementation of the Cairo programme of action.

“What we’re saying is that the high fertility rates will really challenge countries’ abilities to create sustainable development.”

Women’s rights are a keystone of this week’s conference. UNFPA has devoted most of its efforts over the past two decades to issues like family planning, sex education, maternal mortality and early marriage.

There is still plenty to address; the U.N. estimates that 29 percent of adolescent girls in sub-Saharan Africa are married, and 2.2 million adolescents get pregnant accidentally each year. The World Health Organisation reports that more than six million women annually resort to unsafe – and sometimes fatal – abortions.

But the UNFPA and its partners, which include national governments, the World Bank and private donors, can boast significant progress since 1994.

One programme to combat female genital mutilation inspired 10,000 communities in West and East Africa to reject the procedure. Maternal death rates are down by 41 percent.

A number of facilities have been set up across the continent to offer safe haven for victims of domestic violence.

Men haven’t been excluded from these initiatives; outreach and education initiatives have inspired male community leaders to spread the world about how women’s empowerment can benefit entire families.

Analysts agree that these behavioural changes are more important than simply keeping a lid on population growth.

“It does not make sense to look at population figures in isolation and draw conclusions with regards to potential implications,” Julia Schünemann, a senior researcher at the Institute for Security Studies, an African policy research organisation, told IPS.

“On the positive side, population growth in Africa is likely to mean higher demographic dividend which tends to push GDP higher because there are more economically active people.

“How well that translates into better and more equitable human development outcomes obviously depends on many structural factors and policy interventions.”

Those policy interventions cannot be forced; they must begin on a grassroots level – something UNFPA has been working toward since 1994. Today, communities and governments across the continent are growing increasingly devoted to addressing even the most controversial issues, and that bodes well for the next two decades.

“What we’re seeing in Africa is an increased political will amongst governments to really do something about this. People are showing much more willingness to talk about taboo issues like gender-based violence, female genital mutilation and sexual identity.

“What we’re also seeing at this conference is that policy makers want to go beyond the existing agenda,” said Albrectsen.