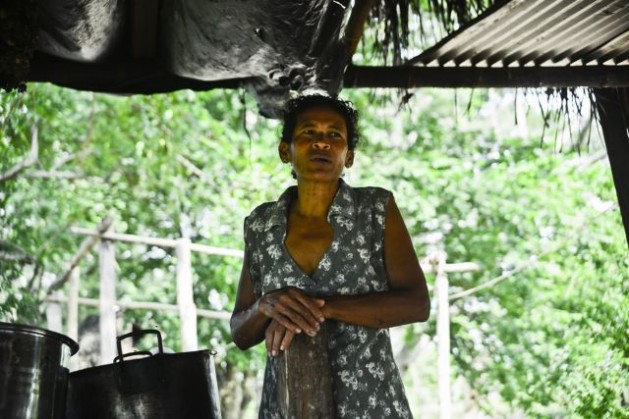 LAS PAVAS/BOGOTÁ , Nov 14 2013 (IPS) - The rural community of Las Pavas in northern Colombia received this year’s National Peace Prize Wednesday in recognition of its peaceful struggle for land that is claimed by an oil palm company, in a case that became an international symbol of the conflict over land in this country.

The day before, the members of the community, organised in the Asociación Campesina de Buenos Aires (Asocab – Peasant Association of Buenos Aires), were formally recognised as victims of forced displacement in a ceremony held in the offices of the government’s Unit for Integral Assistance and Reparations for Victims in Bogotá.

Inclusion on the official Registry of Victims strengthens Asocab in its legal battle against the company with which it is disputing ownership of the land – Aportes San Isidro SA.

As of Oct. 1 the registry included the names of 5,087,092 victims of forced displacement, out of a total of 5,845,002 victims of crimes committed since 1985 in Colombia’s nearly half-century civil war.

Adjacent to the 1,338-hectare Las Pavas hacienda, Buenos Aires is a small village in the municipality of El Peñón in the northern province of Bolívar, some 270 km southeast of the provincial capital Cartagena de Indias.

The village, which has a single street, is on Papayal island located between the river of that name and the Magdalena river, which crosses Colombia from south to north.

People in this area live in villages like Buenos Aires and depend on fishing, farming and raising farm animals for a living.

Through the Unit for Integral Assistance and Reparations for Victims, the state has rectified its previous position, and now officially recognises that the community was forcibly displaced at least twice from Las Pavas, where they worked the land.

“This is an admission of judicial incomprehension because it wasn’t understood that this community was displaced from its source of livelihood, not its place of residence” in Buenos Aires, said Juan Felipe García with the Javeriana Pontifical University’s legal clinic on land, which is providing legal assistance to Asocab.

“Today we’re going to celebrate because the truth has triumphed,” he told IPS.

The campesinos want to change the name of Las Pavas, “which reminds us of difficult times,” says Misael Payares. It will now be called Milagro de Dios (Miracle of God).

The decision benefits 464 people belonging to the 124 families grouped together in Asocab. However, it does not imply recognition of ownership of the Las Pavas land.

The dispute over ownership of the hacienda is a separate legal case, which is before the Council of State and could drag on for 10 more years, the director of the legal clinic, Roberto Vidal, told IPS.

“What lies ahead now is working with the community to decide what measures they want to prioritise; reaching all of the institutional agreements necessary; coordinating with the various institutions; and obtaining the reparations they are demanding,” the director of the Victims Unit, Paula Gaviria, told IPS.

“We have to wait for the authorities to comply,” said Asocab leader Misael Payares, “so that we can see our dream come true, which is to stay in Las Pavas.”

The hacienda has been at the centre of the wider dispute over land in Magdalena Medio, a stunningly beautiful region that used to be coveted by the drug barons because of its location, which is strategic in the logistics of the trafficking of cocaine by air.

On a nearby farm, Rancho Lindo, planes landed and took off until 1983. “Were they shipping firewood, manioc, yams, or what?” Payares quipped.

Since that year, Jesús Emilio Escobar Fernández, a cousin of and front man for notorious drug lord Pablo Escobar (1949-1993), has figured on paper as the owner of Las Pavas.

Up to 1963 the land was unused publicly owned rural property.

The hacienda was abandoned after 1992, as a result of the crackdown on Escobar’s Medellín drug cartel. An enormous tree growing out of a swimming pool is testament to the fact that the property was abandoned.

The people of Buenos Aires, who have large families and are often illiterate, decided then to plant crops on part of the land of Las Pavas, and set up the Association of Peasant Women of Buenos Aires.

Later they learned that, according to article 52 of a 1994 law, the owners of privately-owned rural land lost their property rights if the land was used for drug trafficking or if it had been abandoned for at least three years.

So they occupied Las Pavas, and Asocab was born in 1997, to cultivate cacao, plantain and oak.

The left-wing guerrillas (which emerged in Colombia in 1964) used to simply pass by Buenos Aires, on their way to a nearby hill covered with coca crops, which drew many temporary harvest workers.

Sometimes they would demand payment of a tax, in the form of a chicken or a pig, from the campesinos working Las Pavas, and once they shot and killed a man who they accused of being an army informant.

When the far-right paramilitaries (which began to be formed in 1981) arrived in the area along the Papayal river in 1998 and set up camp a 20-minute walk from Buenos Aires, the guerrillas pulled out.

The paramilitaries “started to kill people,” one of the founders of the women peasant association, Carmen Moreno – whose brother is ‘disappeared’ – told IPS.

Bodies missing the head or legs would float down the river past Buenos Aires. “Even the kids would see them. And they would come shouting ‘Mommy! Mommy! There’s a leg floating by….It’s a woman, mommy, because the toenails are painted!”

But all through those years, hunger would push the villagers, confined to Buenos Aires, to brave their fear and panic over and over again and return to Las Pavas to plant and harvest their crops.

In 2006 they began the legal proceedings to get the state to revoke the existing land title, under the 1994 law. They even applied for and were granted farming loans from state institutions.

But in 2007 it turned out that the front man Escobar Fernández had sold Las Pavas to the companies Aportes San Isidro and CI Tequendama – the latter of which belongs to the Daabon group.

These firms say that no authority informed them that the private ownership status of the land was in question – which made it legally impossible to buy or sell the land.

The government decided that 66,000 hectares of oil palm should be grown in Papayal, and that a palm oil refinery to produce biofuels should be installed there.

Oil palm is the third-largest crop in Colombia, planted on more than 400,000 hectares and employing over 130,000 workers, according to the international organisation Solidaridad, which promotes responsible food production and sustainable alternatives to fossil fuels.

Oil palm has great production potential compared to other oil-producing plants, and its use is growing in the food, hygiene and cosmetics industries as well as the emerging biodiesel industry.

But in Las Pavas, palm oil is no longer being produced, and the legal battle continues.

In 2009, the companies in question got the police to evict the local campesinos. The incident cost Daabon its contract as the main palm oil supplier for The Body Shop cosmetics chain, whose parent company is L’Oreal.

Daabon preferred to pull out of the project rather than negotiate with Asocab, as The Body Shop had urged it to.

The local campesinos returned to Las Pavas in 2011. Since then they have been living there, some of them in shifts, in a settlement with two dirt roads running between improvised dwellings covered with black plastic.

The campesinos constantly complain about intimidation, destruction of crops, tires shot out on Asocab’s tractors, theft of livestock, or fires set to seeds stocks or nearby brush by incendiary device attacks on the camp.

“An outlaw group no longer has control; a few companies do,” said Payares.

“We haven’t had a human victim yet, because we have been smart enough to keep that from happening,” said Efraín Alvear, the community’s historian.

“Conquest without rifles” is the title of the book he has been writing by hand for years about the story of Asocab, he told IPS.

After their inclusion in the registry of victims and the award of the National Peace Prize, the campesinos plan to change the name of Las Pavas. “That name reminds us of difficult times,” says Misael Payares. It will now be called Milagro de Dios (Miracle of God).