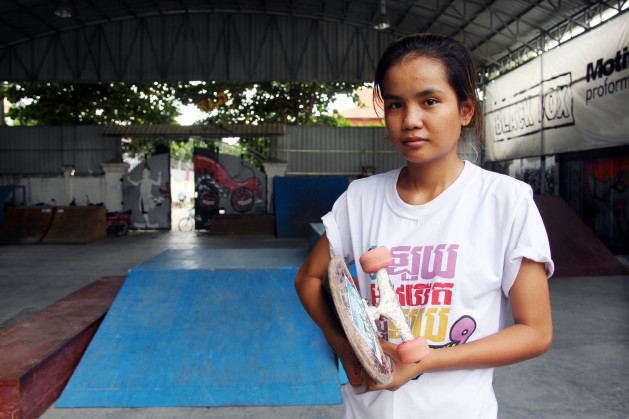 Something as simple as skateboarding is lifting the lives of many Cambodian youth. Credit: Simba Shani Kamaria Russeau/IPS.

PHNOM PENH, Nov 30 2013 (IPS) - An array of colourful quarter pipes, bank ramps and a fun box come to life as a clutch of Cambodian youngsters do balancing tricks, kick-flips and kick turns. The all-girl session at a skating facility near the Russian Market here is facilitated by 20-year-old Kov Chansangva, popularly known as Tin.

“I’ve been doing it every day for a year. I feel happy when I get on the skateboard. It releases stress. My life has become better. I feel more responsible and have more confidence to overcome life’s obstacles,” Tin tells IPS.

Skateboarding is new in this Asian country, but it is changing lives.

“One advantage that skateboarding has in a place like Cambodia is that, as a new sport, it lets girls participate more easily."

Cambodia, with its conflict-ridden past, has hundreds of thousands of children who work on the streets to fend for themselves or supplement the family income. There are an estimated 10,000 working children in Phnom Penh alone and half of them are girls.

Many youngsters in the 5-17 age group work in garbage dumps, brick factories and fish processing units. They are often at risk of being drawn into gambling and drug abuse.

In this bleak scenario, skateboarding has come as a refreshing new way of life.

Not only is it bridging the gender gap – according to the World Economic Forum’s (WEF) 2013 Gender Gap Index, Cambodia is the lowest-ranked country in the East Asia and Pacific region – it is helping put street children back in school.

“In the past, girls didn’t get involved in sports because they thought they couldn’t do what the boys could. Now as they start to see more and more women skaters, they realise they can do better than the boys,” adds Tin.

Every week, nearly 200 students come to the skateboarding facility the capital, run by a non-profit organisation called Skateistan Cambodia.

“One advantage that skateboarding has in a place like Cambodia is that, as a new sport, it lets girls participate more easily,” Alix Buck, development manager for Skateistan Cambodia, tells IPS.

The organisation uses skateboarding as a tool for empowering youngsters in the 5-18 age group. Over 50 percent of its skaters are children who work on the streets and nearly 40 percent of them are girls.

“Gender-based stereotypes are non-existent in skateboarding because the sport is new here. On the other hand, more commercialised sports like football are difficult because these have been defined as male-dominated,” Buck says.

These provide education, counseling, shelter and health services to youth groups, including those from low-income families and those at risk of exploitation or trafficking.

So while the children are first attracted to skateboarding, gradually these organisations help them access education and healthcare.

“I want to go back to school to study and become a lawyer so I can improve my family’s life,” says Tin.

Over half the country’s 15 million people are under the age of 25. With the average income being less than a dollar a day, many people migrate from rural to urban areas. According to the National Institute of Statistics, nearly a quarter of the population consists of internal seasonal migrants, of which nearly three quarters – around 2.5 million – are under the age of 30.

“Substance abuse and gambling is a big problem for the youth,” Rath Chansopheakna, a 24-year-old skateboard and break dance instructor, tells IPS.

“Before I started studying at PSE, there was nothing to do. Most kids in Cambodia leave school and land in the streets,” he says.

PSE, a French non-profit organisation, is dedicated to providing food, healthcare, education and vocational training to children who work on the streets of cities like Phnom Penh, Siem Reap and Sihanoukville.

“At PSE, there are kids from many different social backgrounds. But skateboarding helps break down class barriers, with poorer kids learning not to fear the well-off ones,” Chansopheakna says.

Sometimes skateboarding is combined with art.

For instance, Skateistan offers an hour of skating classes and an hour of art classes. It uses art to level the playing field as art is accessible to all children, regardless of education. Their classes include photography, film production, sculpture and painting.

“When I first started teaching kids how to skateboard, I didn’t know it would become an amazing tool to help and motivate kids in Cambodia,” Benjamin Pecqueur, Skateistan country and operations manager, tells IPS.

“We provide opportunities for kids to go to school through skateboarding. Our art-based classes give at-risk youth the opportunity to express their opinions on issues concerning them,” Pecqueur says.

He narrates an interesting story. He was working for PSE when his sister sent his old skateboard from France to Phnom Penh. Excited, he raced out with it. In 10 minutes, 20 students were around him, eager to try the new thing. That’s when the director of PSE asked Pecqueur to initiate skateboarding activity for children.

Pecqueur later joined Skateistan, which helped set up the skating facility in Phnom Penh, the only one of its kind in Cambodia. Now PSE also sends kids there to learn skateboarding.

“Youth are essential to Cambodia’s development and, given the right tools, they can play a role in shaping its future,” he says.