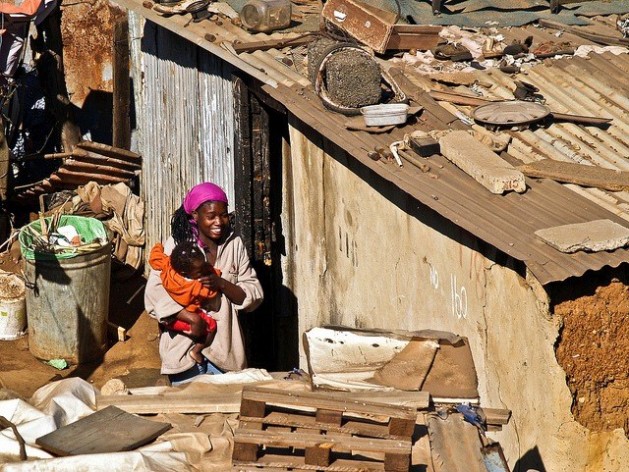 The richest 66 people have the same amount of wealth as the bottom half of humanity. Credit: Bigstock/IPS

NEW YORK, Jun 17 2014 (IPS) - Two major injustices – inequality and climate change – are threatening to undermine the efforts of millions of people to escape poverty and hunger.

By concentrating wealth and power in the hands of a few, inequality robs the poorest people of the support they need to improve their lives. And as climate change devastates crops and livelihoods, it undoes poor people’s efforts to feed their families.

But an historic opportunity is on the horizon as the sun sets on the Millennium Development Goals (MDGs). Right now the United Nations is in the midst of a heated debate about the new set of Sustainable Development Goals. This new framework for global development could end poverty and save the planet.

Laudable progress has been made under the MDGs, which are set to expire next year. The goal to halve extreme poverty has been met – an achievement to celebrate. The MDGs have inspired a common purpose and ambition, and there have been many development successes over the last 14 years.

Yet the twin challenges of inequality and climate change have not been adequately tackled – and Oxfam fears the same mistake will be made again. If we are to create a fairer, healthier world, the new Sustainable Development Goals must be ambitious, and backed up by strong action on climate change.

Recently, Oxfam revealed that the world’s 85 richest people have as much wealth as the poorest 3.5 billion. That figure was recently revised. Now the richest 66 have the same as the bottom half of humanity. If the global community fails to curb the widening gap, a host of related economic and social problems will ensue, including the undermining of efforts to eradicate poverty. We can only lift up those at the bottom if we tackle the extreme wealth at the top.

At the same time, climate change is threatening to undo progress made in confronting poverty over the last decade. More than 800 million people are at risk of hunger. Through its devastating impact on crops and livelihoods, climate change is predicted to increase that number by as much as 20 percent by 2050.

It’s up to the U.N. Framework Convention on Climate Change to set the global framework for climate action. But the Sustainable Development Goals offer the opportunity to complement this and go further, dealing with climate change in the context of poverty alleviation and sustainable development. Action on climate change – in the framework of development after 2015 – could create significant political momentum, and increase ambition for a strong global climate deal.

For these reasons, Oxfam has released a paper on addressing inequality and climate change in the post-2015 framework.

To address climate change, we propose dedicated goals on climate change and energy, food and hunger, water, and risk, as well as integrating targets on climate throughout the framework. These measures can help ensure development consistent with limiting global warming to 1.5 degrees Celsius.

The U.N. working group on the Sustainable Development Goals has released a ‘Zero Draft’ containing many proposed goals and targets Oxfam would welcome – including standalone goals on inequality and climate change. As the number of goals and targets are reduced and refined in the process of agreeing a new post-2015 development framework, it is essential that these remain.

There’s also room for targets that are much more ambitious than those currently proposed.

In the inequality goal, we must be bolder. Oxfam backs the target proposed by former Chief Economist to the World Bank and Nobel Prize winner Joseph Stiglitz to reduce income inequality so that the income of the top 10 percent is no more than that of the bottom 40 percent.

Since the world is already on track to end one-dollar-per-day poverty, we must set the bar higher and eradicate two-dollar-per-day poverty. We must commit to achieving universal health coverage and universal education, provided through well-funded public services. Finally, the proposed climate goal should include targets to limit global warming to 1.5 degrees Celsius and promote low carbon sustainable development.

If we get it right, a bold new framework for global development next year, together with agreement at the U.N. climate talks in Paris, could provide the impetus for a transition to a more equal world – a world without the scourge of poverty and climate change.

This would transform millions of lives. So let us embrace the new beginning the Sustainable Development Goals offer.

*Winnie Byanyima is the executive director of Oxfam International