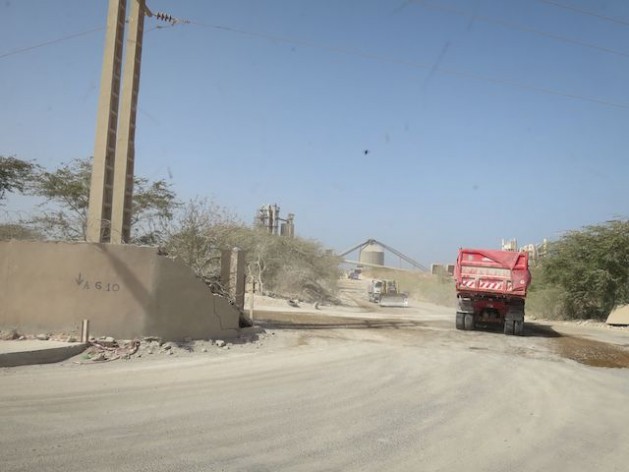 The Dangote cement factory, set to be one of the largest on the continent, is now in Galene, Poute and Dangane, villages close to Thies, Senegal’s third-biggest city. Credit: Doreen Akiyo Yomoah/IPS

DAKAR, Jun 22 2014 (IPS) - While the cement factories in Senegal are at war, ostensibly over the environmental impact one company will have on this West African nation, experts have cautioned that as the government plans to radically develop and industrialise the country, striking a balance between environmental protection and development will be key.

“I don’t think we can want one thing, and also want its opposite. We need cement to help industry in Senegal. At the same token, it will have adverse effects on the environment and we have to try and minimise them,” Dr. Thomas Ibrahima, a researcher at the Senegalese Institute of Agricultural Research (ISRA), told IPS.

Sococim, the Senegalese subsidiary of Vicat, a French cement manufacturing company, is at loggerheads with the government of Senegal.

"Even ministers admit to not being able to follow all [the recommendations] in the environmental impact studies." -- Djim Nanasta, Environmental Development Action in the Third World

The French company began suing the state in November 2013, at Common Court of Justice and Arbitration (CCJA), a regional arbitration court in Abidjan, Côte d’Ivoire, for allowing Dangote Cement, a Nigerian cement conglomerate, to set up shop in Senegal.

Dangote reportedly paid the descendants of Cheikh Amadou Bamba, a renowned Senegalese religious leader, a 12.6-million-dollar settlement to develop the factory on forest lands they inhabit. The factory, set to be one of the largest on the continent, is close to Thies, the country’s third-biggest city. The villages of Galene, Poute and Dangane are in close proximity to the site.

IPS was not allowed entry near the site, and was banned from entering the village of Galene. However, some villagers in Poute have expressed relief that the factory has come to the area.

Aboulaye Fall, a Dangote employee and Poute resident, told IPS: “Dangote is ready to help Poute. The company is going to provide electricity and roads for easier travel. The company is decreasing youth unemployment, and most of us are very happy to have the factory here in Poute.”

But Djim Nanasta, programme officer at Environmental Development Action in the Third World (ENDA), an international environmental and energy NGO based in Dakar, told IPS that due to cultural pressures, “people may have objections about the setting up of the factory, but they may not feel that they can openly express their complaints.”

According to Nanasta, when conflict arose between Sococim and Dangote, the youth in Poute formed a coalition in support of Dangote. However, he pointed out that one of the concerns of a cement factory, is that “they emit a lot of dust. This affects the population by causing respiratory problems.”

Boubacar Camara, the CEO of Sococim, said in an earlier interview: “This is the first time in the history of Senegal that we have seen a plant built in violation of all the rules.” Camara claimed that the requirements — acquiring permits, and conducting environmental impact studies, which are necessary steps for opening a cement factory in this West African nation — had been flouted by Dangote.

Abdoulaye Ndaw, a senior legal officer and the chief of knowledge and information management at CCJA, told IPS that the case was still pending with the court, and no ruling has been made on whether Dangote has violated any laws.

According to Ndaw: “Vicat, which made heavy investments to control the entire national cement [industry], does not want to see their business plunge into instability with the entry of a new cement [competitor].”

Cement manufacturing is not the only industrialisation taking place here. President Macky Sall went to Paris in February to solicit donations to fund Emerging Plan Senegal (PSE), the government’s plan to radically develop and industrialise the country.

PSE focuses heavily on industrialisation, and while cement manufacturing is hard on the environment, this type of activity will increase. Senegal already exports phosphate. Chemical Industries of Senegal, the country’s largest phosphate developer, is expected to begin providing two million tonnes of phosphate per annum, which will place a significant toll on the environment.

The president has also expressed a desire to make mining, which is notoriously destructive to the environment, one of the pillars of Senegal’s development, saying: “We’re committed to putting all the conditions in place to attract companies.”

However, Francis James, country director of the United Nations Development Programme, has said that two-thirds of Senegal’s soil, or 34 percent of the country’s surface, is affected by environmental degradation, and the country is losing 50,000 hectares of land per year.

Moustapha Ndiaye, an environmentalist at the Ministry of Environment and Sustainable Development, told IPS that in the face of industrialisation: “There are many laws that exist to protect the environment. It’s absolutely necessary for companies to respect them.”

But Nanasta cautioned that although cement companies may comply with environmental regulations in order to be given the go-ahead to commence operations, there is hardly any follow-up. “Even ministers admit to not being able to  follow all [the recommendations] in the environmental impact studies,” Nanasta said.