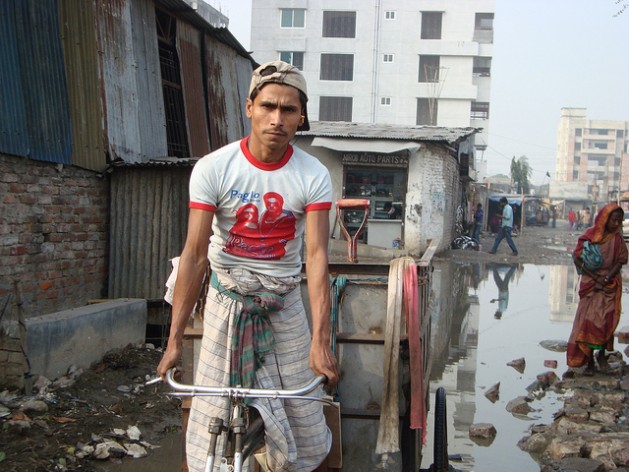 Slum populations in the developing world have increased from 650 million in 1990 to 863 million in 2012. Credit: Naimul Haq/IPS

SINGAPORE, Jun 5 2014 (IPS) - With over 20,000 international participants, a triple summit wrapping up today in Singapore is generating an abundance of ideas on sustainable cities.

Combining the World City Summit, Singapore Water Week and the CleanEnviro Summit into one mega-event (at one venue), the country has brought together urban policy-makers, environmentalists, water experts and business people to discuss the future of urban planning, even as U.N.-Habitat warns that the number of city dwellers could double by 2050 to nearly 6.5 billion people.

“Unless we make a concerted effort to change the way we live and operate, the world is on course to enter uncharted, potentially dangerous territory,” warned Choi Shing Kwok, permanent secretary of Singapore’s ministry of the environment and water resources, addressing a Business Forum at the World Cities Summit here this week.

One of the major themes on the table has been the issue of environmental sustainability and the urgent need for better communication between local government authorities and community members to create more transparent and participatory governance at the grassroots level.

“Unless we make a concerted effort to change the way we live and operate, the world is on course to enter uncharted, potentially dangerous territory." -- Choi Shing Kwok, permanent secretary of Singapore’s ministry of the environment and water resources
Few can miss the significance of Singapore as a location for the triple-header: an island nation of four million people, it is now among the world’s top three richest countries in terms of gross domestic product (GDP), clocking roughly 274.7 billion dollars in 2012, according to the World Bank.

A highly advanced developed nation with sound environmental policies, the Southeast Asian country is always proud to showcase its journey from a third world to a first world country within a single generation as a model for others to emulate.

In a nod to his government’s decision to host the gathering for the second year running, Kwok told the 130 mayors present at the conference, “Governments have an important role to play in steering national development through good public policies and by working with people and private sectors to shape their countries’ future.”

The U.N. estimates that 96 percent of urban growth in the next three decades will take place in developing countries, many of which are already straining to effectively manage their bulging metropolises.

Slum populations in the developing world have increased in number from 650 million in 1990 to 863 million in 2012. More than half of these slum dwellers reside in Asia.

Asia is also expected to shoulder the lion’s share of the burden of city planning, being home to 56 percent of the world’s largest cities, including seven of the top 10 megacities (with populations of over 10 million people).

Most officials are agreed that tackling the challenge of urban growth will require a multi-sector approach that mobilises electronics and technology in the service of poverty reduction and environmental sustainability.

Bindu Lohani, vice president of knowledge management and sustainable development at the Asian Development Bank (ADB) believes that, in order to achieve the Millennium Development Goals (MDGs), emphasis must be placed on developing “local governments as the delivery agents of basic services.”

He added that municipal governments in the developing world face enormous challenges due to a lack of autonomy in urban planning, and limited avenues through which to raise financial resources.

China has made strides in overcoming these obstacles, according to Qiu Aijun, deputy director-general of China’s Center for Urban Development.

She drew attention to three rural towns – Longgang, Baigou and Huixian – that have developed into cities in the past 10 to 20 years because the Chinese authorities eliminated multi-tiered approval systems and adopted one localised system for processing community development projects and businesses.

“As grassroots governments did not have approval rights, we reformed laws to give them those rights. Instead of needing eight different chops [approval stamps] to start a business, you now need just one,” she explained.

Several of the mayors in attendance at the summit advocated using social media as a tool in building a sustainable future.

Among them was Ridwan Kamil, mayor of Bandung, Indonesia’s third largest city, who interacts with the community through Twitter, where he currently has 545,000 followers; he has also convinced city officials and other departments to create their own social media accounts.

“In future, a majority of the city’s programmes will be run collaboratively, where citizens participate in improving the quality of public services,” Kamil stressed during a forum discussion earlier this week.

“People don’t want change, [so] we need to take people through change,” argued Moore at a panel discussion entitled ‘Way Forward’. Her campaign to make Sydney a more bike-friendly and pedestrian-friendly city, she said, took years of communicating with the community before people changed their ways.

Others stressed that new forms of communication must be deployed in tandem with the building of solid infrastructure.

As Anibal Gaviria Correa, mayor of Colombia’s second-largest city, Medellin, pointed out, extending public transport systems to the most marginalised suburbs helped to reduce the soaring crime rate in what was once considered the world’s most violent urban center, with a homicide rate of 380 per 100,000 in 1991.

“This allowed the city’s poorest residents to access education, jobs and public spaces, helping in social upliftment, and building a more inclusive society,” he noted. Though still high, homicide rates in Medellin fell by 50 percent between 1990 and 2000.

Waste management was another major issue under the microscope here this week, particularly for the governments of Asian countries, many of which lack effective recycling, treatment and disposal systems.

For instance, only 14 percent of Indonesia’s wastewater is treated, while that number falls to 10 percent in the Philippines, nine percent in India and just four percent in Vietnam.

According to the Asian Development Bank, 23 percent of the population (roughly 850 million people) in the Asia-Pacific Region practice open defecation, causing water and ground pollution and leading to the outbreak of diarrhoeal diseases.

A mere 10 percent of solid waste generated in Asian towns and cities winds up in poorly managed landfill sites.

In an interview with the conference newspaper ‘Solutions’, Chen Hung-Yi, of the Environmental Protection Administration of Taiwan, said that governments should introduce financial incentives for people to generate less waste and thus reduce reliance on landfills.

“In Taiwan, households and businesses are charged for garbage collection, while recycling is free,” Chen said, arguing that such a system will soon prompt people to take more responsibility for their solid waste.

South Korea and Japan have adopted a similar system, though China is yet to follow suit, even though the country is the world’s leading generator of municipal solid waste, creating 150 million tons annually.

The United Nations estimates that cities will generate more than half the rise in greenhouse gas emissions over the next 20 years, highlighting the urgent need for communication and action on smart urban planning.