In this column, Emma Bonino, former Italian Minister of Foreign Affairs and former European Commissioner, argues that the West and Iran would be well advised to take advantage of what may be their last similar opportunity to reach a definitive agreement on Iran’s nuclear programme, because the costs of failure to do so are incalculable.

ROME, Nov 17 2014 (IPS) - In just a few days, a meeting is scheduled that will be decisive for the security of the Middle East and of the whole world.

Nov. 24 is the deadline for final negotiations between high representatives of six world powers and Iran seeking to reach a comprehensive agreement on the development of the Iranian nuclear programme. 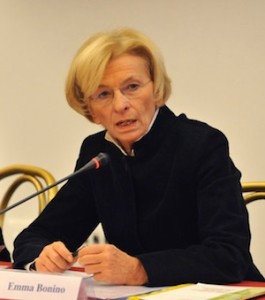 The six powers include three European countries (Germany, United Kingdom and France) as well as China, the United States and Russia. This negotiating group is known in Europe as E3+3.

The interim agreement on Iran’s nuclear programme signed in November 2013 delivered the E3+3’s most substantial guarantees to date, instituting rigorous supervision of the Iranian nuclear programme while limiting and reducing its production of enriched uranium. Since then progress has been made at several talks and the deadline for their conclusion has been set for Nov. 24.

It is hoped that agreement will be reached on the remaining difficult issues and that the foundations for a final agreement will be laid. If this does not happen, it is feared that further postponement may provide more opportunities for those opposed to diplomatic means to derail the process.

This would be a serious reverse when so much progress has been made, creative technical solutions have been proposed, and an agreement is within reach that would peacefully and effectively address the concerns of the E3+3 about proliferation in regard to Iranian nuclear plans, as well as respect Iran’s legitimate aspirations to develop atomic energy for civilian use, and its sovereignty.

“An agreement [on Iran’s nuclear programme] must also renew the West’s commitment to Iran by opening up new options in the pursuit of regional interests that partly coincide, at a time when Europeans are once more militarily engaged at Iran’s gates”

The European countries have invested vast resources to attain this stage of the negotiations, enforcing unprecedented economic sanctions against Iran as well as shouldering the consequences on the regional scale of maintaining Tehran in isolation.

Europe must use the little time it has left to encourage the negotiating parties to resolve the pending issues by making reasonable concessions, while at the same time avoiding matters that are not essential to a good accord. The Europeans should also work alongside the U.S. government to allay the fears of regional allies sceptical about the long-term strategic benefits of a definitive nuclear pact.

The cost of failure, in economic and security terms, is incalculable.

Failure would probably result in an unrestricted or timidly supervised Iranian nuclear programme, without robust verification to prevent its possible diversion for military purposes.

A negative outcome would foreseeably lead to intensification of sanctions and the isolation of Iran, which could in turn be a stronger incentive for Tehran to try to develop nuclear weapons. This would further undermine Western interests and create an increasingly explosive dead-end situation in military terms.

The costs to Iran of failure, in economic and security terms, are incalculable.

Some of those opposed to an agreement, who can be found in either negotiating party, may wish for consequences of this nature. But responsible leaders should not share this attitude.

If a definitive pact is forged, the E3+3 will establish the truly historic precedent of safeguarding global security through containment of Iran’s capability to develop nuclear weapons.

A final agreement would also strengthen trust and create the necessary political space for the European Union to engage Iran again in human rights dialogue of the kind that took place in the past, which makes so much sense and is so badly needed now.

Crucially, an agreement must also renew the West’s commitment to Iran by opening up new options in the pursuit of regional interests that partly coincide, at a time when Europeans are once more militarily engaged at Iran’s gates and when cooperation on at least partially shared interests seems possible and necessary, without ignoring the many circumstances in which Iranian and Western interests continue to diverge.

Iran and the E3+3 are closer than ever to resolving the nuclear question.

Non-proliferation, global and regional security and the pacification of conflict hotspots in the Middle East, as well as the exemplary effect of multilateral diplomacy during these convulsed times, would without exception benefit significantly from a firm and fair agreement.

All the parties have the option of distancing themselves from a nuclear agreement, but if they do so it will be in the knowledge that the alternatives are far worse, and that they ought to pay heed to their own best strategic interests. They should all know, also, that there may never be another opportunity like this one to close a definitive nuclear deal. (END/IPS COLUMNIST SERVICE)