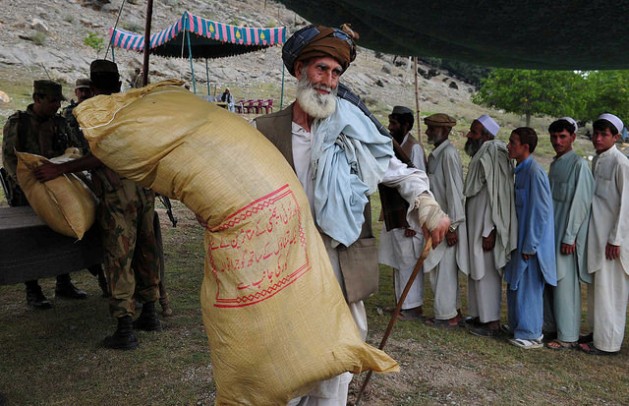 An elderly displaced man carries a sack of rations on his shoulder in northern Pakistan. Credit: Ashfaq Yusufzai/IPS

PESHAWAR, Mar 10 2015 (IPS) - A doctor shakes his head in despair as he examines a 10-year-old child at the Jalozai refugee camp, about 35 km by road from Peshawar, capital of Pakistan’s northern Khyber Pakhtunkhwa (KP) province.

“He is severely malnourished,” Dr. Zeeshan Khan tells IPS. “He is vulnerable to diseases like diarrhoea, and other infections.”

“Back home we had agricultural land, which produced enough food for us. We used to sell our surplus grain and vegetables for an income, but now we are becoming beggars." -- Shah Faisal, a refugee from Khyber Agency in northern Pakistan
Identifying the problem is about all the doctor can do. In this camp, there are too many refugees and too little food. Until that situation changes, kids like little Ahmed Ali will continue to feel the pangs of hunger, and the creeping fear of illnesses that his body is too weak to fight off.

Ali came to Jalozai with his family last year, when Operation Khyber-1, a government-led military offensive in their native Khyber Agency, part of the Federally Administered Tribal Areas (FATA), forced thousands to flee for their lives.

Ali, together with his parents and siblings, has now joined the ranks of some three million internally displaced persons (IDPs) in northern Pakistan, forced out of their towns and villages over the course of a decade: first by militant groups operating in this remote tribal belt that borders Afghanistan, and – more recently – by Pakistan’s armed forces, as they carry out a determined campaign against designated terrorist groups in the area.

One such offensive code-named Operation Zarb-e-Azab began last June, with the military focusing its firepower on the 11,585-square-km North Waziristan Agency where militants have operated with impunity since crossing over the Afghan border in 2001.

Launched in response to the deadly June 2014 terror attack on the Karachi International Airport, the operation has been hardest on civilians.

An estimated 900,000 people were displaced last year, nearly all of whom took refuge in Bannu, an ancient city of the KP province where ‘tent cities’ were erected to house some 90,000 families.

Each fresh wave of displacement has put more pressure on the Khyber Pakhtunkhwa government to feed, heal and shelter thousands of newly uprooted citizens, while simultaneously tending to some 2.1 million ‘permanent’ refugees who have fled the various agencies of FATA since the Taliban and other militant groups claimed the region as a base of operations in 2001.

Meeting the needs of such an enormous refugee population has put tremendous strain on the government.

Provincial Disaster Management Authority Spokesman Adil Khan says that each family receives a monthly allocation of 90 kg of wheat, one kg of tea leaves, five kg of sugar, two kg of rice and two litres of oil in order to alleviate extreme hunger.

But most households IPS spoke with, in camps across the northern province, say this isn’t enough for families comprised, on average, of 10 or more people.

In Bannu, for instance, there are still 454,000 displaced persons, despite robust efforts to relocate families or unite them with their relatives in the area. According to the director-general of health for the KP province, Pervez Kamal, more than 15 percent of the remaining IDPs were malnourished as of January 2015.

“The foodstuffs we get aren’t sufficient to feed my 10-member family,” says Darwaish Gul, a former resident of FATA’s Bajuar Agency, who now resides in a camp in Bannu.

“Back home, we were farmers, growing our own food,” the 60-year-old refugee tells IPS. “We always had enough grain, vegetables and fruits. Now, we have only one meal a day, and always go to sleep hungry.”

The government has refuted such claims, insisting that its emergency aid and food rations are sufficient to feed every hungry mouth in the camps.

But a United Nations report released in the summer of 2014 pointed out that 31 percent of IDPs didn’t receive relief supplies or food items since they lacked computerised national identity cards. 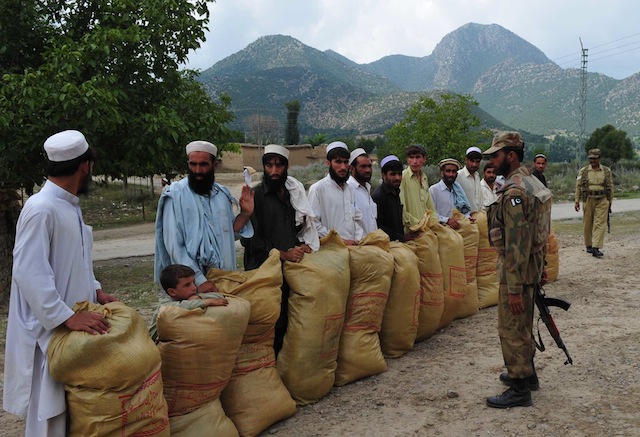 Of the refugees who arrived from North Waziristan alone, over 15 percent did not qualify for food aid. These included displaced families who had no male members (seven percent), families headed by children (four percent) and families headed by people with disabilities, or elderly persons (five percent).

The situation was compounded by the fact that many of the displaced from North Waziristan trekked for miles in 45-degree Celsius heat to reach Bannu. Scores collapsed along the way, and those who made it safely were severely malnourished, dehydrated or otherwise weakened by the journey.

With limited food and medical supplies, thousands have not fully recovered from the ordeal. They are in need of specialised care, but only the most basic services exist to meet their many needs.

Iqbal Afridi, the FATA representative of the Pakistan Tehreek-e-Insaf (PTI), an opposition political party, tells IPS that the situation is “extremely precarious”, with scores of families either experiencing, or on the verge of, hunger.

He runs an association of affected people, and last November he led a contingent of IDPs from Bara, a township in the Khyber Agency, to the Peshawar Press Club to protest – among other things – the lack of medical supplies, inadequate food rations for the displaced, and miserable – if not non-existent – water and sanitation facilities, which has enabled the spread of diseases.

Others say they just want to expedite government clearance from the camps so they can return to their homes. Nearly every week, groups of IDPs protest in Peshawar, either through marches or sit-ins, always condemning the lack of resources allocated to their basic survival.

“We have been demanding early repatriation to our ancestral homes as our lives have become miserable,” Shah Faisal, a refugee from Khyber Agency now living in a camp in KP, tells IPS. “We left our home for the sake of peace but peace is still elusive.

“Back home, we had agricultural land, which produced enough food for us. We used to sell our surplus grain and vegetables for an income, but now we are becoming beggars,” he contends. 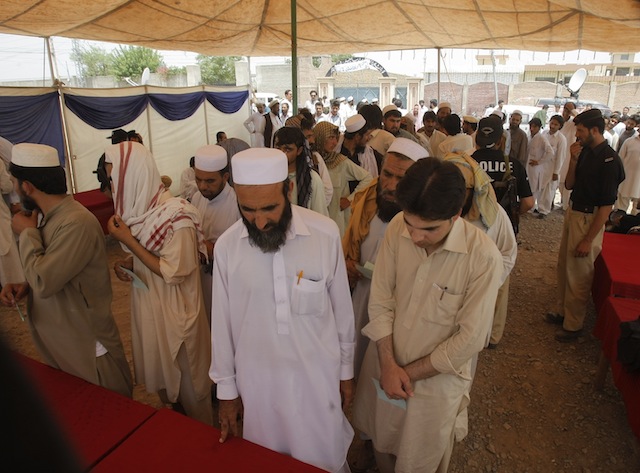 IDPs in northern Pakistan wait in line for rations at a refugee camp in the Khyber Pakhtunkhwa province. Credit: Ashfaq Yusufzai/IPS

Some experts say a health crisis is not far off. Jawadullah Khan, a doctor who has worked extensively with refugees in the Bannu and elsewhere, tells IPS that people here are badly in need of balanced diets, and clean water.

“We have been trying our level best to provide the best healthcare facilities to the displaced population as they are more vulnerable to diseases,” he says.

In Jalozai refugee camp, which houses families from five out of FATA’s seven tribal agencies, Ahmed Ali has finished with the doctor and is walking back to his tent. Until the government of Pakistan comes up with a national strategy to deal with its displaced population, this little boy will have no respite from hunger.