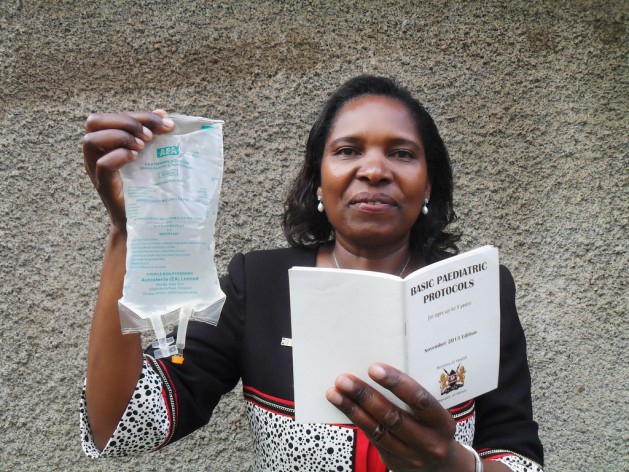 Prof Grace Irimu shows IPS a drip feed bag and a copy of Kenya’s ‘Basic Paediatric Protocols’ as she explains the importance of intravenous treatment in saving the lives of young children affected by acute watery diarrhoea. Credit: Miriam Gathigah/IPS

NAIROBI, May 23 2015 (IPS) - Acute watery diarrhoea is a major killer of young children but misunderstanding over the benefits of fluid treatment is preventing many Kenyan parents from resorting to this life-saving technique and threatening to reverse the strides that the country has made in child health.

The 2014 Kenya Demographic and Health Survey, released in April this year, reports that the country’s under-five mortality rate fell to 52 deaths per 1,000 live births in 2014, down from the 74 deaths in 2008-09, but still far from the 32 per 1,000 live births targeted under the Millennium Development Goals (MDGs).

“Parents must … understand that rapid fluid treatment is life-saving for children diagnosed with shock or poor blood circulation due to diarrhoea” – Prof Grace Irimu, Associate Professor of Paediatrics, University of Nairobi

The primary treatment for acute watery diarrhoea is rehydration, administered intravenously in the most severe cases of very young children suffering from shock after losing excessively high quantities of body fluids. A fluid bolus – or rapid liquid dose – delivered directly through an intravenous drip allows a much faster delivery than oral rehydration.

However, notes nurse Esther Mayaka at the Jamii Clinic in Mathare, Nairobi, “parents of children brought to hospital with acute watery diarrhoea are refusing to have them put on [drip] fluid treatment and this is a major concern because diarrhoea is a leading killer among children and giving fluids is still the main solution.”

She told IPS that the ongoing rains and floods in many parts of the country “have created a comeback for diseases like cholera whose most telling sign is watery diarrhoea which needs to be managed with fluids.”

According to Prof Grace Irimu, Associate Professor of Paediatrics at the University of Nairobi, the reluctance to resort to drip fluid treatment has arisen due to misunderstanding generated by a Fluid Expansion As Supportive Therapy (FEAST) study in 2011 to establish whether the bolus technique was the best practice to use among children diagnosed with shock.

The FEAST study, which was conducted among children in Kenya, Tanzania and Uganda, found that fluid boluses increased 48-hour mortality in critically-ill children with poor blood circulation or shock in these resource-limited settings in Africa, but Irimu told IPS that the study excluded diarrhoea and only studied illnesses associated with fever, such malaria and sepsis.

“Parents must therefore understand that rapid fluid treatment is life-saving for children diagnosed with shock or poor blood circulation due to diarrhoea,” she said.

The Kenya Paediatric Association is also trying to set the record straight and, in a statement shared with IPS, the association reiterated that “diarrhoea complicated by severe dehydration is one of the biggest killers of children globally.”

According to the paediatrics association, the FEAST study excluded children with diarrhoea and dehydration because “the value of giving fluids in this group is well known. Giving appropriate fluid therapy is essential.”

Prof Irimu told IPS that the FEAST study had led to a revision of the ‘Basic Paediatric Protocols’, Kenya’s national guidelines for paediatric care, and clauses that address the treatment of diarrhoea were also revised.

Previously, a child diagnosed with shock as a result of diarrhoea would be given fluids in three cycles, every 15 minutes depending on the response. Now, the child receives the fluids in two cycles and if there is no response, health providers are advised to proceed to slower fluid administration where the child is given the amount that the body needs, depending on the level of dehydration.

Meanwhile, the country continues to make strides in dealing with HIV/AIDS – another critical health issue covered by the MDGs – among children. Studies show that the number of children with HIV aged between 18 months and 14 years fell from 184,000 in 2007 to 104,000 in 2012, according to the most recent Kenya Aids Indicator Survey.

However, Prof Joseph Karanja, a reproductive health and HIV/AIDs expert in Nairobi, says that the country can still do better because “through available antiretroviral drugs as a preventive measure among HIV positive mothers, HIV transmission to the infant can be reduced to as low as one percent.”

Dr Pauline Samia, a paediatric neurologist and a board member of the Kenya Paediatric Association, says that there is also a commitment to address conditions that challenge the management of HIV among children such as epilepsy.

Regarding progress in other MDGs, some progress has been made in reducing the prevalence of underweight children less than five years of age, one of the goals set for eradicating extreme hunger and poverty.

On the front of improving maternal health, the survey says that while maternal mortality remains high at 488 deaths in every 100,000 live births, in the past five years more than three in five births (61 percent) took place in healthcare facilities, a marked improvement compared with the 43 percent in 2008.