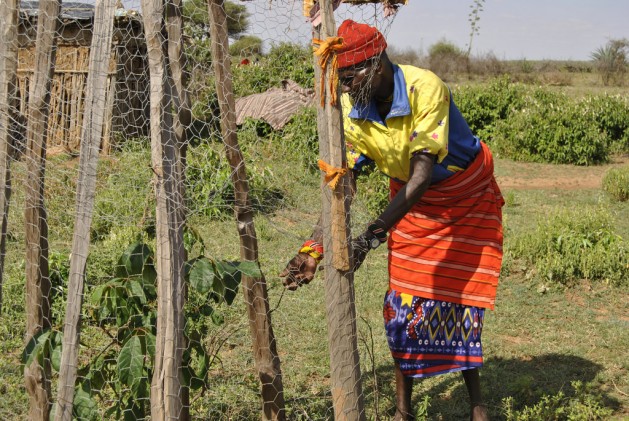 SAMBURU, Kenya, Jul 30 2015 (IPS) - Sipian Lesan bends to attend to the Vangueria infausta or African medlar plant that he planted almost two years ago. He takes great care not to damage the soft, velvety, acorn-shaped buds of this hardy and drought-resistant plant. ”All over here it is dry,” says the 51-year-old Samburu semi-nomadic pastoralist.

“We hope that every manyatta [homestead] will have a small food forest and that these will grow in concentric circles until they meet and touch each other and expand, creating a continuous food forest" – Aviram Rozin, founder of Sadhana Forest
Sipian is from Lekuru, a remote village located in the lower ranges of the Samburu Hills, an area dotted by Samburu homesteads commonly known as ‘manyattas’, some 358 km north of Kenya’s capital Nairobi. Here, the small villages are hot and arid, dominated by thorny acacia and patches of bare red earth that signify overgrazed land.

Samburu County is one of the regions in Kenya ravaged by recurrent drought, with most of the population living below the poverty line.

Climate change has made pastoralism an increasingly unsustainable livelihood option, leaving many households in Samburu without access to a daily meal, let alone a balanced diet.

“Animals have and will continue to die due to severe drought,” said Joshua Leparashau, a Samburu community leader. “The community still wants to hold on to the concept that having many livestock is a source of pride. This must change. If we as a community do not become proactive in curbing the menace, then we must be prepared for nature to destroy us without any mercy.”

As he looks after his fruit-producing sapling, Sipian tells IPS that some decades ago, before people he calls “greedy” started felling trees to satisfy the growing demand for indigenous forest products, his community used to feed on their readily available wild fruits during extreme hunger.

Now, through a concept new to them – dubbed food or garden forest, and brought to Kenya by Israeli environmentalist Aviram Rozin, founder of Sadhana Forest, an organisation dedicated to ecological revival and sustainable living work – the locals here are adopting planting of trees and shrubs that are favourable to the harsh local weather in their manyattas. 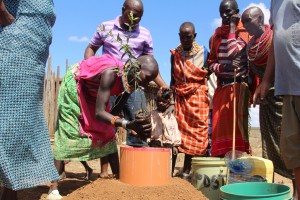 On a voluntary mission to help alleviate the degraded land and food insecurity in this part of northern Kenya, Rozin said that his vision would be to see at least each manyatta owning a food forest.

“The rate at which the community is embracing the concept is positive,” he said. “We hope that every manyatta will have a small food forest and that these will grow in concentric circles until they meet and touch each other and expand, creating a continuous food forest.”

However, the work of Sadhana Forest is not limited to forestation, as 35-year-old Resinoi Ewapere, who has eight children, explained.

“I used to leave early in the morning in search of water and return after noon. My children frequently missed school owing to the shortage of water and food.” But this daily routine came to an end after Sadhana Forest drilled a borehole from which water is now pumped using green energy – a combined windmill and solar energy system.

“Apart from the training we receive on planting fruit-producing trees and practising low-cost permaculture farming, we currently receive water from this centre at no cost,” Ewapere told IPS.

According to Rozin, Sadhana Forest’s initiative to help the Samburu community plant the 18 species of indigenous fruit trees which are drought-resistant and rich in nutrients is also part of a major conservation effort in that the combination of “small-scale food security and conservation of indigenous trees. will also create a linkage between people and trees and they will protect them.”

“We produce the seedlings and then supply them to the locals at no charge for them to plant in their manyattas,” said Rozin. Then, with careful management of the land and water-harvesting structures (swales or ditches dug on contours), water is fed directly into the plants.

The quality of the soil on the swales is improved by planting nitrogen-fixing plants such as beans, while the soil is watered and covered with mulch to prevent evaporation, thus remaining fertile.

One of the tree species being planted to create the food forests is Afzelia africana or African oak, the fruits of which are said to be rich in proteins and iron.  Its seed flour is used for baking. Another species is Moringa stenopetala, known locally as ‘mother’s helper’ because its fruit helps increase milk in lactating mothers and reduces malnutrition among infants.

“Residents here understand that their semi-nomadic life has to be slightly adjusted for survival,” noted George Obondo, coordinator of the NGO Coordination Board, who played a role in ensuring that Sadhana received 50,000 dollars from the U.N. Development Programme (UNDP) to jump start its Samburu project.

The money was used to set up a training centre with over 35 volunteers from various countries, including Haiti, to train locals and at the same time produce seedlings, and to build the green energy system for pumping water from the borehole it drilled.

“Things are changing,” said Obondo, “and Samburus know that their lifestyle needs to be altered and also tied to greater dependence on plant growing and not just livestock.” This is why the Sadhana Forest initiative is important, he added, because it is training people and giving them the knowledge and ability to create the resilience that they will need to avoid a harsh future.