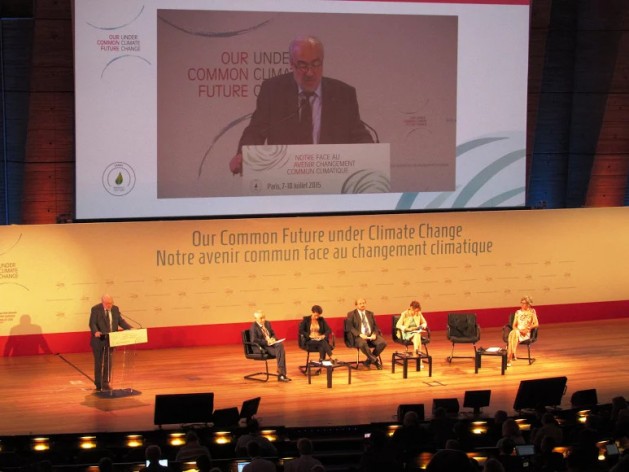 PARIS, Jul 7 2015 (IPS) - The cost of inaction is high when it comes to climate change and, so far, countries’ commitments to reduce greenhouse gas (GHG) emissions are not enough, says Michel Jarraud, Secretary-General of the World Meteorological Organisation (WMO).

In an exclusive interview with IPS during the “Our Common Future Under Climate Change” scientific conference being held in Paris (Jul. 7-10) at UNESCO headquarters, Jarraud said that “we need more ambitious commitments before getting to Paris” for the U.N. Climate Conference in December, adding that climate change should be included in the Sustainable Development Goals (SDGs) currently being worked out.

“Climate change is about much more than temperature,” he added.

Q:  Will this scientific meeting help to build the path towards a solid Conference of the Parties (COP21) agreement in Paris December? 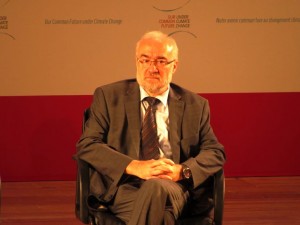 A:  Every six years the scientific community reviews the state of knowledge about climate and this is what we call the IPCC [Intergovernmental Panel on Climate Change] assessment report. The latest report was finalised a year ago, so in order to prepare for the next COP in Paris it was important to update it so that decision makers and negotiators have access to the very latest information. One of the roles of this conference is to get scientists together and also get a closer interaction between scientists and decision makers.

Q:  Do you think a Paris deal will be possible as a way of braking global warming?

A:  We have to look at it as a process. Many people remember Copenhagen in 2009 and say it was a failure but it was a place where the 2°C objective was set up. Every COP is going one step further in defining the objectives but also addressing solutions.

What is going to be decided in Paris is hopefully an ambitious plan to reduce significantly the emissions of GHGs and what will be reduced over the next 20, 30 and 40 years.

Countries were asked to pledge what they are willing to do and over which time scales. So far the pledges are not enough for 2°C but we hope this will accelerate. We can see countries are coming on board with significant commitment. We hope that in Paris we will be as close as possible to this objective. I am confident there will be progress.

“You cannot have any sustainable development if you don’t take into account climate damage” – Michel Jarraud, WMO Secretary-General

A:  At this stage the INDCs are not yet enough. He [Ban Ki-moon] says to member states that we need more ambitious commitment before Paris. We still have time, we still need to accelerate and go further. China has recently announced its commitment. If we don’t get enough in Paris to stand at 2°C, it means we will have to reduce [emissions] further and faster afterwards.

Q:  You have said there is an “adaptation gap”: In which way?

A:  There are two facets of the climate negotiations and one is what we call mitigation. It is important to reduce GHG emissions as much as possible and as fast as possible so that we minimise the amplitude of the climate change.

As a number of GHGs have already been in the atmosphere for a long time, it means we already committed to some amount of global warming. Therefore we need to adapt to the consequences such as sea level rise, impact on crops, on health and on extreme weather events.

Developed and developing countries don’t have the same financial, human and technical capacity to adapt. How can we bridge this gap by making sure there are appropriate technology transfer and financing mechanisms? This is one of the difficult parts of the negotiations. We need to address that as a priority.

Q:  Is the Green Climate Fund (GCF) enough to fill the finance gap?

A:  The fund has had a pledge of over 10 billion dollars. The objective by 2020 is to reach a funding stream of about 100 billion dollars per year. We are still in the early phase of that and hopefully in Paris there will be an acceleration towards identifying possible sources of financing.

The key is to see this finance not as an expense but as an investment. The cost of doing nothing will be more than acting. On a longer time scale, the cost of inaction is actually bigger, and we and maybe our children and grandchildren will have to pay more later.

Q:  What are the main concerns of scientists regarding the impacts of climate change worldwide?

A:  It is about much more than temperature. It impacts the hydrological cycle – for example, more precipitation in places where there is a lot already, less in places that are very dry. It will amplify this water cycle, so the regions that are already under water stress will have more droughts and heat waves and, vice-versa, there will be more floods in regions that already have too much water. There will be an impact on extreme weather events, like heat waves which are becoming more frequent and intense, and tropical cyclones and typhoons.

Q: Is there any particular region in the world about which climatologists are most concerned?

A:  Extreme events can set the clock of development back in several years. Sea level rise in small islands is a very big concern in the Indian Ocean, the Pacific and the Caribbean, as well as coastal areas. In countries with big deltas like the Nile or in Bangladesh, sea level rise will increase the vulnerability of these countries enormously.

Elsewhere, the risk of desertification will increase in several sub-Saharan regions, some parts of Latin America, Central Asia and around the Mediterranean basin. Many countries will be affected in different ways. Temperature is only part of the equation, because the increase of the 2°C will not be uniform. The warming will be higher over continents and oceans, it will be greater at higher altitudes.

One of the challenges is to translate this large-scale global scenario for regional and national levels. It is still a scientific challenge.

Q:  Should climate change be included in the Sustainable Development Goals (SDGs)?

A: You cannot have any sustainable development if you don’t take into account climate damage. What is being proposed right now for the SDGs is that climate is a factor that should be considered for almost all the individual proposed goals.

Q:  Is there a disconnection between science and policy-making when it comes to climate change?

A:  Yes, but less than there used to be. Decision-makers are taking the information provided by scientists more seriously. This is based on the fact that the scientific consensus is huge. There are still a few sceptics but essentially the scientific community is almost unanimous.

Most scientific questions have now a clear answer. Is climate changing? Yes, without any doubt. Is it due to human activities? Yes, with a probability of more than 95 percent. However there are still a few other questions that require more scientific research. The knowledge base is incredibly solid but we want to understand more and go even further.