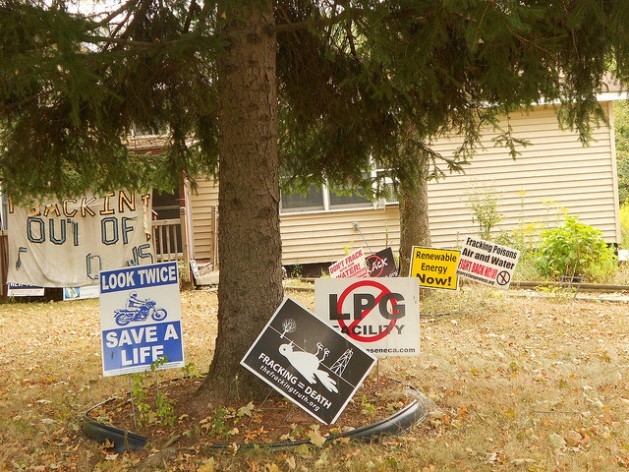 Activist Ray Kimble has turned his home in Dimock Township, Pennsylvania into a symbol of opposition to fracking. Credit: Emilio Godoy/IPS

MONTROSE, Pennsylvania, USA , Sep 17 2015 (IPS) - U.S. activist Vera Scroggins has been sued five times by the oil industry, and since October 2013 she has faced a restraining order banning her from any properties owned or leased by one of the biggest players in Pennsylvania’s natural gas rush, Cabot Oil & Gas Corporation.

“I feel like a half-citizen, because corporations can do whatever they want and citizens can’t. Corporations have broken environmental laws and keep working,” the retired real estate agent, who is a mother of three and grandmother of two, told IPS.

Since 2008 Scroggins, with the Shaleshock Media network of artists and media activists, has been fighting hydraulic fracturing or “fracking”, the technique used to produce shale gas, in the rural community of Montrose, Pennsylvania, population 1,600.

In Montrose, which is in Susquehanna County, there are some 1,100 wells in 600 gasfields, as well as 43 compressor stations, which help the transportation process of natural gas from one location to another.

“There is polluted water, flow-back water, the transformation of rural areas damaged by the operation of wells. There are quite a few long-term legal and financial liabilities to ensure that that legacy is properly addressed.” -- Tyson Slocum

This infrastructure, owned by seven companies, is near homes and schools.

The Marcellus shale formation stretches across the northeastern U.S. state of Pennsylvania. It is one of the large shale gas deposits that have led to the United States being dubbed “Frackistan”.

Fracking involves the massive pumping of water, chemicals and sand at high pressure into a well, which opens and extends fractures in the shale rock deep below the surface, to release the natural gas trapped there on a massive scale. The technique is considered damaging to health and the environment.

Fracking generates enormous volumes of liquid waste that must be treated for reuse, as well as emissions of methane, a greenhouse gas that is far more potent than carbon dioxide, the most important cause of global warming.

“The wells pollute the water and the methane escapes into the air. Many people don’t know what’s going on, they don’t have information. I don’t feel safe with how fracking has been done,” said Scroggins, who lives in Montrose with her husband, a retired teacher. There is a gas well just one kilometre from their home.

Fracking, with its tall steel drilling rigs, has modified the local landscape, along with the constant traffic of trucks hauling soil, sand and water.

Activists complain that the development of industry in rural areas like Montrose is ruining the countryside, while the accumulation of methane can lead to explosions or respiratory ailments among local residents. 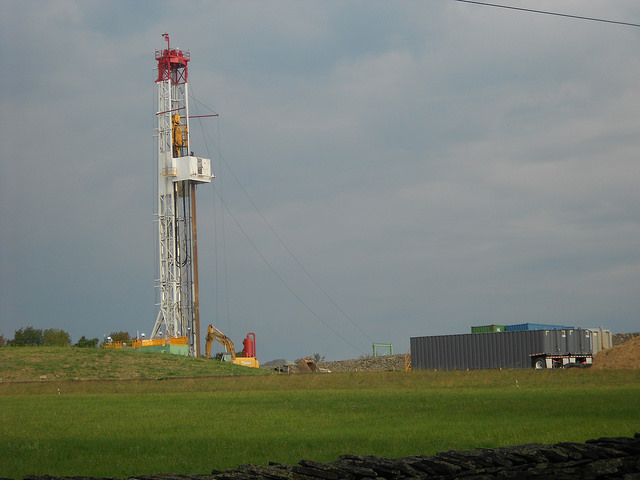 Shale drilling rig in Montrose, Pennsylvania. Many rural areas in this northeastern state have seen their lives disrupted by the development of shale gas and the controversial fracking technique used to produce it. Credit: Emilio Godoy/IPS

In its Annual Energy Outlook 2015, the U.S. Energy Information Administration (EIA) reported that about 11.34 trillion cubic feet of dry natural gas was produced directly from shale gas in the United States in 2013 – about 47 percent of total U.S. dry natural gas production that year.

And about 4.2 million barrels per day of crude oil were produced directly from shale oil or tight oil resources in the United States in 2014 – 49 percent of total U.S. crude oil production.

Oil is the main source of energy in the United States, accounting for 36 percent of the total, followed by natural gas (27 percent), and coal (19 percent).

In this state, the site of the first U.S. oil boom, 9,200 wells have been drilled, and over 16,000 permits for fracking have been granted.

The United States is the country that is most heavily exploiting shale gas and oil at a commercial level.

Fracking was given a boost in 2005, when the Energy Policy Act exempted the technique from seven major federal environmental laws, ranging from protecting clean water and air to preventing the release of toxic substances and chemicals into the environment.

With that backing, the industry unleashed a flood of lawsuits seeking to dismantle local and state environmental, health and contractual regulations adverse to its interests.

In the case of Pennsylvania, the state legislature approved the Oil and Gas Act (Act 13) in September 2012, which restricted local governments’ ability to zone and regulate natural gas drilling and required municipalities to allow oil and gas development in all zoning areas.

But city councils, local residents and environmental organisations fought the law, and in 2013 the Pennsylvania Supreme Court struck down sections of it, saying they were unconstitutional and violated citizens’ environmental rights. This allowed local communities to once again apply zoning rules in granting permits for shale gas production.

Along the side of the road, the traveller constantly sees signs reading Keep Pennsylvania Beautiful. But what is happening in rural areas does not seem to be in line with the slogan.

Ray Kimble, a 59-year-old mechanic, has experienced that contradiction in Dimock Township, where he lives. He told IPS that in his community, which is near Montrose, the water has been polluted since 2009 by drilling and fracking operations.

“They have damaged the town. We don’t want them here,” said Kimble, who added that he has a chronic cough and his ankles are swollen from contact with toxic waste while he worked for the industry as a driver.

Now he refuses to drink the tapwater and dedicates his time to carrying clean water to families affected by the contamination.

Dimock, population 1,500, was featured in the prize-winning documentary “Gasland” by U.S. filmmaker Josh Fox, which exposed the damage caused by fracking and helped spawn the first lawsuits against the shale gas industry, which were settled out of court.

Kimble’s house is just over 150 metres from a gas well.

“There are short-term profits with shale gas, but what happens when the wells dry up and the waste is left?” activist Tyson Slocum remarked to IPS.

“There is polluted water, flow-back water, the transformation of rural areas damaged by the operation of wells. There are quite a few long-term legal and financial liabilities to ensure that that legacy is properly addressed,” said Slocum, the director of the Energy Programme of Public Citizen, a consumer interest group that has provided advice to people affected by fracking.

The industry is now facing the sharp drop in international oil prices, the credit crunch, and growing public opposition to fracking.

In the last eight months, some 400 towns and cities in 28 states have adopted vetoes or moratoriums on fracking. The most far-reaching decisions were taken in the states of Vermont, the first to ban fracking, in 2012, and New York, which did so in December.

“Why don’t they build a well besides a politician’s home? Citizens don’t want them near our houses,” said Scroggins.

“I hope there won’t be a major leak, because it will be devastating. But the industry doesn’t acknowledge it has done something bad,” the activist added.

Slocum says the states have bowed to the industry’s interests. “The balance between profits and public health has been vilified, the debate on jobs and economic benefits is secondary,” he said.