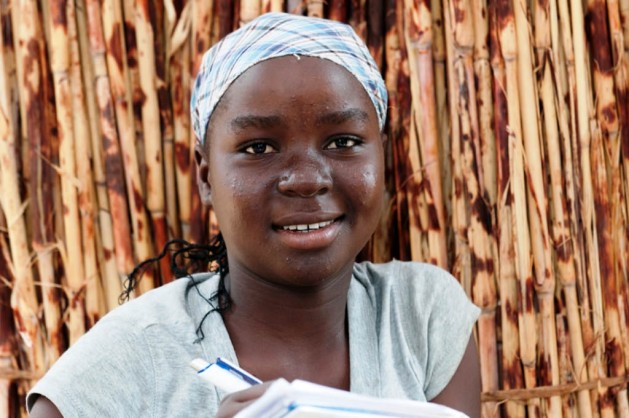 Bienvienue Taguieke, now 15, who refused to be sold into marriage when she was 12 for the equivalent of 8.5 dollars. Credit: Ngala Killian Chimtom/IPS

MAROUA, Cameroon, Jun 10 2015 (IPS) - Twelve-year-old Bienvienue Taguieke was expected to obey her parents and marry a man 40 years her senior, but an association of women in Cameroon’s Far North Region, where child marriages are rife, put a stop to it in a sign that women are starting to speaking out against the practice.

“I was a pupil at a government school in Guidimdaz, a village in the Mokolo area of the Far North Region when a man offered 5,000 CFA francs (around 8.50 dollars) to my mother for my hand in marriage. I refused and alerted some people including the headmistress of my school,” Bienvienue, now 15, told IPS.

Bienvienue believes her mother had considered the offer for economic reasons. “I think my mother wanted to sell me because of poverty. My father had died and there was nobody to pay my school fees and take care of us,” she says.

“My daughter will not suffer like me. I will do everything to keep her in school. I am appealing to government to outlaw early marriages, so that girls can go to school, and get married only after their studies” – 15-year-old Nabila who succeeded in escaping from her marital home

However, the school’s headmistress, Asta Djarmi, begged Bienvienue’s mother not to give her daughter away to a much older man. “The headmistress stopped the marriage arrangement my mother had initiated, then the people of ALDEPA, a local civic group campaigning against child marriages, intervened and repaid the 5,000 CFA franc “dowry” to this man. They are also the ones paying my school fees today,” says the grateful schoolgirl.

The 15-year-old says she dreamt of becoming a teacher, and that getting married as a child could have ended that dream. Now that she not had to do so has revived that dream.

Hers is not an isolated case of resistance in the region. Across the Far North Region, teenage girls are resisting what they consider a hurtful culture.  In neighbouring Zilling village, for example, 15-year-old Nabila succeeded in escaping from her marital home.

“I was forced by my parents into marrying an elderly man two years ago when I was only 13. I lived in the man’s house for 14 painful days. I felt as if an evil spirit was haunting me and I decided to run away,” the young girl recalled.

But those 14 days left her pregnant, and the teenager now raises the child by herself. Ironically, the man she was coerced to marry has now filed a court case against her, demanding that Nabila return to her marital home.

“I can’t do that,” she insists. “Not for anything in the world.” The premature marriage spoiled her chances of becoming the nurse she had wanted to be and now Nabila insists that she will never let her daughter go through the same trauma.

“My daughter will not suffer like me. I will do everything to keep her in school. I am appealing to government to outlaw early marriages, so that girls can go to school, and get married only after their studies.”

ALDEPA is now providing legal assistance to the teenage mother, and a senior official of the association, Henri Adjini, told IPS that it is currently paying the school fees of 87 teenagers rescued from early marriages.

Adjini said that forced marriages were part of the culture of the local Mafa and the Kapsiki tribes, explaining that parents marry off their daughters in exchange for dowry payments in the form of money, livestock or goods.

“The wish to strengthen family ties and friendships is very important for people here and they believe marrying off their daughters could do just that. Some other parents simply use their daughters to pay off their debts … the young woman’s choice hardly counts here,” he told IPS.

Marrying daughters off is an income-generating strategy in Cameroon, where almost one-third of the country’s 22 million people are poor, according to the United Nations.

In fact, according to the U.N. Population Fund (UNFPA), there is a relationship between early marriage and poverty in the Central African country, with 71 percent of child brides coming from poor households. Figures from the U.N. Children’s Fund (UNICEF) for 2014 show that 31 percent of teenage girls in the Far North Region fall prey to early marriages.

Cameroon’s Minister of Women’s Empowerment and the Family, Marie Therese Abena Ondoa has publicly condemned these marriages, saying that it is “immoral to sell out girls as if they were property.”

Child marriage is not unique to Cameroon, however. Many countries in the region and in the world face similar, or even worse case scenarios.

According to a 2013 UNFPA report, two out of five girls under the age of 18 are married in West and Central Africa. The worst culprit is Niger with 75 percent of child marriages – the highest rate in the world – followed by Chad with 72 percent and Guinea with 63 percent.

Like most governments in the region, Cameroon does little to protect these girls. The legal minimum age of marriage in Cameroon is only 15 years for girls, and 18 years for boys.  Even then, the legal requirement that marriage should only be contracted between two consenting partners is hardly enforced.

Minister Ondoua has helped launch advocacy campaigns and collaborated with NGOs, community and religious leaders in rural areas to educate the population, but she has not been able to convince government to raise the legal marriage age.

Nevertheless, the campaigns have been bearing fruit, with many girls saying “no” to family attempts to sell them off.

Girls like Abba Mairamou who resisted her father’s attempt to sell her off at the age of 12, are a living testimony to this success.

“I was only 12-years-old when my father pulled me out of primary school in 2004 to offer me to his friend as a wife. I refused and my father got angry and wanted to send me away from the house. I was desperate until I was, introduced to the association that fights against violence towards women in Maroua,” Abba says.

Abba formed the Association for the Autonomy and the Rights of Girls, known by its French acronym ‘APAD’, to sensitise teenage girls and parents in her Zokkok neighbourhood in Maroua against early marriages.

“We now offer shelter to many victims of forced marriages, and many girls are now standing up to that hurtful custom,” she beams.