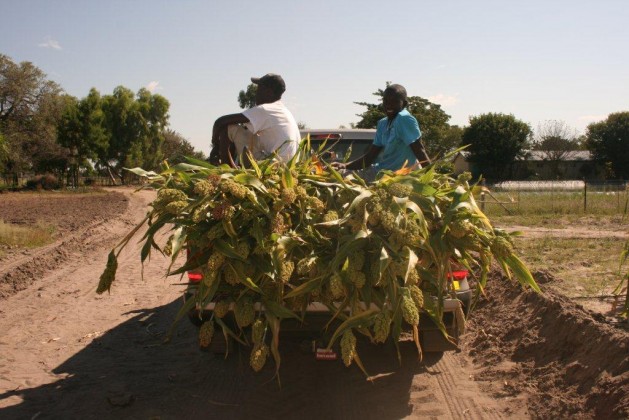 These Zimbabwean farmers with their harvested sorghum are at the mercy of climate change, while the government struggles with meagre financing and tall ambitions to take adequate action. Credit: UNDP-ALM

As it prepares for the U.N. Framework Convention on Climate Change (UNFCCC) Conference of the Parties (COP21), Zimbabwe – like many others in the global South – is grappling with radical climate shifts that have seen devastating exchanges of floods and droughts every year, and still awaits green bailout funds from developed nations, with officials here telling IPS, “this support should come in the forms of technology.”

The country’s halting progress on the climate front is being blamed by local climate researchers on the country’s failure to invest in state-of-the-art climate monitoring technology. More still needs to be done as the country heads to Paris, says Sherpard Zvigadza, Programmes Manager, Climate Change and Energy, for the Harare-based ZERO Regional Environment Organisation (ZERO).

"The country [Zimbabwe] needs to partner with those in the private sector who are making an effort to develop projects or reduce their footprint, and implement a reward-based strategy so that both individuals and corporates are encouraged to support the government’s policies" – Steve Wentzel, director of Carbon Green Africa

These concerns arise from what is seen here as repeated failure by the poorly-funded Meteorological Services Department to adequately monitor climate patterns and put in place effective early warning systems for disaster preparedness.

However, these constraints have not stopped Zimbabwe, which for the past two decades has seen a wilting of international financial support for crafting ambitious climate change interventions.

Recurrent climate-induced disasters have shown that this not the time to treat anything as “business as usual”, says Elisha Moyo, principal climate change researcher in the Climate Change Management Department of the Ministry of Environment, Water and Climate.

And these efforts have brought together civic society organisations (CSOs), farmers and ordinary Zimbabweans in what is expected to shape the country’s negotiations in Paris.

CSOs point to the fact that Zimbabwe has been identified by GLOBE International, which brings together legislators from all over the world, as having on the most comprehensive environmental laws in southern Africa, and say that this should be a stimulus for helping the country make greater strides in climate governance.

However, as tall as these ambitions sound, the climate ministry has acknowledged that in the absence of adequate financing the country could still be far from meeting its United Nations Framework Convention on Climate Change (UNFCC) commitments.

“There is a need to expand current projects as well as develop new projects throughout the country for the country to position itself to be able to raise funding for these developments,” said Steve Wentzel, director of Carbon Green Africa, a Zimbabwe-based company established to facilitate the generation of carbon credits through validating Reducing Emissions from Deforestation and Forest Degradation (REDD) projects.

“The country needs to partner with those in the private sector who are making an effort to develop projects or reduce their footprint, and implement a reward-based strategy so that both individuals and corporates are encouraged to support the government’s policies,” Wentzel told IPS.

“If the country is serious about moving away from business as usual, awareness raising is key for all stakeholders, including the general population as well as industry,” Zvigadza told IPS. “A vigorous campaign is needed across the country. More importantly, Zimbabwe’s national climate change response strategy has to be operationalised so that the challenges are addressed according to different local circumstances.”

Yet, by the climate ministry’s own admission, progress has remained slow due to the continuing problem of lack of funds, which Moyo believes should be tapped from the richer nations.

“As Africa, and supported by other developing countries from other regions, we believe the rich countries have not yet shouldered a fair share of the burden and should lead by example, in terms of cutting emissions and also providing financial support to poorer nations as stated in the Climate Change Convention,” Moyo told IPS.

And Zimbabwe certainly does need the money. The climate ministry is already wallowing in reduced state funding after the Finance Ministry slashed its national budget from 93 million dollars in 2014 to 52 million this year.

Meanwhile, domestic economic considerations are one of the obstacles to implementation of the country’s troubled climate change policy. Despite seeking to promote clean energy, power generation is still largely fossil fuel-based, where instead of cutting emissions, relatively cheaper coal feeds power generation.

The climate ministry policy brief says the country needs to “reduce greenhouse gas emissions from energy production transmission and use”, but economic hardships have made this a tall order where millions also rely on highly-polluting firewood for fuel.

“We are compiling the “intended nationally determined contributions (INDCs) and have been conducting consultations and data collection around the country especially with reference to the energy sector, which has a high potential of emission reductions through adoption of
renewable energy wherever possible,” Moyo told IPS.

INDCS are the post-2020 climate actions that countries say they will take under a new international agreement to be reached at COP21 in Paris, and to be submitted to the United Nations by September.

For its climate change ambitions to succeed, Zimbabwe must go back to the grassroots, says Wentzel, but unfortunately “there is a lack of knowledge of climate changes issues,” he told IPS.

As Washington Zhakata, Zimbabwe’s lead climate change negotiator put it: “The road to the Paris summit remains unclear with many stumbling blocks on the road.”