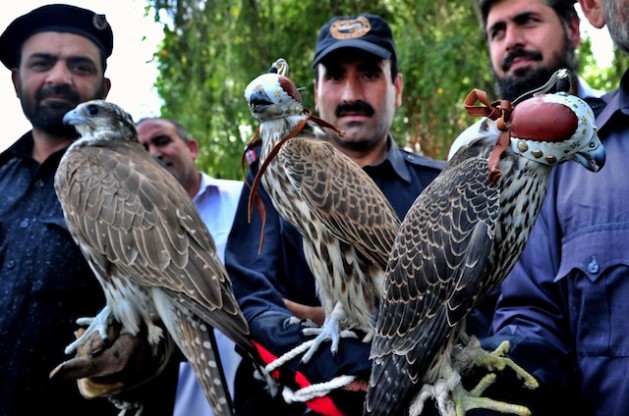 PESHAWAR, Apr 2 2013 (IPS) - While the Taliban’s military activities continue to plague Pakistan’s northern Federally Administered Tribal Areas (FATA), the incessant violence has been a blessing in disguise for one creature: the falcon.

Declared endangered by the Union for the Conservation of Nature, this bird of prey suffered for years at the hands of poachers and hunters, whose unfettered access to FATA and the adjacent Khyber Pakhtunkhwa (KP) province guaranteed the birds a short life span in the wild, with most destined to be trapped, killed or sold.

But “continued militancy has kept the poachers (and hunters) away,” Khalid Shah, an official at the KP Wildlife Department, told IPS, adding that the survival rate of falcons and some other migratory birds has “increased tremendously”.

Experts trace this population growth to the beginning of the insurgency here, which began after the 2001 U.S.-led invasion of Afghanistan toppled the government in Kabul and sent scores of Taliban and Al Qaeda members across the border into Pakistan’s sprawling mountainous terrain.

Being the U.S. ’s ally in the so-called “war on terror”, the Pakistan army has engaged in a military offensive to root out the insurgents, believed to be scattered across all seven districts that comprise FATA.

Under fire from both sides, civilian residents say militancy has made daily activities – among them hunting and poaching — impossible.

Falcons begin arriving in Pakistan from Siberia, China, Russia and Afghanistan during the months of August and September and either take up residence in desert landscapes, or nest in the foothills of arid regions.

In FATA the birds find a ready supply of food in the form of “reptiles, mammals, insects and small birds”, while thickly-forested parts of the tribal areas offer a safe and natural habitat, wild conservationist Ali Murad told IPS.

Besides playing host to migratory guests, the region is also home to several indigenous falcon species. In total, Pakistan boasts 10 falcon species at the height of the migration season. 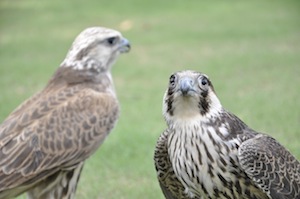 The number of falcons in northern Pakistan has increased from 2,000 to 8,000 since the onset of militancy. Credit: Ashfaq Yusufzai/IPS

Arab nationals use the birds – particularly the females — for falconry, especially for hunting houbara bustard in Pakistan and other countries.

“Dignitaries from Arab countries visit the KP and FATA to purchase the falcon of their choice from a market fed by hundreds of trappers,” Fareed Khan, a falcon dealer, told IPS.

Falcon trappers attach balls of nylon and feathers to the feet of smaller birds like kestrels, Laggar Falcons and white-eyed buzzard. Mistaking these contraptions for prey, larger falcons sink their talons into the “bait”, causing both birds to tumble to the ground and into the hands of the waiting trappers, Khan elaborated.

Sometimes, small birds like doves, pigeons and quails are placed as bait underneath nets on the ground. When the falcons swoop down on their prey they become entangled in the nets and are easily captured.

The large-scale trapping, hunting and dealing of falcons was in full swing when the Convention on International Trade in Endangered Species of Wild Fauna and Flora (CITES) declared the bird an endangered species in 2005, prompting the government to place a complete ban on issuance of licences to those who would interrupt the bird’s natural life.

Those licences had brought the government about 12,000 dollars annually.

Prior to the advent of terrorism, “hunters continued illegal poaching in KP and earned thousands of dollars from the sale of falcons to well-heeled Arabs”, Murad said.

“Now,” according to KP official Khalid Shah, “military activity, gunfire, the use of tanks and other kinds of warfare” have made FATA and the KP virtually too dangerous to enter.

For wildlife enthusiasts and environmentalists who have long fought against the relentless killing and capture of the birds, this is a bittersweet victory, as it comes at the expense of peace in Pakistan ’s tribal areas.

Wildlife officials, in “collaboration with the KP Forest Department, are working on habitat improvement for falcons to further encourage” population growth, Shah said.

The government is also working to implement its ban by imposing harsh penalties on those who violate the law.

“The government has issued over 450 challans (orders for payment of fines) in the last five years, bringing in revenue worth roughly 3,000 dollars,” Wildlife Department Spokesperson Kashifullah Shah told IPS.

In March alone, seven falcons have been confiscated and released. An additional 20 falcons were confiscated in January and February of 2013 and released into the wild, he said.

Kashifullah Shah says a shortage of staff and a dearth of adequate facilities have hampered efforts to bring about the desired results.

The population could be raised much more if stronger measures are taken, he stressed.

With a going rate of between one and ten million rupees (10,000 and 100,000 dollars), falcons are prized trophies, and neither militancy nor a government ban will be sufficient to keep hunters and trappers at bay forever.

“Only 450 field workers are not enough to stop illegal hunting and smuggling of falcons in the province, (especially) since each of the workers is required to monitor an area of 200 square kilometres on foot, while the trappers have (modern equipment) and vehicles.”

“We need to deploy more staff with vehicles in potential hunting areas where hundreds of trappers are active, like Swat, Peshawar and Dera Ismail Khan to conserve the species,” he said.

“We should also involve local communities by establishing village conservation committees to keep an eye on the hunters. This strategy has worked well in the past.”

This programme also helps scale up public awareness about the endangered creature and the importance of preserving its natural habitat.