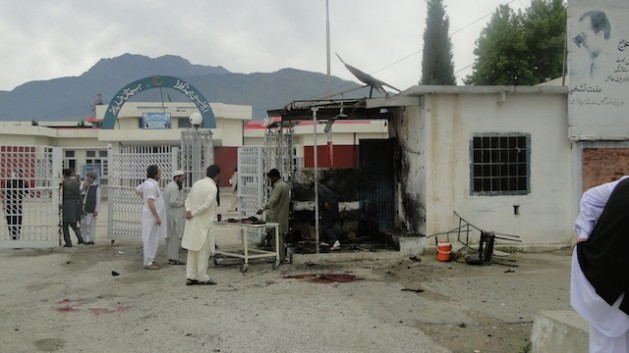 PESHAWAR, May 1 2013 (IPS) - Akbar Shah was sitting with his sick wife in the gynaecology ward of the Agency Headquarters Hospital in Bajaur Agency, a division of northern Pakistan’s Federally Administered Tribal Areas (FATA), when a bomb ripped through the facility, scattering patients, doctors and medical supplies.

“We immediately rushed my wife to Peshawar (capital of the neighbouring Khyber Pakhtunkhwa province) because the doctors, paramedics and nurses were panicked and unable to look after patients,” Shah told IPS.

"The Taliban are just inviting the wrath of God Almighty by targeting healthcare facilities...The patients should be shown mercy."
Shah’s wife is now being treated in a hospital in Peshawar and though her condition is showing signs of improvement, Shah still curses the Taliban for its ruthless campaign against health facilities in the region.

The entire medical community, along with a large majority of the general public, has slammed this latest attack, which killed four people, as a plot to deprive FATA’s population of six million people of adequate healthcare.

According to Dr. Shaukat Ali at the FATA Health Directorate, the 200-bed Agency Headquarters Hospital (AHH) had provided treatment to over 100,000 patients annually, with the help of 120 doctors and 100 paramedics.

“It is the only specialised hospital in FATA,” he told IPS, but it is now devoid of both patients and doctors, who have fled to Peshawar.

With 26 hospitals, 10 rural health centres and 419 community health centres, FATA is well equipped to deal with all of its residents’ medical needs. But if the attacks do not stop immediately, Shaukat Ali warned, the entire health system here will be rendered ineffective.

Meanwhile, medical facilities in Peshawar are struggling to keep pace with the influx of patients from tribal areas on the Afghanistan border, who say they are “too afraid” to visit hospitals that might be targeted by militants.

Dr Ahmad Sher at the Khyber Teaching Hospital in Peshawar told IPS his facility received about 20,000 patients from FATA in 2012 alone.

“The Taliban are just inviting the wrath of God Almighty by targeting healthcare facilities where patients are treated for different ailments. The patients should be shown mercy,” he said.

So far the Taliban have destroyed about 400 health facilities in FATA and the Khyber Pakhtunkwa (KP) province.

“Since 2008, the Taliban militants have damaged 128 health facilities in FATA,” Secretary of the Provincial Doctors Association (PDA) Dr. Muhammad Irfan told IPS, while the adjacent KP lost 55 health facilities between 2007 and 2009, during the Taliban’s illegal rule over the Swat district.

Militants have been particularly unforgiving of those who defy the so-called “ban” on polio immunisation, which they have labeled “un-Islamic”. The group also claims the oral polio vaccine (OPV) was designed to render the recipients impotent and infertile in order to “curb” population growth of Muslims.

In the past three months the Taliban have claimed responsibility for the deaths of 17 policemen, female vaccinators and volunteers in polio-related violence.

Last year, out of a total of 58 cases of polio in the country, 27 were recorded in the KP and 20 in FATA, which experts believe is likely the result of the Taliban’s interference with immunisation drives.

Fathema Murtaza, Pakistan spokeswoman for Doctors Without Borders (known by its French acronym MSF) told IPS it is crucial that medical structures and patients be spared from violence.

“MSF…calls for respect for the safety and security of patients, health facilities, and medical staff,” the group said in a press release last week. “All actors in the area must ensure that medical activities can take place unhindered and not be targeted.”

Since March, MSF medical teams have been running mobile clinics in Bajaur, providing services in three Basic Healthcare Units (BHUs) where about 200 patients are treated every week, Murtaza said.

“The safety and security of healthcare is essential for MSF to continue to expand its medical intervention in Bajaur,” she added.

The PDA’s Dr. Muhammad Irfan condemned the Taliban and asked the government to tighten security on hospitals so patients can receive necessary treatment undisturbed.

“We will hire private security guards and will impart training to our watchmen and other staff on how to foil terror (plots),” FATA’s director of health, Dr. Fawad Khan, informed IPS.

In that same vein, the female staff of government-run hospitals will be trained on how to conduct body searches of female visitors and take appropriate measures if they encounter anything suspicious.

The health directorate has also sought the services of the KP police in the training of health personnel.

Like other experts and medical professionals here, Khan believes the targeting of health facilities is particularly egregious in a region that is already lagging behind global health indicators, particularly with regards to maternal mortality.

“About 365 women (per 100,000 live births) die every year in Pakistan’s four provinces, while in FATA the number is closer to 400 due to pregnancy-related complications,” he said.

Similarly, FATA only has a 40 percent immunisation rate, compared to a nationwide rate of 67 percent.

A majority of FATA’s 400 qualified doctors are too afraid to go to work because of the dangers that loom over them every day, he added.