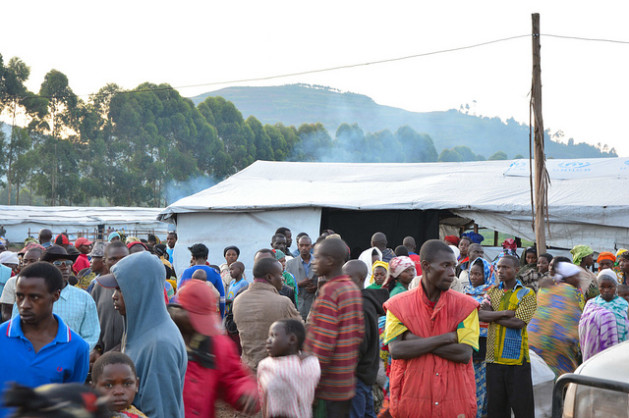 GOMA, DR Congo , Jun 21 2013 (IPS) - Tuyisenge*, a former teacher from the Democratic Republic of Congo province of North Kivu, sat on a tree stump watching his fellow refugees go about their lives along the terraces of the hillside Kigeme Refugee Camp in southern Rwanda.

He is one of some 14,000 Congolese refugees living at the camp.

“I decided to flee after my wife and two daughters were raped by the army before my eyes,” he told IPS, his voice choking with sobs.

Ngutuye, 33, lies on a mat in front of her tent. She also fled North Kivu province in eastern DRC, in April 2012, after her civilian husband was killed in the crossfire between the Congolese army and the M23 rebels.

A 20-year cycle of violence in eastern DRC has forced hundreds of thousands of people to seek refuge beyond this Central African country’s borders.

Since April 2012, fighting in North Kivu province has displaced some 2.2 million people and caused almost 70,000 to flee to neighbouring Uganda and Rwanda, according to the United Nations Refugee Agency (UNHCR). Of these refugees, 24,123 fled to Rwanda.

According to the Rwandan government, this has added to the existing population of 43,000 refugees in the country, 99 percent of whom are Congolese.

The majority of these refugees live in the four Rwandan camps of Kigeme, Gihembe, Kiziba and Nyabiheke. A few urban refugees also live in Kigali, the Rwandan capital.

But the 2012 exodus is just the latest in a mass displacement of Congolese that began almost two decades ago. It first started in March 1993 when thousands fled the DRC after violent ethnic clashes erupted in Ntoto, North Kivu, and spread to rural areas in South Kivu province.

The second group of Congolese refugees, who were mostly Tutsis, left the DRC in 1994 upon the arrival of some 1.2 million Rwandan Hutus in the country after the Rwandan genocide, when an estimated 800,000 people, mainly minority Tutsis, were killed by Hutus in 100 days.

More people fled the DRC during the First Congo War, from 1996 to 1997, when Rwanda invaded the Central African nation to oust then President Mobutu Sese Seko (1965-1997).

A year later, the Second Congo War began and more Congolese fled the country from 1998 to 2003. According to World Genocide Watch, an international NGO that works to protect people from genocide, more than 5.4 million people died in the two Congo wars.

But returning Congolese refugees to their homes remains a pressing issue. It is a topic that lies at the heart of a number of negotiations and agreements between the Congolese government and rebels in eastern DRC.

On Mar. 6 Ugandan Defence Minister Crispus Kiyonga, who is also chair of the Kampala negotiations between the Congolese government and the M23 rebels, said the repatriation of refugees based in Rwanda had not been effective.

Others in the DRC agree. “The return of refugees based in Rwanda has always been a touchy issue,” Emmanuel Kamanzi, a Tutsi community leader in Goma, told IPS.

Kamanzi believes that local communities in the DRC are afraid that if Congolese Tutsi refugees return from Rwanda, it will create competition for land. In 2010, Masti Nots, the head of the North Kivu UNHCR office, predicted that “the land issue will be one of the main obstacles to the return of refugees.”

Jean-Claude Chito, a lawyer at the Justice and Peace Commission of the Catholic Diocese of Goma, concurred.

“The ambiguities of the 1973 Land Act are the source of land conflicts in the DRC,” he told IPS.

The situation is further complicated by a stipulation that allows any individual in the rebel-held area in eastern DRC to obtain a title deed. It has resulted in an influx of people to these areas and created a competition for land with local communities.

But Bahati Kahembe, one of the four traditional chiefs appointed to the provincial assembly in North Kivu, told IPS: “That is not true.”

It seems however that for now, authorities do not have to worry about the competition for land, because the refugees are not returning.

Simplice Kpanji, the communications director at the UNHCR regional office in Kinshasa, the DRC capital, told IPS “the security situation is not favourable for the repatriation of (Congolese) refugees.”