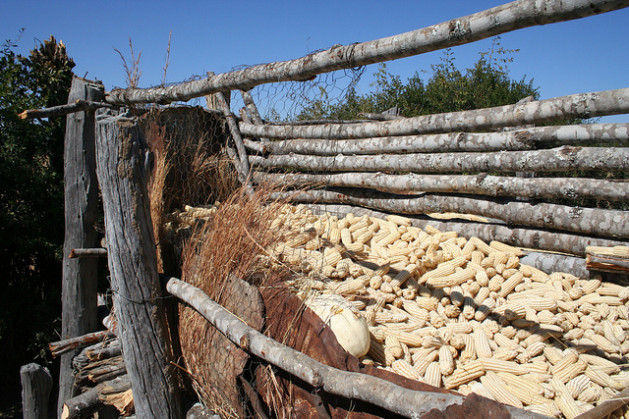 Granaries are half empty for farmers in southern Zimbabwe, and the country is importing maize to make up for a shortfall of at least two million tonnes. Credit: Busani Bafana/IPS

NKAYI, Zimbabwe, Jun 14 2013 (IPS) - For the past five years, farmer Melusi Mhlanga has spent nearly 200 dollars each season for inputs, but the maize yields have not matched his investment.

“With good rains I have been able to get more than 20 bags from my two hectare field but now I barely manage 10 bags,” says Mhlanga, who spoke to IPS at his homestead where he has diversified into livestock breeding.

"Our maize projections for the 2012/13 season are below three million tonnes, yet our national need is at 1.8 million tonnes." -- Economic Analyst Eric Bloch

“Good rains are important for farmers but so is knowhow, which has been a challenge for me, and I decided to focus more on cattle breeding and running a business than on growing crops.”

Mhlanga operates a general store, a bottle store and a grinding mill, which he says are the new sources of income for him and his family since the maize failed. He now grows sorghum and millet for subsistence.

However, state investment in Zimbabwe’s agriculture has been hijacked by political priorities at the expense of long-term food and economic gains. Once the top contributor to GDP, farming is now second to mining. Tobacco is still the main agricultural export.

At the core of Zimbabwe’s agriculture success is its main asset – land. Reforms availed more land to more people.

But without investment, there is no cheap finance to buy equipment and inputs, and no adequately financed and resourced extension services.

“Agriculture and land has become a political football between the main national parties, and with the donors,” Ian Scoones, an agricultural ecologist and professorial fellow at the Institute of Development Studies at the University of Sussex, UK who has extensively researched Zimbabwe’s agricultural sector, told IPS.

“Neither ZANU PF [Zimbabwe’s ruling party] nor the MDC [the leading opposition party] have a coherent agricultural and rural development policy. Neither has thought through the implications of land reform.”

Scoones, co-author of the critically acclaimed book “Zimbabwe’s Land Reform: Myths and Realities”, explains that historically, Zimbabwe has invested massively in agriculture – in the pre-Independence period with the focus on building white commercial farming, and the period immediately post-Independence smallholder farmers in the communal areas.

“Since 2000, the land reform programme took precedence, and, for a period, agricultural investment was run directly by the Reserve Bank of Zimbabwe,” said Scoones. “Much of this spending was inappropriate, corrupt and so poorly focused. Since 2009, with the stabilisation of the economy, there has been some limited investment, but not enough.”

Economic analyst Eric Bloch said Zimbabwe can restore its agricultural fortunes but first needs to tackle its external debt burden, convert current offer letters on land to transferable leases, and clarify the implementation of the Indigenisation Act, which is precluding potential investors.

“We are in a food insecurity situation as we are still dependent on international food aid and maize imports,” Bloch told IPS. “Our maize projections for the 2012-13 season are below three million tonnes, yet our national need is at 1.8 million tonnes. That is why we are importing 1.5 million tonnes from Zambia and other countries.”

The World Food Programme estimates that up to 1.6 million Zimbabweans will need food aid after a poor harvest by smallholder farmers who contribute about 50 percent of the national maize crop.

“The only times that the government has put a lot of resources into agriculture is during election years for obvious reasons,” agricultural economist and farmer Peter Gambara told IPS.

Unveiling Zimbabwe’s 2013 budget, Finance Minister Tendai Biti projected that agriculture will grow by 4.6 percent, up from a negative 5.8 percent in tumultuous 2008.