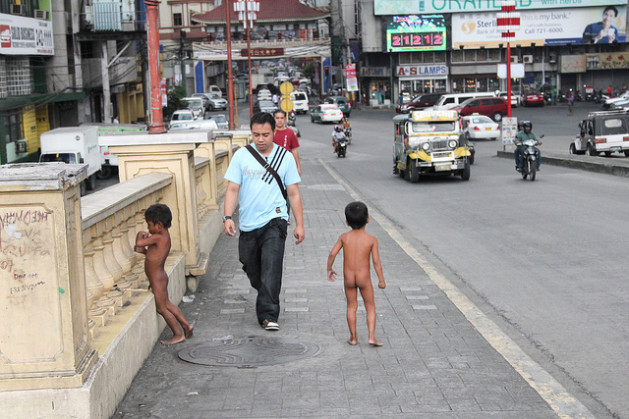 Poor children in Manila. Political patronage often influences how local development aid is spent in the Philippines and other countries. Credit: Jessica Huang-La

UNITED NATIONS, Jul 31 2013 (IPS) - Despite global efforts to provide development aid, the world’s poorest are getting poorer, says a new report by the Catholic Agency for Overseas Development (CAFOD).

“What we found through the research with people living in poverty is that overall, the most marginalised and the poorest communities have experienced greater exclusion from development processes,” Neva Frecheville, CAFOD’s post-MDGs policy analyst, told IPS.

Several factors beyond the control of poor communities, such as government corruption, natural disasters and economic barriers, have exacerbated or displaced many poor people’s livelihoods, according to the report, “Setting the post-2015 development compass: voices from the ground,” a part of the agency’s COMPASS 2015 research project.

The participatory research interviewed 1,420 people in 56 communities living with poverty in Uganda, Bolivia, the Philippines and Zimbabwe.

Poverty is a complex issue driven by many power dynamics that pose challenges for development aid to operate properly and reach the people it needs to reach, Frecheville told IPS.

Government corruption and political patronage, which means that communities are punished or rewarded for their support of a specific political group, are one case of exclusion from the benefits of services and resources meant to reach the poor, Frecheville explained.

“If you do not belong to the same political party as the incumbent local government chief executive, it is very difficult to get support for development projects,” said Mapulog of Philippines, who was interviewed for the CAFOD report.

Other issues present themselves as barriers to people trying to access the full benefits of development aid, such as education.

“Education is one instance where particularly under the MDGs, focus on enrollment over quality has meant that people have been sending their children to school, a major investment for them, but haven’t had the benefit of quality education,” Frecheville said.

“This process has further entrenched their poverty and limited their options again that they have in the future.”

Not all findings from the report were negative indicators of poverty, however.

The report found communities with significant improvements on changing discriminatory norms, such as increased political participation for indigenous people and government policies with reduced stigma attached to being HIV-positive.

“Sometimes, we face discrimination. When someone knows that you are HIV-positive, they avoid your stall and buy from the next person, as if HIV is transmitted through the products that we sell. [But] cases of discrimination are few now, people are now aware,” said Rosemary from Bulawayo, Zimbabwe, in her interview for the CAFOD report.

The CAFOD report is part of the Participate initiative, which aims to bring evidence on the reality of poverty from the ground level and make suggestions for the post-2015 development agenda, when the MDGs expire.

Thea Shahrokh, research officer of Participate, noted that the global research initiative “connects the unfiltered voices of those most affected by poverty and exclusion with the U.N. and intergovernmental deliberations.”

The findings of the report also reflect the major policy areas that need to be addressed – such as prioritising conflict prevention, disaster and conflict risk reduction and promoting the creation of decent jobs – by policymakers at multiple levels.

“While the negotiations for the post-2015 global development agenda are held by the U.N., a complex process involving many different actors, such as the multilateral institutions, the private sector, and various U.N. agencies, are engaging at multiple levels from local to national, regional and beyond,” Sharokh told IPS.

By making heard the voices of those who are meant to benefit from global aid, the participatory research is “incredibly important” in its contributions to the post-2015 debate, Frecheville told IPS.

“[The report] enables the people to really define and articulate how they understand their own situations and their aspirations for what they want in the future,” Frecheville said. “Too often, that’s something that can be externally determined, particularly in global policy processes.”