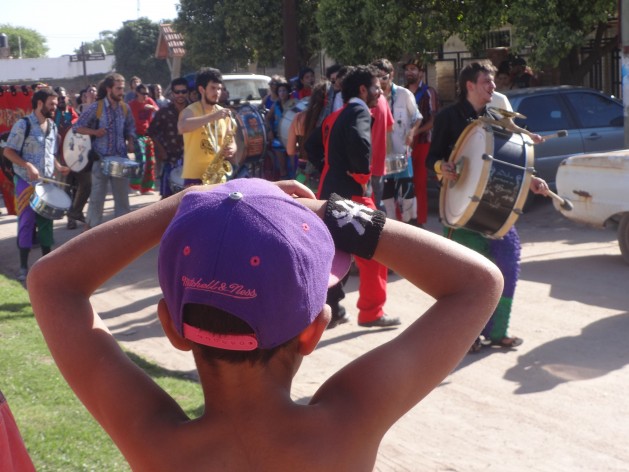 A boy watches a protest against Monsanto in the central Argentine town of Malvinas Argentinas. Credit: Fabiana Frayssinet/IPS

BUENOS AIRES, May 20 2014 (IPS) - The advertising department of Swiss agribusiness giant Syngenta was on a roll in early 2004 when it published a map that dubbed a large area of Argentina, Brazil, Bolivia, Paraguay and Uruguay the “United Republic of Soy”.

In this “republic” more than 46 million hectares of transgenic soy are sprayed with 600 million litres of the herbicide glyphosate and are largely responsible for the deforestation of 500,000 hectares a year in the past decade, according to estimates by the international non-profit organisation GRAIN.

The expansion of agricultural biotechnology in South America has occurred under governments described as progressive, and has fuelled a debate between those who see it as scientific and economic progress and those who stress the social, environmental and political damage caused.

According to GRAIN, global biotech corporations stepped up their campaign to spread transgenic or genetically modified (GM) seeds in 2012, when most of the Southern Cone countries had governments that were critical of neoliberal policies and that were in favour of a state that played a strong role with respect to social, educational, health and economic questions.

- Argentina – 2010: 3 percent of producers controlled over 50 percent of soybean production.

The two agricultural powerhouses in the region, Argentina and Brazil, are now among the world’s leaders in GM crops, which require large amounts of pesticides and herbicides.

This has to do with “the blind belief among progressive sectors in scientific and technological advances as providers of well-being and progress,” GRAIN Latin America spokesman Carlos Vicente told Tierramérica.

“The corporate power behind GM crops is not questioned, and the socioenvironmental impacts are not analysed,” he said.

There is also an element of “pragmatism,” he said, referring to “the alliance with agribusiness to maintain governability,” especially in Argentina, where taxes on the enormous exports of soy “are a major source of revenue for the state,” Vicente said.

Paradoxically, these earnings help finance “the social programmes that provide assistance to those who are expelled by the agribusiness model,” added the spokesman for GRAIN, an international NGO that promotes food security and works to support small farmers and social movements in their struggles for community-controlled and biodiversity-based food systems.

In Argentina, the U.S. biotech corporation Monsanto controls 86 percent of the market for transgenic seeds, and is the company that generates the most noise. But others are quietly advancing, like Syngenta, Raúl Montenegro, the head of the Environmental Defence Foundation (FUNAM), told Tierramérica.

In his view, the struggle against the construction of a plant to process transgenic corn seed in Malvinas Argentinas, a poor community east of the capital of the central Argentine province of Córdoba, prompted other corporations to keep a low profile and “avoid announcing the location of their future installations.”

On the list, Vicente includes other companies that control millions of hectares, such as Germany’s Bayer and BASF, the U.S. Cargill, Switzerland’s Nestlé, and the Argentina-based Bunge.

Argentina: By 2007 the agribusiness model had expelled more than 200,000 farmers and their families from the land.

Paraguay: The push by big soy producers to control 4 million hectares of land has displaced 143,000 peasant families - more than half the farms under 20 hectares recorded in the agricultural census of 1991.

Syngenta did not respond to Tierramérica’s request for an interview. But its communiqués are clear enough.

In a statement on its 2013 fiscal results that says Latin America is spearheading Syngenta’s growth, the company stressed that its 14.68 billion dollars in revenue were driven by seven percent growth in Latin America and six percent growth in Europe, Africa, the Middle East and the Asia-Pacific region. In North America, meanwhile, sales fell two percent.

These corporations make their profits at the cost of an increase in health and environmental problems caused by pesticides, the displacement of small farmers and indigenous people, and the growing concentration of property ownership, said Vicente.

But, he added, these are only seen as “collateral damage” by the governments of “the United Republic of Soy.”

In Argentina, President Cristina Fernández and her ministers “repeat ad nauseam that ‘we produce food for 400 million people’ when what we actually produce are 55 million tonnes of soy bean forage,” he added.

Enrique Martínez, former president of the National Institute of Industrial Technology (INTI), reminded Tierramérica of Monsanto’s lobbying for a law on seeds “that would validate not only patents on species but also the charging of royalties and the regulation of ownership of harvested seeds.”

Martínez, head of the Evita Movement’s Institute for Popular Production, said he believes the law won’t be approved, due to the pressure of public opinion.

In his opinion, the government does not defend an agricultural model based on transgenics. “What it does is argue that the market works well in automatic terms, based on the supposition that productivity improves in a systematic manner, and that this benefits the community,” he said.

But that logic “is not correct,” he said. “We need studies that show that Monsanto has appropriated the majority of the immediate economic benefits, turning farmers into simple hostages of this scheme.”

He added, however, that “biotechnology should not be reviled as the cause of our problems.

“That is a sectarian way of looking at things,” he said. What is needed, he argued, is “the democratisation of knowledge and know-how, to enable an expansion of the actors so that production is not concentrated in fewer and fewer hands.”

Environmental questions “are only one aspect,” he said. “The key is the construction of value chains that depend on the decisions of a corporation. That is what must be fixed.”

Economist João Pedro Stédile, a leader of the La Vía Campesina global peasant movement and Brazil’s Landless Rural Workers Movement (MST), said the phenomenon did not reflect an ideological contradiction on the part of progressive governments.

“The movement of capital over agriculture to impose a dominant model based on monoculture, transgenic seeds and toxic agrochemicals has its own logic that does not depend on governments,” Stédile told Tierramérica.

Governments “fool themselves” because of the volume of production and the positive trade balance that this agribusiness model provides, but it does not generate development or distribute wealth, he argued.

Of the 70 million hectares of land under cultivation in Brazil, 88 percent is dedicated to soy, maize, sugar cane and eucalyptus, he pointed out. “So naturally social problems and protests against that model without a future are going to increase,” Stédile said.

And biotech companies know that.

The vice president of Monsanto Argentina, Pablo Vaquero, warned in March that the conflict that has blocked construction of a plant near the city of Córdoba in central Argentina “is a threat to the entire productive model.”

“Today they come out against Monsanto, but it is an excuse to attack the entire sector,” he said.

Vicente says a broad debate on these issues is still needed.

But he stressed achievements such as the blocking of the seeds law in Argentina, restrictions on spraying in some municipalities, and the awareness raised by the National Campaign Against Agrotoxics and for Life.