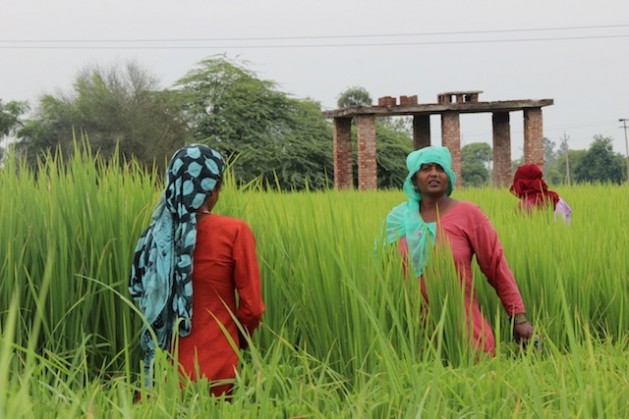 In India, most farmers are smallholders or landless peasants who will need to adapt to 'Climate-Smart Agriculture' in order to survive changing weather patterns. Credit: Manipadma Jena/IPS

Launching the Global Alliance for Climate-Smart Agriculture (CSA) represents yet another concerted attempt to meet the world’s 60-percent higher food requirement over the next 35 years, according to the Food and Agriculture Organisation (FAO).

The Alliance will come not a day too soon. The latest Asian Development Bank report says that if no action is taken to prevent the earth heating up by two degree Celsius by 2030, South Asia – one of the most vulnerable regions to climate change and home to 1.5 billion people, a third of whom still live in poverty – will see its annual economy shrink by up to 1.8 percent every year by 2050 and up to 8.8 percent by 2100.

“Today climate holds nine out of ten cards determining whether all your labour will come to naught or whether a farmer will reap some harvest.” -- Iswar Dayal, a farmer in Birnarayana village in Haryana state
The CSA alliance aims to enable 500 million farmers worldwide to practice climate-smart agriculture, thereby increasing agricultural productivity and incomes, strengthening the resilience of food systems and farmers’ livelihoods and curbing the emission of greenhouse gases related to agriculture.

India, home to one of the largest populations of food insecure people in the world, recognises the impending challenge, and the need to adapt. The national budget of July 2014 set up the farmers’ ‘National Adaptation Fund’, worth 16.5 million dollars.

Given that 49 percent of India’s total farmland is irrigated, experts fear the ripple of effects of climate change on the vast, hungry rural population.

Spurred on by organisations and government incentives to switch to a different mode of agriculture, some rural communities are already inventing a workable mix of traditional and modern farming methods, including reviving local seeds, multi-cropping and smart water usage.

CSA: Embraced by some, shunned by others

In Taraori village in the Karnal district of India’s northern Haryana state, 42-year-old Manoj Kumar Munjal, farming 20 hectares, is a convert to climate-smart techniques. And he has good reason.

Scientists project that average temperatures in this northern belt are expected to increase by as much as five degrees Celsius by 2080.

The main crops in Haryana are wheat, rice and maize, with many farmers also dedicated to dairy and vegetables. Of these, wheat is particularly vulnerable to heat stress at critical stages of its growth.

A recent study projects that climate change could reduce wheat yields in India by between six and 23 percent by 2050, and between 15 and 25 percent by 2080.

Haryana has been sliding in food grain production and ranked 6th among Indian states in 2012-13. This bodes badly for the entire country’s food security, as Haryana’s wheat comprises a major part of India’s Public Distribution System (PDS), which allocates highly subsidised grain to the poor.

Some 25 million people live in the state of Haryana alone. Of the 16.5 million who dwell in rural areas, 11.64 percent live below the poverty line.

Munjal, a university graduate, had to take over the farm with his brother when his father suffered a paralytic stroke, but has since changed the way his father grew crops.

Farming the climate-smart way, Munjal’s crop mix includes four acres of maize that need only a fifth of the water that rice consumes.

He opts for direct seeding instead of sapling transplantation, which involves high labour costs and a week of standing water to survive, in addition to being vulnerable to floods and strong winds due to a weak root system.

Munjal’s new methods, moreover, give shorter-cycle harvests and vegetables are grown as a third annual crop, translating into higher income for the farmer.

Other tools like the Leaf Colour Chart and GreenSeeker help Munjal assess the exact fertiliser needs of his crops. Text and voice messages received on his mobile phone about weather forecasts help him to time sowing and irrigation to perfection.

Around 10,000 farmers have adopted climate smart practices in 27 villages in Karnal, according to M L Jat, a cropping systems agronomist with CIMMYT.

They, however, account for a low 20-40 percent of total farmers here.

As global policy negotiations pick up with the upcoming Climate Summit and the 20th session of the Conference of Parties to the United Nations Framework Convention on Climate Change (UNFCCC COP 20) in Lima, Peru, scheduled for December 2014, there appears to be a growing gap between negotiators’ sense of urgency and actual on-the-ground implementation of CSA.

In Taraori village, home to over 1,000 farmers, where climate-smart agriculture was introduced over four years ago, conversion is slow with only 900 acres, out of a total of 2,400 acres of farmland, utilising such practices.

Forty-year-old Vinod Kumar Choudhary tells IPS that “the challenge in inducting farmers” into new models of agriculture, is that the older generation has no faith in the new system, preferring “to stick to tried and tested methods practiced for generations.”

“Any technology introduction must be [accompanied by] a behaviour change, which is slow,” adds Surabhi Mittal, an agricultural economist with CIMMYT.

While water and labour are still available, albeit for an increasingly high price, traditional farmers here say they will continue on as they have before.

The younger crowd believes this mindset needs to change.

“Today climate holds nine out of ten cards determining whether all your labour will come to naught or whether a farmer will reap some harvest,” says 48-year-old Iswar Dayal, a farmer in Birnarayana village, also in Haryana state, which is a major producer of India’s scented Basmati rice, exported mostly to the Middle East.

Therefore Dayal runs two buses, in addition to overseeing seven hectares of farmland that he owns jointly with his brother. Of his two high-school-aged sons, he plans to include the older one, Kusal, in the farm’s management while the younger one, he hopes, will get admission into a foreign university.

“If he gets into one, our life is made,” Dayal says.

From among the 60 families in Dayal’s village of Birnarayana, “only 15 percent of the younger generation are agreeable to continuing with agriculture as their main livelihood,” Dayal tells IPS. “The rest wish to migrate in search of white-collar jobs with assured income.”

India is one of the largest agrarian economies in the world. The farm sector contributed approximately 11 percent of the country’s gross domestic product (GDP) during 2012-2013.

Even though seven out of 10 people – or 833 million of a population of 1.21 billion – depend directly or indirectly on agriculture for a livelihood, the growth rate for the sector was just 1.7 percent in 2012-2013. In comparison, the service sector grew at a rate of 6.6 percent, according to the ministry of agriculture.

The 2011 census found that the number of cultivators across India fell significant over the last decade, from 127 million in 2001 to 118 million at the time of the census. The number of agricultural labourers, however, rose rapidly between 2001 and 2011, from 106 million to 144 million.

The number of small and marginal farmers, who own on average 0.38 to 1.40 hectares of land and constitute 85 percent of Indian farmers – also rose by two percent between 2005 and 2010.

Unless binding international agreements on carbon emissions come into effect almost immediately, India will be saddled with a disaster of almost unimaginable proportions, as the millions of people who eke out a living on tiny plots of earth find their lifeline slipping away from them.

And in the meantime, the country will need to scale up its efforts to ensure that climate-smart agriculture becomes more than just a modernity embraced by the youth and takes root in farming communities all over this vast nation.