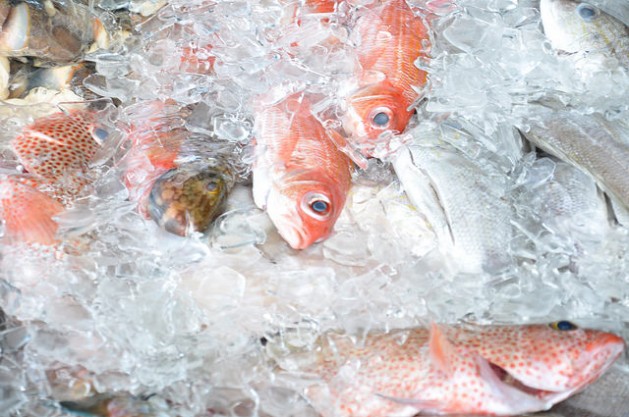 The Caribbean's fishing industry provides direct employment for more than 120,000 people and indirect employment opportunities for thousands of others – particularly women – in processing, marketing, boat-building, net-making and other support services. Credit: Desmond Brown/IPS

PYEONGCHANG, Republic of Korea, Oct 9 2014 (IPS) - Scientists here are warning Caribbean countries, where the fisheries sector is an important source of livelihoods and sustenance, that they should pay close attention to a new international report released Wednesday on ocean acidification.

We’re in a world where the ocean is acidifying very, very, very rapidly and so we need to move very, very quickly.” -- Dr. Carol Turley

“Ocean acidification can have quite specific impacts on certain fisheries, and so actually ocean acidification is especially important for Small Island Developing States (SIDS) and people that rely on specific types of fishery or some type of organism,” Dr. S. J. Hennige, the lead editor of the report, told IPS.

“There are variable responses with organisms with regard to ocean acidification, but for the ones which are negatively affected by it, if you are reliant on just that one type of fish then it could have very large impacts and you may have to actually switch to a different organism or something like that.”

In the report, an international team of 30 experts, led by UK scientists, has concluded that ocean acidification is already underway, and it is now nearly inevitable that it will worsen, causing widespread impacts, mostly deleterious, on marine organisms and ecosystems, and on the goods and services they provide.

David Obura, director of Coastal Oceans Research and Development in the Indian Ocean, said food security, in the Caribbean and other regions of the world where there is heavy reliance on the fisheries sector, is threatened.

“Ocean acidification changes the chemistry of the sea water which means that how fish grow is affected and usually negatively,” Obura told IPS. “So productivity will go down or the certainty of knowing what the output is going to be, how much food is produced, is less certain so it undermines the production system.”

Ten years ago, only a handful of researchers were investigating the biological impacts of ocean acidification. Whilst their results gave cause for concern, it was clear that a lot more measurements and experiments were needed.

Around a thousand published studies later, it has now been established that many marine species will suffer in a high CO2 world, with consequences for human society.

Hennige said there are already examples, in the U.S., where an oyster fishery is being impacted by ocean acidification. He said the underlying cause of the problem is carbon dioxide.

“The more carbon dioxide is released from all our fossil fuels into the atmosphere, the more will dissolve in the ocean,” he explained.

“There are practices which can be put in place to offset it on a temporary basis, but the underlying problem is there is still more carbon dioxide being released into the atmosphere and this problem is only going to get worse if we continue.

“It’s not a problem that is being caused by the Caribbean, this is a global problem and it’s a global solution that’s needed,” Hennige added.

Dr. Susan Singh-Renton, deputy executive director of the Caribbean Regional Fisheries Mechanism (CRFM), told IPS that everything in the report applies to the Caribbean situation.

“Ocean acidification is a worrying phenomenon because it means that seawater, as a supporting medium for life, is changing in a very fundamental manner. Since the ocean ecosystem is so complex, it is not possible to predict the impacts with certainty, but it is certain that the impacts will be significant for tropical islands, especially those which have built their economies based on the health and beauty of their local coral reef ecosystems,” she said.

“As coral reefs begin to decline, this will affect many traditional Caribbean fisheries targeting reef fishes, such as snapper, grouper, parrot fish, etc. that depend on the coral reefs for their food, shelter and survival.

“Also, there would likely be declines in the health and survival of animals that grow carbonate shells such as queen conch, which support very important multi-million-dollar commercial fisheries in the Caribbean. With so fundamental a change in seawater chemistry, it is also possible that other forms of ocean life, as we know them today, could be affected ultimately and irreversibly,” Singh-Renton noted.

The report’s authors said the exact magnitude of the ecological and financial costs is still uncertain, due to complex interactions with other human-driven environmental changes.

They said risks to coral reefs are highlighted in the CBD, due in part to the crucial role they have in helping support the livelihoods of around 400 million people.

Hennige said that the by the end of this century, the economic loss caused by ocean acidification would be “a trillion dollars”.

His colleague, Dr. Carol Turley, a contributing author to the report, said the downward spiral could be reversed but urgent action and funding are needed.

“And that’s where financing comes in because as scientists we can collaborate and give you knowledge but we need financing so that we can help you set up monitoring.

“I am worried that we are too slow. We’re in a world where the ocean is acidifying very, very, very rapidly and so we need to move very, very quickly.”

In 2013, experts warned that the acidity of the world’s oceans may increase by 170 percent by the end of the century, bringing significant economic losses. The scientists said then that marine ecosystems and biodiversity are likely to change as a result of ocean acidification, with far-reaching consequences for humans.

They also warned that economic losses from declines in shellfish aquaculture and the degradation of tropical coral reefs may be substantial owing to the sensitivity of molluscs and corals to ocean acidification.