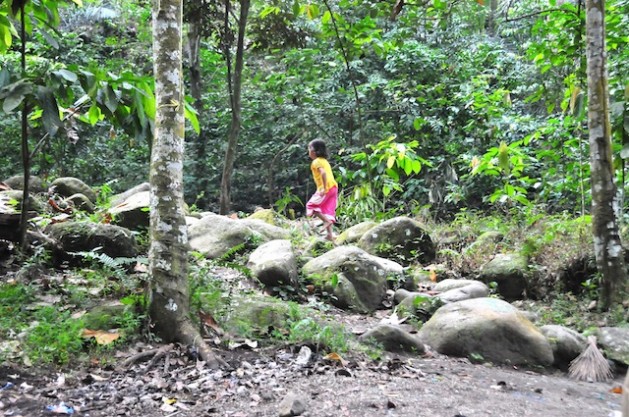 COLOMBO/BALI, Oct 30 2014 (IPS) - Disregarding the rights of indigenous people to their traditional lands is costing companies millions of dollars each year, and costing communities themselves their lives.

A new paper by the Washington-based Rights and Resources Initiative (RRI) released on Oct. 30 found that a significant portion of forests and reserves in emerging markets is being allocated to commercial operations through concessions, ignoring indigenous communities who have lived on them for generations.

“The granting of concessions without the knowledge or approval of people directly affected by them is obviously a human rights issue of grave concern. But it may also have a real financial impact, and this impact concerns more than just those companies with ground-level operations,” the paper said.

“Most of the time [indigenous communities] are working without any kind of protection and taking on groups with lots of money and state support." -- Aleta Baun, 2013 winner of the Goldman Environmental Prize
It noted that indigenous communities inhabit over 99 percent of lands used by commercial entities through concessions. In some instances, large portions of national land are being divested through concessions.

The figure was 40 percent of all land extent in Peru and 30 percent in Indonesia. With Indonesia’s total land extent covering some 1.8 million square km, the portion of land under concession works out to around 500,000 sq km.

“In most cases governments feel that it is easier and simpler to work when they don’t get the indigenous communities involved,” Bryson Ogden, private sector analyst at RRI, told IPS.

But while companies and governments enter into agreements on lands as if they were not inhabited, when work begins on commercial projects it invariably collides head-on with communities who call the same land their traditional home.

The financial damage resulting from such confrontations can run into millions. A recent paper by the U.S. National Academy of Science noted that one company reported a loss of 100 million dollars during a single year, due to stoppages forced by company-community conflict. The company was not named in the report.

RRI’s Ogden said that despite such losses, the global trend still was to sideline indigenous communities when entering into concession agreements. “They remain invisible in most of these contracts.”

Such invisibility on paper can be deadly on the ground. In South Kalimantan, the Indonesian portion of the island of Borneo, serious violence erupted between police and activists during a protest that took place a fortnight ago, Mina Setra, deputy secretary general of Indonesia’s Indigenous Peoples’ Alliance of the Archipelago (AMAN), told IPS.

Such violent altercations are not rare. Earlier this year research by Global Witness, an organisation working on environmental rights, found that between 2002 and 2013 at least 903 citizens engaged in environmental protection work were killed.

During the period under review, according to the report, 41 people were killed in the Philippines because of opposition to mining interests. And in 2012 alone, 68 percent of all land-related murders in Brazil were connected to disputes over deforestation in the Amazon.

The report said that activists facing prosecution lacked local as well as international networks that were tailor-made to assist them.

“The problem we are facing is that there is still no recognition for indigenous peoples’ rights,” AMAN’s Setra said.

For almost four years AMAN and other environmental organisations lobbied the Indonesian parliament to adapt a law that would recognise the rights of indigenous communities. It was to be passed this month, when the government changed, bringing fresh officials into power.

“Now we are back to zero,” Setra said.

RRI’s Ogden said there were signs that some global companies were taking note of the rights of indigenous communities to their land, but AMAN’s Setra said that till there was legal recognition of such rights, commercial agreements were unlikely to include them.

“The companies keep asking us under what terms such communities can be recognized and we have no effective answer until there is a law,” Setra said.

For activists, working in that gray area could turn deadly.

Take the case of Aleta Baun, the Indonesian activist from West Timor, the Indonesia portion of the island of Timor, who in 2000 launched a campaign to stop mining operations that were affecting the lives of her Molo tribe members. She has been waylaid, stabbed and threatened with death and rape.

“Most of the time you are working without any kind of protection and taking on groups with lots of money and state support,” said the 2013 winner of the Goldman Environmental Prize.

In the Paracatu municipality of Brazil, the country’s largest gold mining operation run by a company called Kinross with a total investment of over 570 million dollars has been repeatedly interrupted since 2008 due to conflicts with traditional communities.

The parties signed a new agreement in 2010 that allowed operations to resume in 2011.

In Peru, two dam projects on the Ene-Tambo River have been abandoned after prolonged protests and legal action by the indigenous Ashaninka community, who claim that the projects could displace between 8,000 and 10,000 people.

In 2008 the Tata group pulled out a 350-million-dollar investment from the Indian state of West Bengal, where it intended to produce its signature Nano car, after protests by local communities.

The RRI report said that community rights to forests and other natural reserves were increasingly becoming a factor for commercial operations.

“As we have examined this problem, we have come to think of local populations as a kind of ‘unrecognized counterparty’ to concession agreements. We found that communities often used legal mechanisms to resolve their grievances with concessionaires. This suggests that local communities’ rights over an area have appreciable legal weight, even if government bodies and concessionaires haven’t attributed them much import in the terms of their agreements.”

Until then, indigenous peoples are left facing gigantic commercial entities in a David-and-Goliath scenario that shows no sign of improving in their favour.