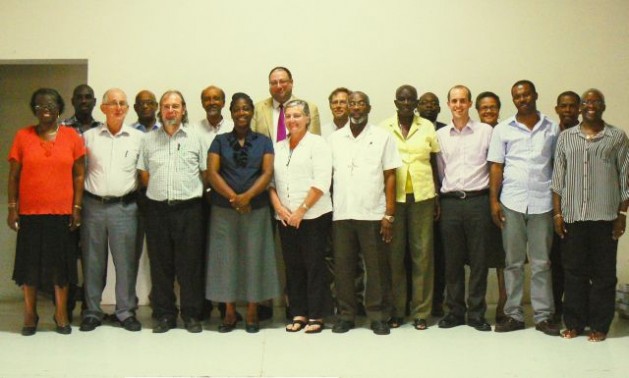 WASHINGTON, May 5 2014 (IPS) - Last Fall, I witnessed the Grenada Council of Churches insert themselves into negotiations between their government and the International Monetary Fund (IMF) around the island’s debt restructuring and presumed austerity policies. Religious leaders called from pulpits across the tiny island for a “Jubilee” or national debt cancellation.

When I recently returned to the Spice Isle, I was awed by what I saw – the religious experiment in Grenada was spreading like wild fire to other Caribbean countries.

"Our churches are on the front lines of fighting poverty in the Caribbean. We see how the debt crisis is hurting the poorest people on the islands." -- Presbyterian Minister Osbert James

At Blessed Sacrament Catholic Church, overlooking the Caribbean Sea, the Caribbean Council of Churches, four Catholic Dioceses and various religious leaders from across the region gathered to launch the Caribbean Debt Network.

They came from St. Vincent’s and The Grenadines, Barbados, Dominica, Trinidad and Tobago, Jamaica and Grenada, knowing their unity is more vital than ever.

Out of the 20 most heavily indebted countries in the world, six are Caribbean countries.

The islands are dotted with makeshift shacks, where depending on the island, 20 percent to 50 percent of the population lives in poverty. Various islands see high unemployment rates from 30 to upwards of 50 percent.

Among most Caribbean tourist areas, you can’t avoid the working poor.

In fact, the plight of the vulnerable along with infrastructure challenges are so palpable on the small islands, you scratch your head wondering why the IMF calls these countries “Middle Income.” When a poor country is defined as Middle Income, they cannot apply for existing debt relief processes such as the Heavily Indebted Poor Countries Initiative or HIPC.

The process by which economists define a country as Middle Income is by averaging the total income of everyone in the country (per capita). In other words if 99 people make one dollar and one person makes 100,000 dollars, the average income per person is 1,001 dollars.

In a place like Grenada, where the poverty rate ranges from 38 to 50 percent, the income levels are skewed. The religious community uses the words “social sin” to describe how income inequality is hidden from us as struggling Caribbean economies are denied relief because of what they are called.

Even with HIPC, any poor country will tell you it’s not a walk in the park. The IMF and other international financial institutions acknowledge that the process offers too little debt relief, too late, with too many benchmarks. However, when struggling economies go through the painful act of debt restructuring without even the framework of HIPC, it’s wrangling a hurricane.

And real hurricanes are real threats. In 2004, 200 percent of Grenada’s GDP was wiped out in three hours by Hurricane Ivan. With powerful hurricanes landing every 10 years and financial crises in other parts of the world impacting the Caribbean’s primary industry of tourism, countries across the region seem destined for never-ending cycles of austerity and debt.

“Our churches are on the front lines of fighting poverty in the Caribbean. We see how the debt crisis is hurting the poorest people on the islands,” notes the new chair of the Caribbean Debt Network, Presbyterian Minister Osbert James.

James’s historic cathedral, among many structures unrepaired since the 2004 Hurricane, still lacks a roof.

While it’s still too early to assess Grenada’s debt restructuring, we can see that the Jubilee model is opening up shop on other Caribbean islands.

At Blessed Sacrament Catholic Church, the regional Caribbean religious leaders launched the new coalition in a conference room aptly named The Upper Room. For Christians, it evokes Pentecost when the Holy Spirit empowered religious leaders to inspire others. Pentecost is derived from the more ancient Jewish holiday, Shavuot, which celebrates the gift of our covenant with God and God’s abundance.

At the founding conference last week, the religious community sought to spread Pentecost and Shavuot. They resolved the following:

1. To raise the awareness of the effects of the sovereign debt on Caribbean Countries

2. To establish a structure within which our countries can resolve indebtedness fairly

3. To build a Jubilee coalition to achieve debt resolution, sustainable development and fiscal responsibility at all levels

4. To illustrate how sovereign debt impacts issues of concern, such as human trafficking, drug trafficking, climate change and HIV/Aids.

5. To work with governments and with our international partners on all aspects of debt

6. To encourage the Governments of Grenada and Antigua & Barbuda to champion the cause of a special initiative for resolving Caribbean indebtedness to achieve a sustainable debt level

Eric LeCompte is the Executive Director of Jubilee USA Network and serves on UN expert working groups that focus on debt restructuring and financial reforms. He recently returned from Grenada where he supported the launch of the Caribbean Debt Network.