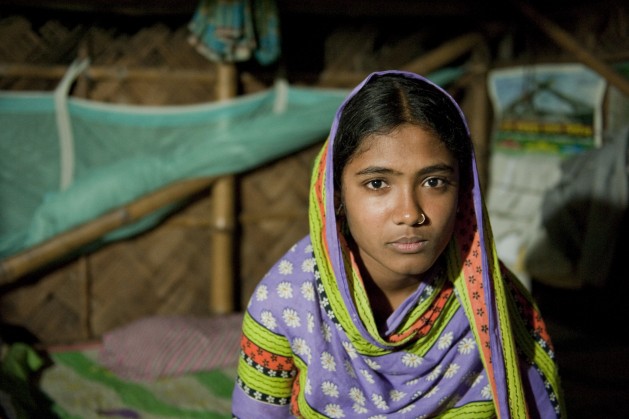 Fatema,15, sits on the bed at her home in Khulna, Bangladesh, in April 2014. Fatema was saved from being married a few weeks earlier. Local child protection committee members stopped the marriage with the help of law enforcement agencies. Credit: UNICEF

At the first Girl Summit in London Wednesday, hosted by the U.K. government and UNICEF, delegates said they wanted to send a strong message that there should be “zero tolerance” for these practices.

“Millions of young girls around the world are in danger of female genital mutilation and child marriage – and of losing their childhoods forever to these harmful practices,” Susan Bissell, UNICEF’s Chief of Child Protection, told IPS.

“Millions of young girls around the world are in danger of female genital mutilation and child marriage – and of losing their childhoods forever to these harmful practices” – Susan Bissell, UNICEF's Chief of Child Protection

“FGM is an excruciatingly painful and terrifying ordeal for young girls. The physical effects can last a lifetime, resulting in horrific infections, difficulty passing urine, infertility and even death.”

Bissell said that when a young girl is married “it tends to mark the end of her education and she’s more likely to have children when she’s still a child herself – with a much higher risk of dying during pregnancy or childbirth”.

“Without firm and accelerated action now, hundreds of millions more girls will suffer permanent damage,” she added in an e-mail interview.

At the summit, the United Kingdom announced an FGM prevention programme, launched by the government’s Department of Health and the National Health Service (NHS) England. Backed by 1.4 million pounds, the programme is designed to improve the way in which the NHS tackles female genital mutilation and “clarify the role of health professionals which is to ‘care, protect, prevent’,” the government said.

According to British Prime Minister David Cameron, some 130,000 people are affected by FGM in the United Kingdom, with “60,000 girls under the age of 15 potentially at risk”, even though the practice is outlawed in the country.

The prevention programme will now make it mandatory for all “acute hospitals” to report the number of patients with FGM to the Department of Health on a monthly basis, as of September of this year.

U.N. officials said that the Girl Summit was a significant development because it marked the importance of the issues addressed.

“International leaders came together in one place and said enough is enough,” Bissell said.

While it is difficult to measure the impact of intensified campaigns on the reductions in child marriage and female genital mutilation/cutting over the past few years, the United Nations and other organisations have noted that the numbers of girls affected are in fact decreasing.

In the Middle East and North Africa, the percentage of women married before age 18 has dropped by about half, from 34 percent to 18 percent over the last three decades, UNICEF says.

In South Asia, the decline has been especially marked for marriages involving girls under age 15, dropping from 32 percent to 17 percent.

“The marriage of girls under age 18, however, is still commonplace,” Bissell told IPS.

“In Indonesia and Morocco, the risk of marrying before age 18 is less than half of what it was three decades ago. In Ethiopia, women aged 20 to 24 are marrying about three years later than their counterparts three decades ago,” she added.

Regarding female genital mutilation/cutting, Kenya and Tanzania have seen rates drop to one-third of their levels three decades ago through a combination of community activism and legislation, while in the Central African Republic, Iraq, Liberia and Nigeria, prevalence of FGM has dropped by as much as half, Bissell said.

However, officials stressed that with population growth, it is possible that progress in reducing child marriage will remain flat unless the commitments made at the Girl Summit are acted upon. Flat progress “isn’t good enough”, Bissell told IPS.

The highest percentage of these women can be found in South Asia, followed by East Asia and the Pacific which is home to 25 percent of girls and women married before the age of 18, UNICEF says.

Statistics also indicate that girls who marry before they turn 18 are less likely to remain in school and more likely to experience domestic violence. In addition, teenage mothers are more at risk from complications in pregnancy and childbirth than women in their 20s; some 70,000 adolescent girls die every year because of such complications, according to the United Nations.

The statistics on female genital mutilation are also cause for international concern, with the United Nations Population Fund (UNFPA) saying that about 125 million girls and women have been subjected to the practice, which can lead to haemorrhage, infection, physical dysfunction, obstructed labour and death.

According to UNFPA, female genital mutilation/cutting and child marriage are human rights violations that both help to perpetuate girls’ low status by impairing their health and long-term development.

UNFPA Executive Director Dr. Babatunde Osotimehin told IPS that a number of states have adopted legislation against female genital mutilation/cutting but that some perpetrators are still operating with “impunity”.

Participating in the London summit, Osotimehin said that certain governments were facing challenges within their own countries because of long-held cultural beliefs, but like Bissell, he said that the picture is not completely bleak, because civil society and grassroots organisations are amplifying their campaigns.

Meanwhile, U.N. officials said it was significant that the summit saw commitment from the African Union and the deputy prime Minister of Ethiopia, as well as from the United States Agency for International Development (USAID) and the U.K. Department for International Development (DfID). The Government of Canada and several other financial supporters also made commitments.

For the executive director of UN Women, Phumzile Mlambo-Ngcuka, the pledges show support for the message of “zero tolerance” of child marriage and FGM that her organisation wishes to send. They are also a strong signal that the practices can be ended in a generation, she told IPS.