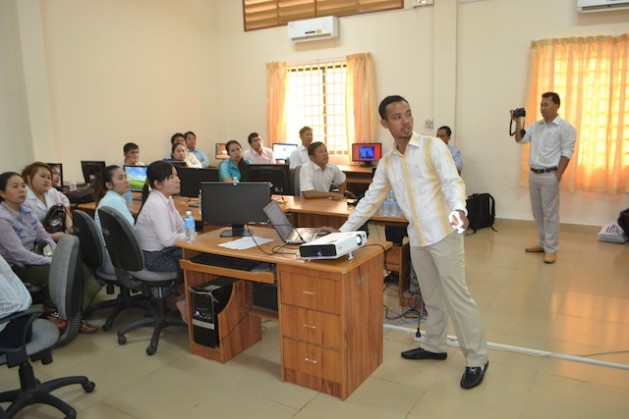 KOH KONG PROVINCE, Cambodia, Nov 5 2014 (IPS) - The transition to puberty can be an awkward experience for youth to navigate. In Cambodia, sex education is moving increasingly into the virtual realm, with the Internet and mobile phones providing welcome spaces for young people to learn, seek help and stay safe.

Illiteracy has been linked with poverty and only 74 percent of rural communities are literate. Cambodia has been heavily influenced by the NGO culture, which has helped bring about some improvements, yet when it comes to sexual and reproductive health and rights (SRHR), these organisations have tended to focus on addressing poor maternal health or at-risk groups, such as entertainment workers.

"This is the difficulty that we experience [in Cambodia: making people aware that counseling is a way of providing emotional support and empowerment as well as exploring options without judgment or assumption.” -- Sean Sok Phay, executive director of Child Helpline Cambodia
Youth, on the other hand, particularly those from poorer families and in rural areas, have not received much attention, particularly those who engage in romantic relationships outside of marriage.

Now, a wave of online learning is filling crucial gaps in the knowledge system.

One such initiative is a major E-learning platform being rolled out with support from the ministry of education, youth and sport (MoEYS), aimed at improving young people’s access to vital information.

“NGOs focus on the population in general, birth spacing, maternal health, but not sweetheart relationships that youth have,” Kuth Sovanno, administrative officer in the school health department of the MoEYS said recently to a roomful of teachers at Koh Kong High School during the launch of the E-learning initiative.

It is being piloted in 24 secondary schools in the provinces of Bantey Meanchey, Battambong, Pursat, Kampong Chhnang, Takeo, Kampot, Koh Kong and Sihanoukville (Kampong Som province) and Phnom Penh. At present, the plan is to expand the programme to reach 100 schools.

Sovanno tells IPS that tapping into social media is a way to get the information out to youth who flock to Facebook to socialise. Youth are beginning to see online access as an important source of information, so the MoEYS maintains an up-to-date website, which is not always the case with the other ministries.

Cambodia’s mobile phone sales have mushroomed, resulting in an estimated 134-percent mobile phone penetration, with cell phones being cheaper than land lines, while social media – accessed through Internet cafes and mobile devices – was believed to have played a major role in the 2013 elections.

In this same way, youth are breaking away from traditional restrictions on sexual and reproductive health education, says Srun Srorn, advisor to One World UK, partnering with the MoEYS to launch the E-learning programme.

Chheon Rachana, a 28-year-old female activist for LGBT issues who teaches about sexual orientation, gender identity and expression for Rainbow Community Kampuchea (RoCK) and CamASEAN, tells IPS that many girls do not talk to their parents or female teachers for advice on seemingly basic topics like menstruation; instead, most reach out to friends.

While some schools make use of NGO support to supply poor rural students with feminine products at school, many girls continue to face challenges in acquiring the most essential products and services.

“Poor girls ask for money from their parents or from someone close to them in their family,” explains Rachana. She herself did not tell her parents when she started menstruating, but had a sympathetic relative help buy her monthly feminine products.

“The traditional Cambodian style of reproductive and sexual health education means that most youth have to find out by themselves by book, [and] share [this information] with their friends because they don’t learn this at school,” Rachana says.

She thinkx the Internet is changing this, though she maintains the importance of accurate information – something that is not always possible given the very nature of the Web.

NGOs such as the Reproductive Health Association of Cambodia (RHAC), which also supports the E-learning initiative, trains peer educators to provide accurate information and emotional support in several provinces but adolescents without access to this especially benefit from mobile, SMS and online counseling.

Sean Sok Phay, executive director of Child Helpline Cambodia, which, along with Inthanou, provides counselors for the new website www.youthchhlat.org, tells IPS, “Online and phone counseling is a new concept in Cambodia. Many people often refer [to] counseling as giving advice or instructing people to do certain thing. This is the difficulty that we experience: making people aware that counseling is a way of providing emotional support and empowerment as well as exploring options without judgment or assumption.”

He describes the service as “pro-poor” and especially helpful for youth in rural areas, as one-on-one counseling can be expensive, while this service is free. The use of mobile phones allows for privacy to talk about these topics either online, by calling or through SMS.

The MoEYS recently published a life skills book for youth that tackles changes in adolescents’ bodies, but also social issues such as drug use and learning about sexually transmitted infections (STIs), which is paired with the E-learning project that has its own curriculum as well.

“Each student has time at the computer already so it will be easier because they are shy to learn [about sexual reproductive health],” Theary, a high school teacher who has taught grades 7-9 at Koh Kong High for the past seven years, tells IPS.

Computer labs, such as the one in Koh Kong High School, will introduce the website’s lessons to students offline first because of the school’s slow Internet connection but they can also access the lessons online at Internet cafes or through mobile phones.

The new website was launched in March of this year.

“Many youth have sex before marriage now, compared to traditional times,” adds Srorn of One World UK, who trains teachers on how to use the E-learning platform.

Koh Kong town, situated close to the Thai border, has many massage parlors and some casinos.

“Middle-class and [upper]-class girls can walk or take a moto bike along the riverside in cities [to meet potential sex partners], while high-class girls go to hip-hop clubs where they can meet a guy. But youth also use the Internet for this. They can use Skype, Facebook messenger and phone sex to hook up.”

Chheon agrees that meeting girlfriends and boyfriends online is common these days. But she says it is important that they meet in public places first and not away from other people for safety reasons.

According to a 2013 U.N. report, 20 percent of men in Cambodia said they had forced a woman to have sex, half of whom claimed to have done so as a teenager.

For those surviving an assault, phone and online counseling can be a lifesaver.

“A girl in a village [who has] been raped … will not only face discrimination, she will have a very difficult time in terms of trauma, stress, and feelings of suicide. Phone counseling, online and text message counseling is playing a role to create the means or opportunity for such a community,” points out Sok Phay from the Child Helpline.

But perhaps what is most urgently needed is information about practicing safer sex.

Monyl Loun, executive director of Inthanou, the other counseling service supporting the project, tells IPS that while love and relationships are “natural” at the age of puberty, the important thing is to learn about the “responsibilities of love, and information to prevent … unintended pregnancy, HIVs and STIs.”

Karaoke videos that play on televisions in buses and even the simplest cafes show romantic partners ending their lives over relationship problems.

“KTV songs and dances are about love, broken hearts and marriage,” explains Srun, adding that most music videos depict couples killing or hurting themselves as a solution to their problems.

But counselors working round the clock in Cambodia hope the new technology-savvy mode of sex education will remind youth that love does not have to end in tragedy.