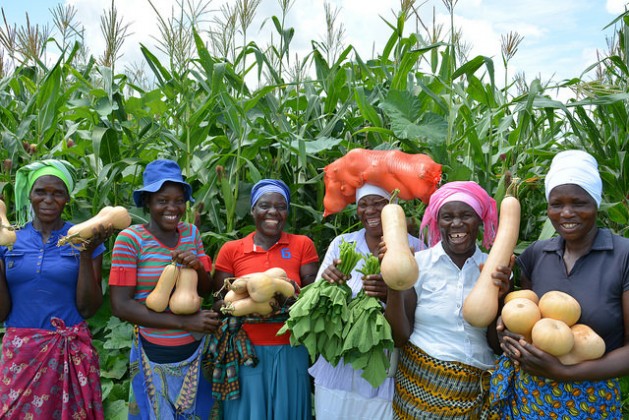 Through the Productive Assets Creation Programme (PAC), WFP in Zimbabwe supported 95,000 people in 2016 through the rehabilitation or creation of community assets, such as water harvesting systems. Photo courtesy of WFP.

HARARE, Jun 5 2017 (IPS) - The shouts can be heard from a distance as one approaches Domboshawa, 30 kilometres northeast of the Zimbabwean capital, Harare.

Tokupai madomasi! Tokupai mbambaira! Do you want tomatoes or sweet potatoes? Mune marii? How much do you have? Scores of women and children carrying bundles of vegetables, sacks of sweet potatoes and containers full of farming produce shout above the din of moving vehicles, trying to sell their produce for a meagre profit.

Tsitsi Machingauta, 32, has a two-hectare farm in the area. She decries the numerous problems faced by smallholder farmers, which range from produce rotting in the fields due to the heavy downpours the country experienced this year, to a poor road network that restricts their access to markets.

“Even when supermarket chains come to buy our produce, they pay very little because we do not have the bargaining power. Because of the poor returns, we struggle to make a living, let alone to send our children to school,” Machingauta told IPS.

Machingauta, who is the founder and director of Women’s Farming Syndicate, an organization that supports women smallholder farmers in Domboshaw), explains how the lack of skills to make use of technology and limited time for training for women – compounded by climate change – has worsened the plight of women in the area.

According to the Ministry of Women’s Affairs, Gender and Community Development (MWAGCD), in Zimbabwe, women make up 70 percent of the rural population and 86 percent of women are involved in farming. Of the smallholder farmers who benefited from the government’s land reform program, only 18 percent are female; for commercial land, women constitute just 12 percent.

According to the U.N. Food and Agriculture Organisation (FAO) report on Small Holders and Family Farmers, if women farmers had the same access to productive resources as men, they could increase yields on their farms by 20-30 percent, lifting 100-150 million people out of hunger.

“LFSP will actively address the specific constraints that smallholder farmers, particularly women, face in raising the productivity of their farms and participating in markets,” says Yesuf. The project covers eight districts in Zimbabwe.

Yesuf said extension services and trainings have been carried out close to homes to avoid disruptions of women’s routines.

“Value chains such as poultry – broilers and indigenous chickens – and groundnuts that are perceived to be dominated by women are also given preference.  This allows women to have some control over incomes that are derived,” Yesuf told IPS.

He said the LFSP would also ensure the following:

The LFSP has employed the Gender Action Learning Systems (GALS) approach which provides safe spaces for communities to integrate decision-making and power relations.

“Through this, households and communities have been engaged to promote non–oppressive practices, recognising the importance of role sharing,” Yesuf told IPS.

As women are known for good saving practices, the LFSP has enhanced and built on such initiatives through the Internal Savings and Lending (ISALs) through training and capacity development and introduction of income-generating activities.

“We started by contributing small amounts of money – as little as three dollars per person,” said Virginia Gomana, a Vavariro group member.

“Now we have ventured into big projects that we never thought we could do, such as goat rearing and market gardening, and this has enabled us to own our own homes. Vavariro has also become a platform where we are able exchange ideas, strengthen our skills,” she said.

Yesuf said that financial institutions have also been tapped to better support the needs of these women.

“Women are accessing loans from Micro-Finance Institutions (MFI) through the group methodology where there is group collateral and guarantorship,” he said.