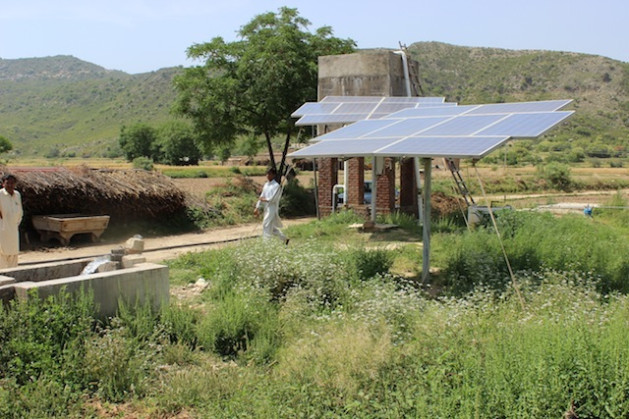 A farmer walks past the solar panels used to pump water in the Soan Valley. Credit: Zofeen Ebrahim/IPS

SOAN VALLEY, Pakistan, May 22 2013 (IPS) - Staring out at his golden wheat field with satisfaction, 50-year old Alamgir Akbar says with a sigh of relief: “We’ve had a good crop this season.”

The farmer has waited a long time to utter those words. A resident of a small rural community on the outskirts of the Ucchali village in the Soan Valley, a 737-square-metre expanse of farmland in the Khushab district of Pakistan’s Punjab province, he has spent five years battling the impacts of a prolonged drought.

With just 12,000 acres of irrigated farmland and only saltwater lakes dotting the landscape, the Valley, which borders the hills of Punjab’s famous Salt Range, is not ideal for practicing agriculture.

Residents traditionally relied on rainwater to recharge their roughly 3,000 community wells, but half a decade of drought in the 1990s brought farming to a standstill and pitched the region’s 150,000 residents into the vortex of poverty.

Farmers here operate smallholdings of no more than five hectares, cultivating crops like cauliflower on flat land as well as terraces and selling the produce in Punjab’s big cities like Lahore, Faisalabad, Sargodha and Gujrat.

Before the drought hit, a farmer could typically earn a net profit of 600 to 800 dollars in a 75-day cropping period, but lost a considerable amount of this income on hiring trucks to transport goods to urban markets.

As the rains became increasingly infrequent, farmers were forced to bore tube wells, some as deep as 200 or 300 feet. This new system required investments in turbines to pump out the water, which in turn generated huge energy costs, as the 26-horsepower machines guzzled gallon after gallon of diesel.

Unable to afford the necessary investments, farmers turned to relatives for loans and sold their animals or other assets to continue farming.

When villagers began to chop down trees for fuel it sparked a process of deforestation, which then “accelerated the rate of soil erosion” and increased the risk of prolonged drought, Gulbaz Afaqi, director of the Soan Valley Development Programme (SVDP), told IPS.

Yields dropped, and farmers like Akbar began to despair.

Driving down the mud track to Ucchali, the tranquil and almost picture-perfect pastoral scene is marred by solar panels.

But what outsiders see as an eyesore, villagers see as an angel of mercy. Owned and operated collectively by 12 families, these three-kilowatt panels are helping to pump water – and new life – into the farmers’ fields.

The landscape is once again alive with patches of cauliflower, coriander, chillies and potatoes as a pilot project spearheaded by the Pakistan Poverty Alleviation Fund (PPAF) begins to bear fruit.

Working with 112 partner organisations in more than 90,000 settlements spread across 120 districts in Pakistan, the fund aims to help this country of 170 million meet the targets defined in the Millennium Development Goals before the 2015 deadline.

Armed with donations from the government, international agencies and corporate entities, the PPAF embarked on a nationwide programme of drought mitigation and disaster management in 2003, which quickly identified the Soan Valley as “one of the areas that needed our attention,” PPAF spokesperson Zaffar Pervez Sabri told IPS.

Determined to avoid the worst-case scenario of locals being forced to sell their livestock or migrate from the Valley, the PPAF developed a “water balance model” to manage and conserve remaining resources and address the impacts of climate change, according to Sabri.

To date, the fund has enabled the construction of 124 irrigation pipes feeding over 8,000 acres of farmland; 60 rainwater harvesting ponds, each about the size of an acre; five delay action dams that collect surface water and are ideal for the Valley’s pitted landscape; 40 check dams, which help to prevent erosion; and 12 natural resource management schemes, benefitting over 100,000 people.

Villagers themselves raised the money for the solar panels that pump the water, giving community members a sense of ownership over the project. “We collected 6,000 dollars from the village, and the fund provided the other 6,000,” Afaqi said. By eliminating the need for diesel pumps, the panels have enabled farm communities to save over 2,000 dollars annually.

Mohammad Ismail, an engineer working with the SVDP, told IPS that pipe irrigation is especially useful on slopes where surface water would otherwise run off.

A 50-percent increase in crop yields after this transition nudged farmers into accepting other, more comprehensive changes in their lives, such as new crops and cropping patterns.

Following the SVDP’s advice, farmers gave up cultivating cauliflower, a water-intensive crop that needs to be watered 16 times in 75 days, in favour of potatoes, “which need to be irrigated only eight times,” a local farmer named Sher Khan told IPS.

Potatoes have become a major cash crop in the area, with 46 percent of irrigated land dedicated solely to their production.

In addition, farmers grow chillies in the summer, wheat in the winter and practice year-round horticulture with nectarines and peaches.

The water scheme has made farming viable once more – with just a single acre of land, according to Afaqi, the average farmer can earn a monthly profit of 1,200 dollars on potatoes, 1,500 dollars on coriander and between 1,000 and 1,500 dollars on wheat.

“With an initial investment of about 1.3 million dollars, combined with technical assistance from the PPAF and hard work by the farming communities, we have created a new economy that generates over six million dollars annually,” said Afaqi.

The programme has also spawned interest in local water conservation efforts, including bi-monthly monitoring of ground water resources at 40 different locations, he added.

Reports from quarterly inspections suggest the groundwater table is improving. Regular monitoring also serves as a kind of early-warning system, by alerting farmers about decreasing water tables ahead of cropping cycles.

For farmers like Akbar, the project has literally helped him and his large extended family – spread between 12 homes in Ucchali – achieve their modest dreams.

“All our children go to school,” he says, pride written all over his face as he conducts a brief tour of his humble brick home. The small, attached toilet at the back symbolises huge progress: “It means we no longer have to go out into the fields to relieve ourselves,” he said with a smile.